Hava Holzhauer Says Sorensen and Moskowitz are ‘Establishment’ candidates, She’s not
The Floridian

*NEW* BUSTED! What Biden’s GOON SQUAD Took From Trump During RAID Has Them In BIG TROUBLE!
America's Freedom Fighters

This is pretty cool.

$22,000 from a hot chocolate stand to help build a wall on America’s southern border?

The kid is only seven and he’s doing big things.

Benton Stevens raised $22k with his hot chocolate stand to help build the wall! We were honored to have him at our ribbon cutting ceremony yesterday for the wall he helped pay for along with all of you who donated. This is only the beginning and we’re excited to keep building more to protect our nation and the legal citizens who proudly call American their home! 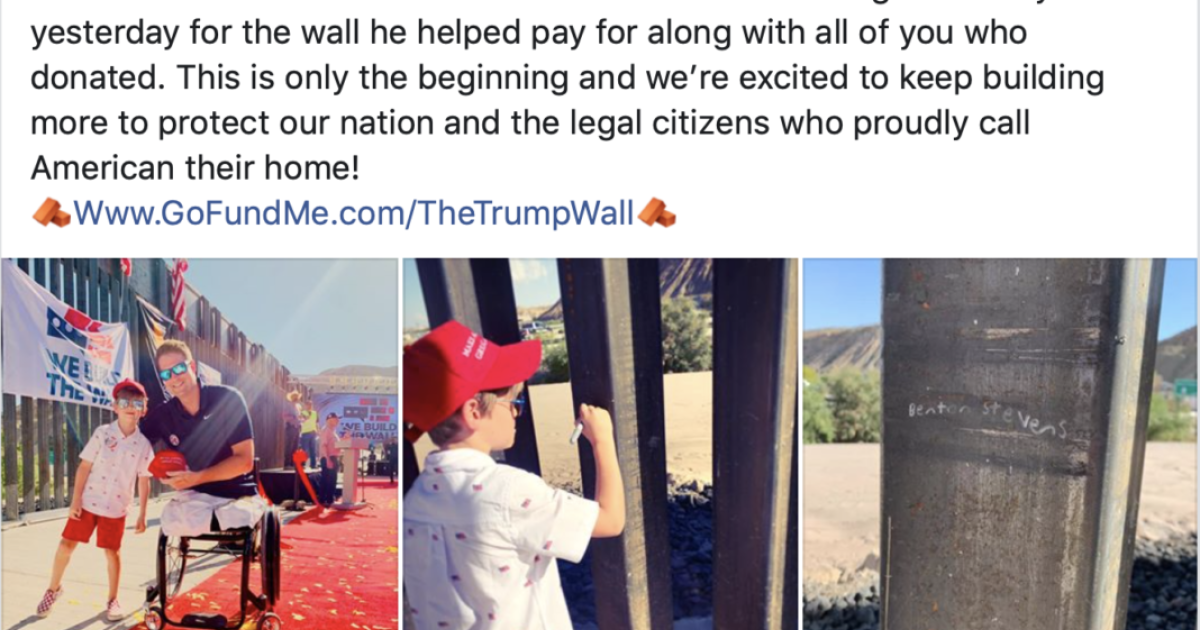 A little American ingenuity was all it took to build a full mile of border wall.

If this isn’t impressive, then what is?

A non-profit organization, backed by Steve Bannon, to fund Donald Trump’s border wall between the United States and Mexico has built its first mile-long section of wall.

The wall, which spans just under one mile in length, went up over the weekend on private property running next to El Paso, Texas, through Sunland Park, New Mexico, triple-amputee veteran Brian Kolfage told DailyMail.com on Monday.

Kolfage noted, “It’s just under one mile long. The wall starts at the Rio Grande River and goes up Mount Cristo Rey where the US Army Corps of engineers said it was impossible to build.”

He added, “We’re going to sell this wall to them for $1 and release the title to them. We can’t give the government the money because that’s not the way it works. But we wanted to show the American people how to get this job done.“

The Michigan Democrat's recent annual financial disclosure shows that she collected at least $15,000 and up to $50,000 in rental income.
By Matthew Holloway, The Western Journal  August 15, 2022 Comment MoreShare

Arizona Announces It's Building Its Own Border Wall: 'The Governor Is Done Waiting for the Biden Admin to Act'

CDC Radically Changes COVID Guidelines, Trashes Guidance It's Urged Us to Follow Since 2020

The Centers for Disease Control and Prevention's announcement represents a major change in how the government deals with the virus.
By Warner Todd Huston, The Western Journal  August 15, 2022 Comment MoreShare

“I am proud to have been part of a team that has helped Floridians through historic challenges, and continues to deliver results."
By Randy DeSoto, The Western Journal  August 15, 2022 Comment MoreShare

2 Months Prior to Raid, FBI Had Already Secured Docs - What Changed?

The last time such an explosion occurred in the town was in 2017, when a gas explosion destroyed a home in the city, killing 2 and wounding 3
By Andrew Jose, The Western Journal  August 14, 2022 Comment MoreShare

The Biden family vacation at a South Carolina mansion will not cost them a thing, according to a new report.
By Jack Davis, The Western Journal  August 14, 2022 Comment MoreShare

The revelation could further undermine national trust in the agency.

Trump Calls for the 'Immediate' Release of Mar-a-Lago Documents: 'The World Is Watching'

The ‘domestic terror’ schtick is back.