Scaros: Dos and Don'ts for Republicans to Remember Ahead of 2024

Camera Catches Face of Last Statewide-Elected Fla. Dem as DeSantis Gets Applause - Her Time Is Ticking

Everyone knows that voter rolls can be notoriously out of date, hence the concern during the 2020 election when some states like California and Nevada chose to send absentee ballots and other states sent absentee ballot applications to every registered voter.

Hence the reason in-person voting with a photo ID is the most secure way to ensure the right person is casting the ballot.

An employee of The Western Journal and her husband moved to Missouri from Arizona over a year ago and notified the state of their move, she said.

The employee, who we’ll call Pam for the sake of the story, recounted, “[W]e sent signed certification to the State of Arizona not long after we registered to vote in MO, confirming that we were no longer Arizona voters.”

Nonetheless, Pam’s husband, who we’ll call Paul, received a mailer addressed to their Missouri home from the Solutions for Arizona PAC, exhorting him to vote a straight Democratic ticket, including for current Secretary of State Katie Hobbs to become Arizona’s next governor.

“My first thought when I got that was, we confirmed to the state of Arizona right after we moved here [last fall] that we were now registered to vote in Missouri,” Paul told The Western Journal in a written statement.

“We should be off the voter rolls. So how did she get my address? And if we’re still on the voter rolls, we’re registered as Republicans, so why did she send a Republican a card to vote for a straight Democrat ticket?” he asked.

Again, to be clear, the Hobbs campaign did not send the mailer, the pro-Hobbs Solutions for Arizona PAC did.

“My other thought was,” Paul continued, “If I contact the Arizona elections department after Election Day, will I find that I ‘voted?’ Or will I get a visit from the sheriff, accusing me of voting in two states?”

The mailer is crafted as an appeal from someone named Heather Carter who said she was a Republican for 35 years, but now claims to be an independent. So her message is, “Join me in leaving the GOP ranks and voting for Democrats.” 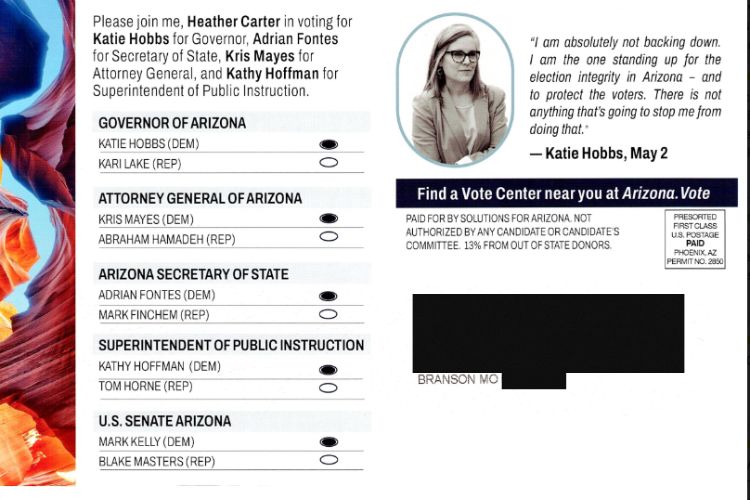 Somehow Solutions for Arizona, which has spent nearly $1 million this election cycle, knew Paul was a registered Republican voter in Arizona and got his Missouri address.

Paul checked the Arizona elections website and could not find that he was still registered in the state, so that’s reassuring.

The vast majority of people, about 80 percent, vote by mail in Arizona. The ballots are not automatically sent out to every registered voter.

Each election cycle I have received a mailing from the Maricopa County Recorder’s office asking if I want to vote by mail.

I have to sign and return it saying I do, so that’s a least some level of voter verification and guard against ballots being sent out willy-nilly.

Of course, Hobbs, who oversaw the 2020 election in Arizona, is very defensive about the integrity of the election process in Arizona.

She came out strongly against the Maricopa County audit last year calling it a “sham,” a “fraudit” and a means to perpetuate “the big lie” about the 2020 race being stolen.

However, the Arizona attorney general’s office released an interim report in the spring uncovering serious issues concerning the handling of over 100,000 mail-in ballots in the county.

“In other words, it is possible that somewhere between 100,000 and 200,000 ballots were transported without proper chain of custody.”

Brnovich also highlighted that Maricopa County has not been forthcoming in turning over all the materials related to the 2020 general election that the AG’s Election Integrity Office has sought despite multiple requests beginning in September 2021 after the Arizona Senate turned over the findings of its audit.

Maricopa County Board of Supervisors Chairman Bill Gates and Maricopa County Recorder Stephen Richer responded in a joint statement at the time, saying, “The Attorney General’s interim report about the 2020 election in Maricopa County includes no new evidence, nothing that would have changed the results and nothing that should lead people to question the overall health of our electoral system.”

In a “60 Minutes” interview that aired Sunday, Brnovich said that his office had not found evidence of significant voter fraud.

Last week, Republican gubernatorial candidate Kari Lake hammered Hobbs for threatening legal action against Cochise County in southeast Arizona after its board of supervisors voted to conduct a full hand count audit of its midterm election results to verify the machine count.

Lake responded, “Despite what Katie Hobbs threatens, the Cochise County Board of Supervisors has every right, as they have just voted to do, to expand the statutory hand count.”

“The statute in question states that a county shall count ‘at least’ two percent of the precincts,” Lake said. “That means a county may count as many additional precincts as it wants to.”

Arizona election law requires a hand count audit: “At least two percent of the precincts in that county, or two precincts, whichever is greater, shall be selected at random from a pool consisting of every precinct in that county.”

Lake also pointed to some significant problems that have occurred during the current election cycle, arguing Hobbs’ failure to understand the plain language of the election law regarding hand count audits is the latest example.

The AP reported that up to 6,000 voters were flagged to receive a “federal only” ballot with no state or local candidates on them and approximately 1,000 of those ballots had been mailed.

Additionally, during the primary election in August, Pinal County, the state’s third most populous, ran out of ballots in more than a dozen polling places, according to NPR.

These foul-ups do not instill confidence in Hobbs’ leadership skills.

Fox News reported last month that Hobbs only showed up at the secretary of state’s office 19 days in the last six months, and now she wants a promotion.

Maybe if she did her job handling oversight of the state’s elections better, there would not be all the problems.

Hobbs obviously is not responsible for Paul in Missouri receiving a mailer promoting her candidacy, but it seems emblematic of her tenure as secretary of state.

The Western Journal reached out to Solutions for Arizona questioning the source of their mailing address list, but received no response at the time of publication.

Randy DeSoto, Western Journal
Herschel Walker Exposes Sick Vote Opponent Made, Brings Victim on to Tell Her Story
David Jeremiah: This Is What Gratitude Does for Others, God and You
Top Investigator in Trump Case Has Disturbing Connections to a Biden Donor and a Film About Obama
Op-Ed: Merrick Garland Just Made the Lives of All Americans More Interesting
Local Business Owner Takes a Page Straight Out of the Bible to Fight Hunger - 'Someone's Gotta Do It'
See more...
Advertisement

Georgians have a choice of whether to ensure their daughters are allowed to compete fairly and stay safe in women's sports.
By Peter Partoll, Western Journal  November 26, 2022 Comment MoreShare

Be intentional about expressing gratitude. It will benefit your Creator, your loved ones, and even yourself.
By David Jeremiah, Western Journal  November 26, 2022 Comment MoreShare

Merrick Garland is sending a message to Trump and his supporters: Shut up and go away, or the regime will make you pay the price.
By Clifford Nichols, Western Journal  November 26, 2022 Comment MoreShare

This just further proves how people were coerced into getting the vaccine by having their livelihoods threatened.
By Peter Partoll, Western Journal  November 26, 2022 Comment MoreShare

One of those receding bodies of water, Lake Shasta, has revealed an interesting relic from America's past; a relic from the Second World War.
By John McCann, Western Journal  November 26, 2022 Comment MoreShare

“Coaches said they didn’t see a blunt hit. You see where he was face-masked partially, but it still caused Tylin’s neck to jerk to the side."
By George Upper, Western Journal  November 26, 2022 Comment MoreShare
Next