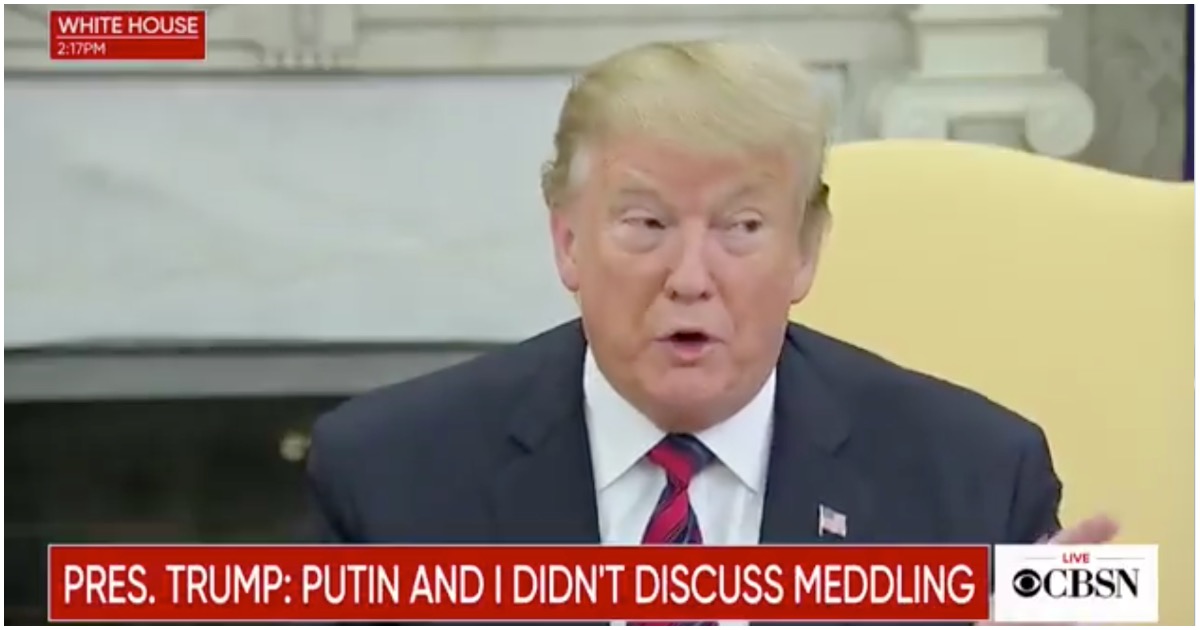 President Trump was happy to talk with reporters from the White House.

He does it all the time.

However, when the commander-in-chief is speaking he does not like to be interrupted. Nobody does, though.

Pres. Trump says he discussed the Mueller report with Putin: “It started off as a mountain and it ended up being a mouse” https://t.co/aYIcGo5zvO pic.twitter.com/o6mQg1UE4u

45 kept his cool and his words resonated.

Another video from the White House:

Trump said Putin is “not looking at all” to get involved in Venezuela” in a phone call that lasted longer than an hour pic.twitter.com/vxfqhGNtpg

Fox News personality Judge Andrew Napolitano has been a supporter of Trump in the past. Nowadays, not so much.

In fact, POTUS has taken notice and he’s not thrilled.

Trump is now saying that Napolitano asked about being nominated to the Supreme Court, to which the president said no.

President Donald Trump tweeted after Saturday’s rally in Wisconsin an attack on Judge Andrew Napolitano, claiming the judge had come to him privately to ask for a Supreme Court nomination.

….Ever since Andrew came to my office to ask that I appoint him to the U.S. Supreme Court, and I said NO, he has been very hostile! Also asked for pardon for his friend. A good “pal” of low ratings Shepard Smith.

….Ever since Andrew came to my office to ask that I appoint him to the U.S. Supreme Court, and I said NO, he has been very hostile! Also asked for pardon for his friend. A good “pal” of low ratings Shepard Smith.

Trump appeared to be referring to the fallout from the recently-released Mueller report, which Napolitano has argued on his Fox Nation show “Judge Napolitano’s Chambers” stands as proof that the president obstructed justice.

It is looking more and more likely that the Supreme Court will allow the citizenship question to be added to the 2020 census.

Democrats are likely to erupt, while conservatives will stand and clap.

Here’s more information about what’s going down, from Bloomberg:

Key U.S. Supreme Court justices seemed inclined to let the Trump administration add a question about citizenship to the 2020 census in a clash that will shape the allocation of congressional seats and federal dollars.

In an 80-minute argument Tuesday that was both technical and combative, Chief Justice John Roberts and Justice Brett Kavanaugh directed almost all their questions to the lawyers challenging the decision to ask about citizenship. Kavanaugh said Congress gave the Commerce secretary “huge discretion” to decide what to ask on the census.

Far-left Justice Sonia Sotomayor noted, “There’s no doubt that people will respond less. That’s been proven in study after study.”

FBI Moves On Dianne Feinstein- Orders Her To Hand Over Documents On Her Husband’s Stock Trades
May 23rd, 2020 DC Dirty Laundry