Expert Warns: “The Job Cuts That Are Coming Are Going To Be Super Brutal”
Conservative Firing Line 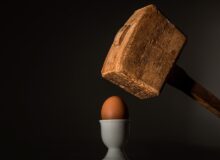 Perhaps the most detrimental influence that we have in this nation is the mainstream media and its social media counterpart.

In fact, there is a rather serious argument to be made that this entertainment product has usurped actual journalism as the main source of information that the average American receives, which is to say that we are no longer being educated properly as to what the world around us is doing.

And it gets worse when we realize that our government has their hands deep within the media influence game a vast amount of the time.

In an email sent to a Facebook employee on April 14, 2021, White House Director of Digital Strategy Rob Flaherty wrote, “Since we’ve been on the phone – the top post about vaccines today is Tucker Carlson saying they don’t work. Yesterday it was Tomi Lahren saying she won’t take one.”

Landry secured the emails through Louisiana and Missouri’s lawsuit against the administration, which alleges it conspired with tech companies to suppress the First Amendment rights of American citizens.

The emails show Flaherty stating, “This is exactly why I want to know what ‘Reduction’ actually looks like — if ‘reduction’ means ‘pumping our most vaccine hesitant audience with Tucker Carlson saying it doesn’t work, then… I’m not sure it’s reduction!”

The platform was eager to work with the White House, too.

Facebook speedily responded, with an employee assuring Flaherty that the company was “running this down.”

In a follow-up email, Facebook also assured the White House that it would censor Robert Kennedy Jr., a vocal vaccine skeptic.

The revelations came shortly before a new release of the Twitter Files, released via journalist and critic of coronavirus policy Alex Berenson, which revealed Pfizer used the same lobbyist as the White House to pressure the platform to suppress debate on coronavirus vaccines.

This ridiculous interference with the narrative of the nation at large not only demonstrates the collusion between Silicon Valley and Washington DC, but reminds us that we are being conditioned by those in power as opposed to having our public servants working for us.

Andrew West
As a lifelong advocate for the dream promised us in the Constitution, Andrew West has spent his years authoring lush prose editorial dirges regarding America's fall from grace and her path back to prosperity. When West isn't railing against the offensive whims of the mainstream media or the ideological cruelty that is so rampant in the US, he spends his time seeking adventurous new food and fermented beverages, with the occasional round of golf peppered in.
Classified Docs Found at ANOTHER Vice President's Home
Schaftlein Report: How many More Classified Documents Exist?
Scientists Make STUNNING Change to 'Doomsday Clock'
AXIS OF EVIL: White House Accuses ANOTHER Country of Helping Russia
Biden Admin Official Had Extended Contact with Hunter Biden Prior to...
See more...
Advertisement