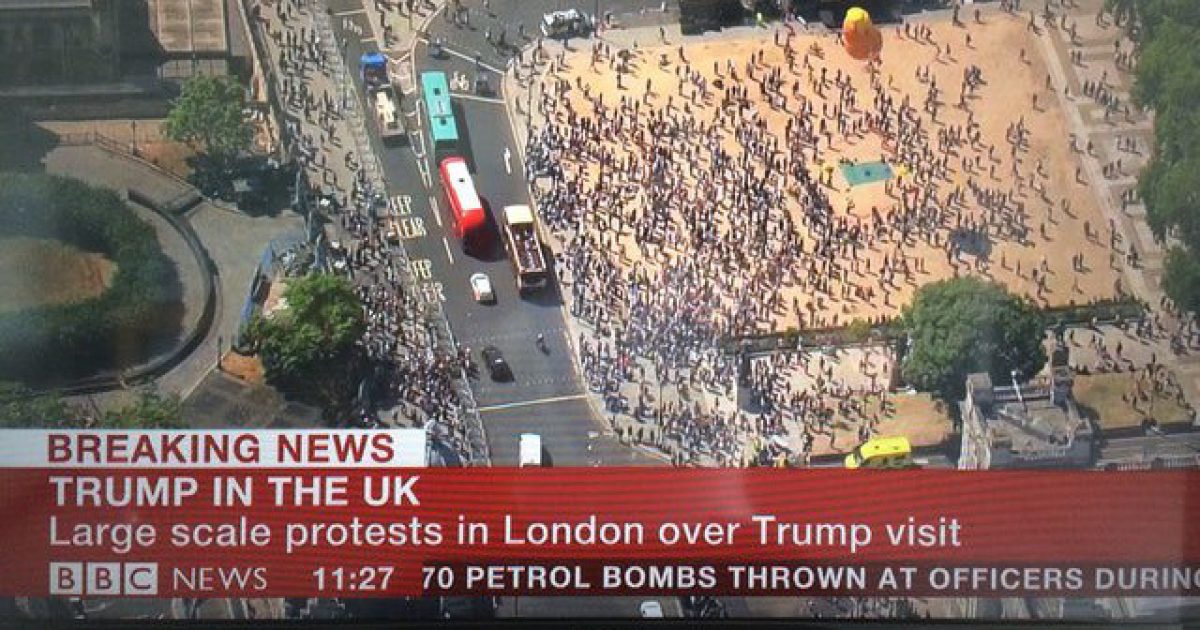 Folks in London have gathered to protest against President Trump since he is visiting the country on diplomatic business, opting to fly “baby Trump” balloons, hold protest signs, and no doubt show up later in the evening to burn some stuff and riot.

After all, that’s what the left, no matter what country they are from, excel at.

The way the mainstream media is reporting these events you would think there’s like 200,000 people in attendance, but as usual, there’s a lack of journalistic integrity at work here. In fact, the attendance thus far has been pretty lackluster.

One march started at 11 a.m. London time with another at 2 p.m. But if pictures from the first march are any indication, estimates of 200,000 angry protesters clogging the city streets might be heavily exaggerated.

President Trump is mostly staying away from London. Saying he has been told that a 20-foot “Trump Baby” blimp will be flown above Parliament Square today, he said: “I guess when they put out blimps to make me feel unwelcome, no reason for me to go to London.”

The mainstream media also played up a planned protest in Brussels on Wednesday dubbed “Make Peace Great Again.” Over and over, organizers said thousands of protesters were set to gather outside the NATO summit to protest Trump.

But only a couple of dozen people actually showed up.

The vast majority of people in the U.K. are not in the slightest bit concerned about President Trump being in the country. They have their own lives to live and are more focused on just getting through the day.

People in America are the same way, which is a fact the left has a hard time wrapping their minds around. The anti-Trump crowd might be vocal, but they lack numbers. They attempt to conflate the numbers to make it appear as though they have a lot of folks on their side, but they don’t.

The real tragedy here is the lack of integrity in the media. They are supposed to be holding all people accountable to the law by reporting the facts, but instead, they choose to push an agenda. And to top it all off, it’s not even a good agenda. It’s destructive to our prosperity.

These people need to get with it.

Academics Who ‘Sellout’ Leftism Beware, Hillary’s Campaign Press Secretary is Coming After You