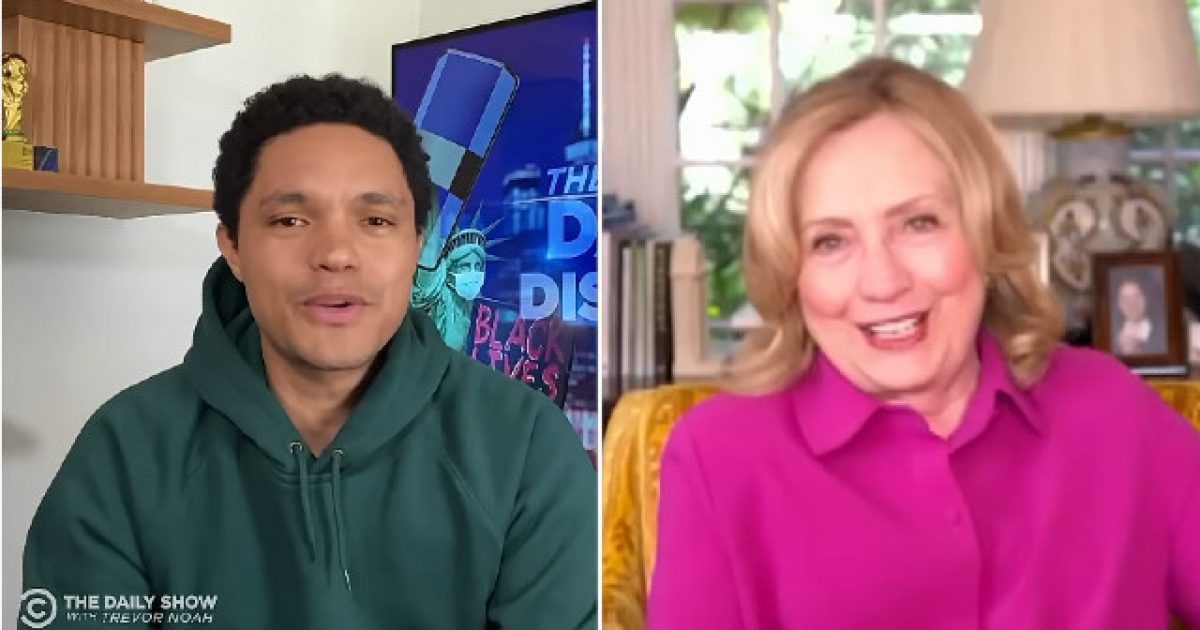 Twice failed Democratic presidential candidate and former Secretary of State Hillary Clinton continues to demonstrate that she’s sour over the major defeat she suffered at the hands of Donald Trump by spouting off all sorts of nonsense conspiracy theories about the president not leaving office if he loses the election this year.

Obviously, this is nothing more than an attempt to fear monger and try making liberals shake in their boots and show up en masse to defeat the president in November. The more scared the left keeps people, the more they will refuse to see the truth behind what is happening in our country, believing that the only way to stay safe from the big, bad president is through liberal policies.

Clinton conducted an interview with Trevor Noah from The Daily Show where she discussed mail-in ballots and potential voter suppression.

Noah asked Clinton if there was a scenario she could envision in which the president loses the election but argues that a couple instances of voter fraud are enough to invalidate of the election results.

“Well, I think it is a fair point to raise as to whether or not, if he loses, he’s going to go quietly or not. And we have to be ready for that. But there have been so many academic studies and other analyses, which point out that it’s just an inaccurate, fraudulent claim,” she said in reference to Republican claims about the potential for widespread voter fraud via mail-in ballots.

Voting by mail, a longstanding practice, has been fiercely debated as more election officials have expanded access to absentee voting during the coronavirus pandemic.

“Look, I want a fair election. If people get to vote and they, for whatever reason, vote for Donald Trump, OK, we’ll accept it. Not happily,” the former secretary of state added, before noting that she doesn’t expect the president to win reelection if more people can vote in-person or by mail.

Well, seeing as how the Democratic Party didn’t accept President Trump’s victory the first time around, you’ll have to excuse my laughter at the possibility they would willingly accept a second term for him without the same kind of fit-throwing they’ve done for the last three years.

Look, one of the things that has managed to win so many people over to Trump is his strict adherence to the Constitution. He’s really done a good job of not overstepping his power. At least when compared to other recent presidents. The chances he’d try to stay in power are non-existent. If he loses, he’ll leave office as the Constitution states he must.

This is a tinfoil hate conspiracy perpetrated by the radical left. It’s time for these folks to switch to decafe.