And they wonder why we don’t trust the media?

Wrap your head around this: Lindsey Graham was recently asked in an interview to respond to Trump’s controversial comments on Dr. Christine Ford made during a Mississippi rally when he mocked Ford for saying “I don’t know” so frequently during her Senate Judiciary Committee hearing last week.

Graham openly denounced what the President said, and referenced a Clinton-era quote from Democratic operative James Carville in which he completely smeared Paula Jones as a paid “trailer park” player for accusing then-President Clinton of sexual harassment.

Yahoo News, reporting on the interview, tweeted out this quote…as if Graham had said it himself.

That is blatantly fake news no matter how you spin it. 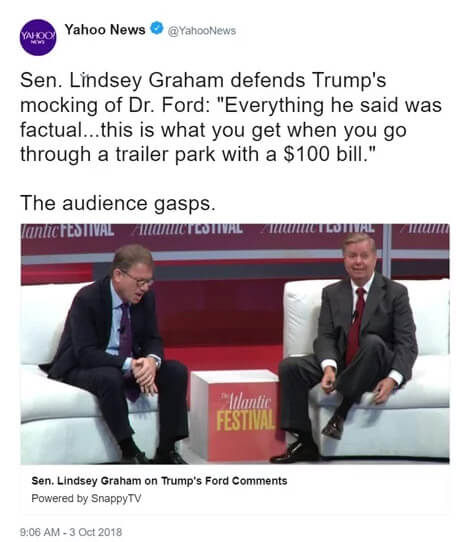 “Sen. Lindsey Graham defends Trump’s mocking of Dr. Ford: ‘Everything he said was factual…this is what you get when you go through a trailer park with a $100 bill,’” Yahoo News wrote on Twitter. “The audience gasps.”

Here’s the thing: as The Washington Post was forced to clarify, while Graham said that…he was referencing what Carville said in the early 90’s about Paula Jones.

Here are his full comments, as reported by Conservative Tribune:

During a chat with the editor-in-chief of The Atlantic, Senator Graham was asked to comment on a “personal, degrading attack” — those were the totally unbiased interviewer’s words — from President Trump questioning Ford’s testimony.

“Here’s what’s personally degrading: ‘This is what you get when you go through a trailer park with a hundred dollar bill,’” Graham said, quoting what a Democrat said in the 1990s about a female accuser.

Do you see the trick? By removing the context of Graham holding up Carville’s past words as an example of a truly degrading statement, Yahoo flipped his meaning 180 degrees. The Senator was criticizing people who degrade credible female accusers, whether they be Paula Jones or Ford.

“Graham went on to say he believed Ford was ‘treated respectfully’ by the prosecutor who questioned her before the Senate Judiciary Committee last week,” The National Review reported.

In fact, Graham also called out Trump for his recent off-the-cuff comments about Kavanaugh’s accuser.

“So President Trump went through a factual rendition that I didn’t particularly like and I would tell him, ‘Knock it off, you’re not helping,’” the Republican senator scolded.

Despite the fact that several outlets also had to clarify that the “trailer park” comment wasn’t Graham’s own, several on the left still cluelessly ran with it, like The Young Turk’s contributor John Iadarola who tweeted:

Lindsey Graham on Christine Blasey Ford: "This is what happens when you go through a trailer park with a $100 bill."

And on Donald Trump viciously mocking a sexual assault victim: "Everything he said was factually true." pic.twitter.com/ZPJEDJaxjg

I don’t know if this guy is honestly confused or if he’s really this deliberately deceptive, but either way, he blatantly misled his 130K+ followers who fell for it hook, line, and sinker.