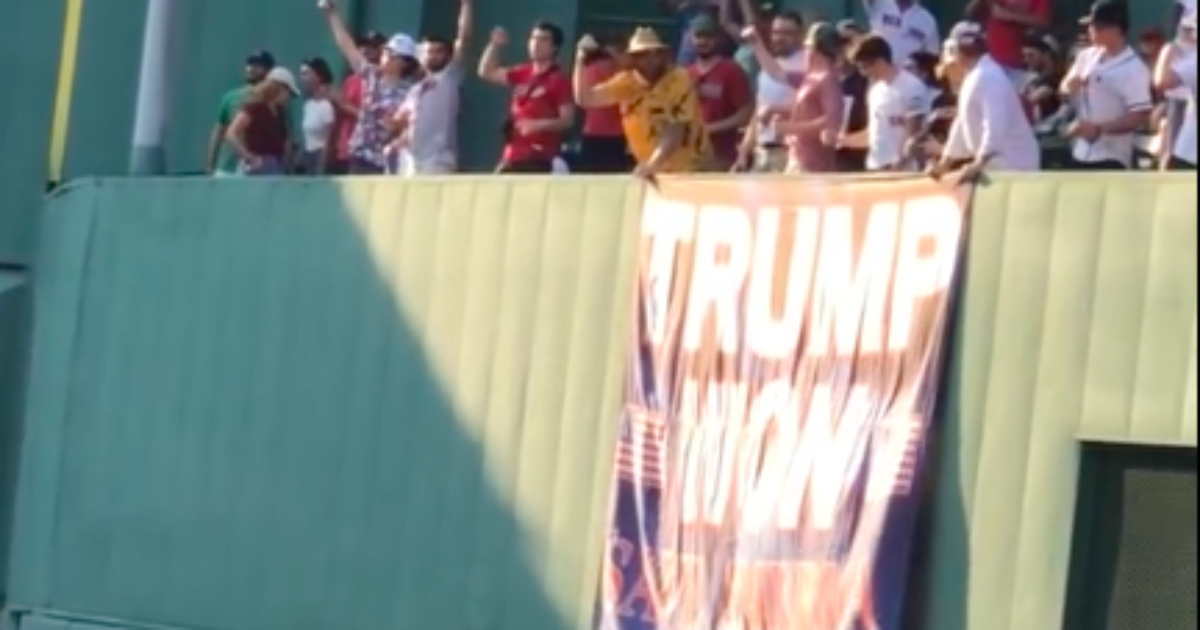 Donald Trump and his legion of supporters have long insisted that something wasn’t quite right about the 2020 election, and, even months after Joe Biden’s inauguration, there appears to be a great deal of advocacy ongoing among the MAGA masses.

Talk of such electoral malfeasance has been largely muted online, thanks to the algorithmic censorship of platforms such as Facebook and Twitter, leaving those who continue to doubt the results of that election to find more traditional means of spreading their message.

This has included a number of stunts at high-profile sporting events, the latest of which took place this week at Boston’s historic Fenway Park.

A spectator at Fenway Park in Boston on Monday night drew cheers, though not the way he wanted to. The fan, who was not identified, was kicked out of the ballpark after raising a banner saying “Trump Won Save America” over the center field wall in the fourth inning of the Red Sox game. He was promptly escorted out of Fenway’s bleachers, the Hill reports. A Red Sox spokesperson said signs are not allowed to be hung or affixed to the stadium.

Video of the incident was soon lighting up social media.

Trump Won Fenway. In Boston the players, staff and fans were all cheering for Trump. #TrumpWon #SaveAmerica https://t.co/5p0cmA6tUJ pic.twitter.com/ADNKOBi87v

Similar displays have occurred at a number of baseball stadiums in the northeast, including last month at Yankee Stadium.

Donald Trump’s legal challenges to the 2020 election have been largely ignored by the judicial system, and a number of his acquaintances have been served with defamation lawsuits in regard to their comments regarding a company whose machines were integral in recording the vote.

Schaftlein Report: Economist Jerry Bowyer Discusses Everything About the Economy