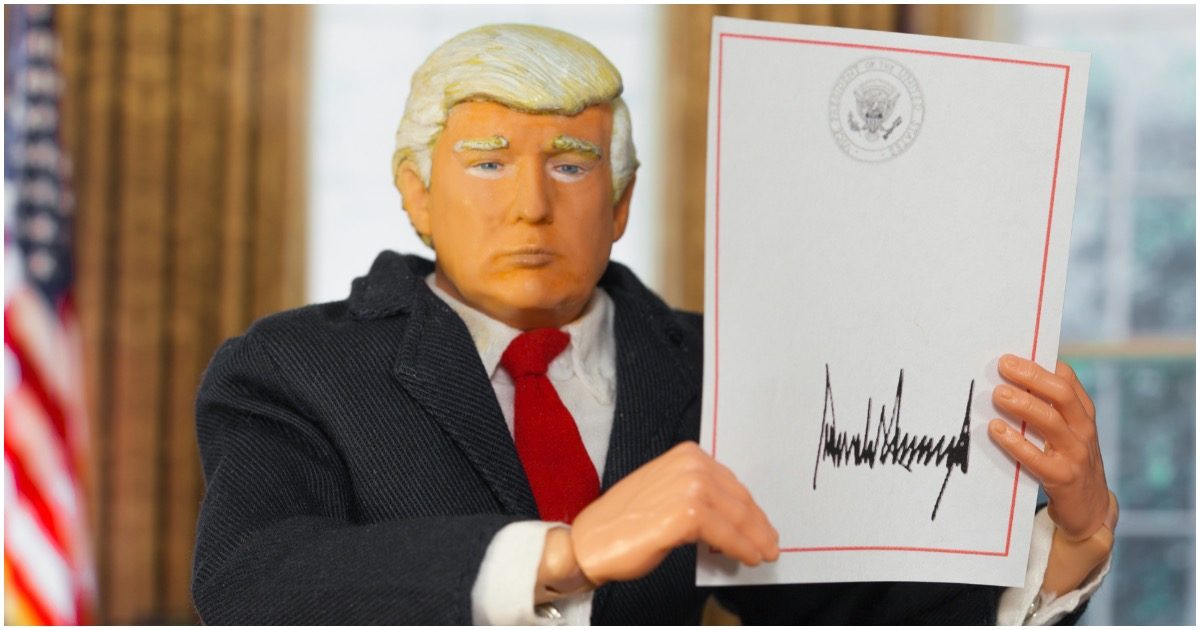 After watching far-left vandals attempt to rip down the statue of former President Andrew Jackson right in front of the White House, President Trump has decided to put his foot down.

Don’t protect your monuments, don’t get any cash.

President Donald Trump announced late Friday that his administration would be enforcing federal provisions demanding that cities and states protect monuments paid for by the federal government and threatening those who pull down monuments with “long prison time.”

Trump tweeted about the executive order on Saturday, calling it a “strong” response to efforts, across the country, to pull down monuments deemed “racist” or “controversial.”

Trump wrote in a tweet, “I just had the privilege of signing a very strong Executive Order protecting American Monuments, Memorials, and Statues – and combatting recent Criminal Violence. Long prison terms for these lawless acts against our Great Country!”

Check this out, via NBC Philadelphia:

Protests became tense Monday evening as police pushed demonstrators away from the statue of President Andrew Jackson in Lafayette Square.

Some protesters threw objects at officers while they tried to remove the tents, police said.

Rioters are trying to tear down the Andrew Jackson statue in Lafayette Square in front of the White House.

And then the cops showed up…

DC Park Police took care of the “peaceful protesters” that were trying to pull down Andrew Jackson. pic.twitter.com/tZglvlYB3V

Police have arrived and are taking back Lafayette Square outside the White House. Chemical irritants are being used on protesters. It’s incredibly tense. pic.twitter.com/JsLc2ts6L4

Protesters were out in full force, too!

2020 has forever changed America, just like the radical Islamic attack on the Twin Towers forever changed the world. Going forward, nothing will be the same. No statue is safe. No job is secure. Even free speech may soon be a thing of the past, if the left keeps getting their way. Check out some CNN nonsense from Friday afternoon, via The Daily Wire: In a report on Friday marking America’s Independence Day, CNN reporter Leyla Santiago, reporting from Mount Rushmore, where President Trump spoke, referred to Presidents George Washington and Thomas Jefferson not as two of the greatest presidents in America’s history, but simply as “two slave owners.” Santiago pandered, “Kicking off the Independence Day Weekend, President Trump will be at Mount Rushmore, where he’ll be standing in front of a monument of two slave owners and on land wrestled away from Native Americans told that uh, be focusing on the effort to ‘tear down our country’s history.'” WATCH: https://twitter.com/tomselliott/status/1279148978576261120?ref_src=twsrc%5Etfw%7Ctwcamp%5Etweetembed%7Ctwterm%5E1279148978576261120%7Ctwgr%5E&ref_url=https%3A%2F%2Fwww.dailywire.com%2Fnews%2Fwatch-cnn-chyron-mocks-independence-day-cnn-reporter-at-mt-rushmore-refers-to-washington-jefferson-as-slave-owners Meanwhile, far-left protesters were doing their thing… https://twitter.com/DailyCaller/status/1279186186922332161?ref_src=twsrc%5Etfw%7Ctwcamp%5Etweetembed%7Ctwterm%5E1279186186922332161%7Ctwgr%5E&ref_url=https%3A%2F%2Ftherightscoop.com%2Fprotesters-are-slashing-car-tires-to-stop-trump-event-at-mt-rushmore-national-guard-called-out%2F https://twitter.com/EEBormett/status/1279190930826973185?ref_src=twsrc%5Etfw%7Ctwcamp%5Etweetembed%7Ctwterm%5E1279190930826973185%7Ctwgr%5E&ref_url=https%3A%2F%2Ftherightscoop.com%2Fprotesters-are-slashing-car-tires-to-stop-trump-event-at-mt-rushmore-national-guard-called-out%2F https://twitter.com/EEBormett/status/1279200052515344392?ref_src=twsrc%5Etfw%7Ctwcamp%5Etweetembed%7Ctwterm%5E1279200052515344392%7Ctwgr%5E&ref_url=https%3A%2F%2Ftherightscoop.com%2Fprotesters-are-slashing-car-tires-to-stop-trump-event-at-mt-rushmore-national-guard-called-out%2F VIDEO: https://www.youtube.com/watch?v=YXxPVNkR4qw&feature=emb_title

Funny how that works!

Donald Trump could literally quote Barack Obama, Hillary Clinton, or Bernie Sanders verbatim and he’d still be accused of racism, sexism, xenophobia, and everything else under the sun. Just for fun, POTUS should recite an Obama speech before a rally crowd and watch as the mainstream media melts down. That would be legen…wait for it…dary. LOOK: https://twitter.com/AZachParkinson/status/1279175939709120513?ref_src=twsrc%5Etfw%7Ctwcamp%5Etweetembed%7Ctwterm%5E1279175939709120513%7Ctwgr%5E&ref_url=https%3A%2F%2Ftherightscoop.com%2Fmedia-ignored-the-racist-history-of-mount-rushmore-when-democrats-visited-the-monument%2F https://twitter.com/AZachParkinson/status/1279186495736332290?ref_src=twsrc%5Etfw%7Ctwcamp%5Etweetembed%7Ctwterm%5E1279186495736332290%7Ctwgr%5E&ref_url=https%3A%2F%2Ftherightscoop.com%2Fmedia-ignored-the-racist-history-of-mount-rushmore-when-democrats-visited-the-monument%2F https://twitter.com/BlackCa58774349/status/1279225559076286466?ref_src=twsrc%5Etfw%7Ctwcamp%5Etweetembed%7Ctwterm%5E1279225559076286466%7Ctwgr%5E&ref_url=https%3A%2F%2Ftherightscoop.com%2Fmedia-ignored-the-racist-history-of-mount-rushmore-when-democrats-visited-the-monument%2F From Rapid City Journal, circa 2012: KEYSTONE — First Lady Michelle Obama and her daughters, Sasha and Malia, showed a hankering for history Wednesday during a brief visit to Mount Rushmore National Memorial. […] Pennington County Sheriff Kevin Thom said after the Obamas had departed Wednesday that Secret Service agents were in town days in advance preparing for the visit. The Secret Service worked with the sheriff’s office, the South Dakota Highway Patrol, the Rapid City Police Department and the state Division of Criminal Investigation, as well as the National Park Service, on security, traffic control and transportation during the stop. H/T: Right Scoop

Protesters were out in full force, too!

Funny how that works!

Schiff Knew About ‘Bounties’ On US Soldiers, But Stayed Silent & Did Not Tell Congress
July 2nd, 2020 Flag And Cross

I am a Pro-USA, Pro-Military, Pro-Trump, Pro-ductive Unisex T-shirt