Biden Points and Says 'That Guy' Is the CDC Director, But There's One Major Problem 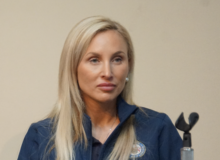 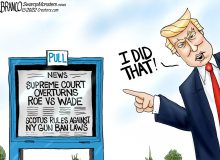 When firefighters in Sacramento, California, showed up to a blaze last week, they walked away from the scene with one more in their crew than they arrived with.

A fire had broken out Tuesday under the eastbound Interstate 80 bridge. It was fueled by debris from the homeless people who gather there.

As firefighters were battling the blaze, they noticed a small puppy with pieces of burnt plastic stuck to his dirty body.

The dog had no tags and didn’t seem to be owned by anyone, and the crew knew they couldn’t just leave him there. The captain who was on the scene immediately knew who to call.

Firefighter Mike Thawley is something of a dog person, becoming internet famous a few years ago for fostering a mangey abandoned pit bull who’d been left chained to a fence and was rescued by the fire department. That dog, named Chunk, became a foster fail — Thawley adopted her permanently and gained quite the following.

When the captain asked if he’d be interested in another foster, he couldn’t pass up the little fellow.

“He said, ‘Do you want him?’ And I said yes,” Thawley said of the short exchange and quick decision, according to KOVR-TV.

“He had a lot more plastic, burned plastic, on the top of his fur area on his back, top of his head,” Thawley said. “He’s still got a little bit down below, a little burn on the back hind leg.

“Perked up pretty good after we gave him some water, some food, gave him a bath, started picking off some of the plastic and then yesterday kinda personality started coming out: Following us around, tail wagging.”

The pup will be offered for adoption through the city’s Front Street Animal Shelter while Thawley continues to care for him — if he doesn’t foster fail again, that is.

“While responding to a fire underneath eastbound I-80 just west of Norwood Avenue, Sacramento firefighters found a small puppy,” the Sacramento Fire Department’s Facebook post said.

“The puppy didn’t have a name tag. So, animal control will be taking the puppy to Front Street Animal Shelter — City of Sacramento.

“In the meantime, we need your help to try to figure out a name for this puppy.”

Many people have suggested the name “Lucky.”

The dog has received a lot of media attention for his story, and many have hinted that he would make a great fire station dog.

Ice cream company Ben & Jerry's has been extremely leftist since day one, but now their extremism has landed them in court.
By Warner Todd Huston, The Western Journal  June 25, 2022 Comment MoreShare

Paul Pelosi has been officially charged in connection with a May road collision. But crucial footage hasn't been released.
By Jack Davis, The Western Journal  June 25, 2022 Comment MoreShare

Sure, she looked good in the video - until the entire clip came out. Then, she looked as bad as ever, and the propaganda looked worse.
By C. Douglas Golden, The Western Journal  June 25, 2022 Comment MoreShare

Not so long ago, 'mean' was a charge made exclusively by the left against any and all conservatives. My, how the times have changed.
By Bob Ehrlich, The Western Journal  June 24, 2022 Comment MoreShare
Next