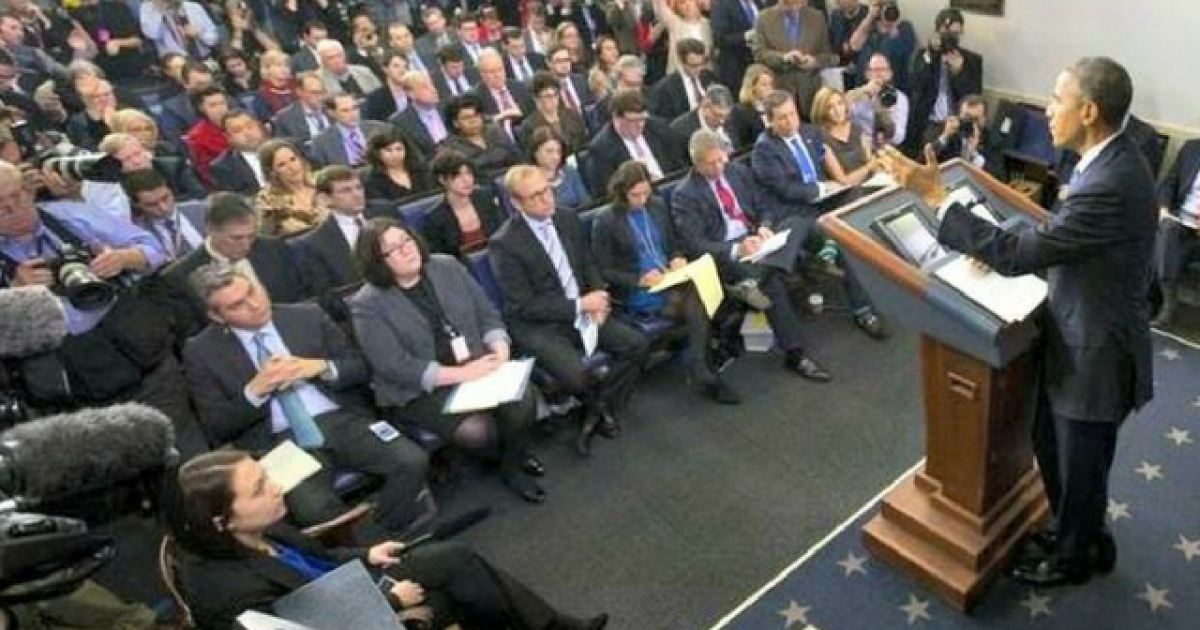 The media has been having an absolute feeding frenzy over the White House’s decision to bar CNN reporter Kaitlan Collins from a press event after she rudely refused to stop asking the President questions or even leave the Oval Office after an event with EU leaders.

Of course, the way the media, and Collins herself, spun the story, she was barred from the event because she had bravely asked hard-hitting questions that embarrassed Trump and sent him into an anti-First Amendment rage,  and Trump is now in a dark, smoky room somewhere plotting to imprison and assassinate the brave reports of the networks he hates.

How do you think this same media responded, though, when Obama rudely ejected a pushy journalist from a press event?

Very differently, as you’ve probably already guess. In fact, the rest of the press pool present at the time actually cheered when the person, a transgender activist pressing the President on the deportation of LGBT individuals (that’s right, Obama deported tons of illegal immigrants) was kicked out of the presser.

One Twitter user offered to refresh the media’s memory:

Here's former President Obama having a reporter removed for interrupting him "in his house" the press claps wildly, even starts chanting Obama's name while the reporter is being removed for yelling "NO MORE DEPORTATIONS" #KaitlanCollins cc: @BretBaier pic.twitter.com/FuAuTEmG1Y

The man removed by Obama was an undocumented, trans advocate GASP how could he do that AT an #LGBTQ event? #FreedomOfSpeechDay @CNN knows this they reported about it and praised @BarackObama https://t.co/Wr39AsYN69 pic.twitter.com/pg7nnjQS1W

Then there was the time a Washington Free Beacon reporter was kicked out of an event:

2015 Washington Free Beacon's Adam Kredo ejected from a State Department media briefing in Vienna and senior department officials threatened to call security on him, without him even saying a word. Had to control that #IranDeal narriative #KaitlanCollins https://t.co/1TP3XjjBPA pic.twitter.com/60Ie76VIU6

2012 @politico called interrupting the President a "surprising breach of etiquette" and later the reporter from @DailyCaller was "urged" to and DID apologize to then President Obama #KaitlanCollins https://t.co/SHPGccrS4e pic.twitter.com/7ipaSNhwaz

And it goes on and on:

Here's a Female, African American reporter with White House Press credentials being carried away by Secret Service in 2009 for attempting to ask President Obama to protect "traditional marriage"#KaitlanCollins https://t.co/t2UFivG6Z4 pic.twitter.com/WHLH8s4tzi

When Obama had a journalist removed for heckling @wolfblitzer on @CNN called it an ugly incident that the President handled well????#AttackOnMedia #LastWord@realDonaldTrump #KaitlanCollins pic.twitter.com/l0gakNDGZ7

Here's @joshearnest in 2009 bragging about how well the Admin had demonstrated their ability and willingness to exclude @FoxNews from significant interviews to the Assistant Secretary of public Affairs #KaitlanCollins https://t.co/o98xlRMJuP pic.twitter.com/NUidMFtfO4

Tell me again how Trump hates the First Amendment?

Harvard Sorority Goes Gender-Neutral, and The Reason Why Is Infuriating