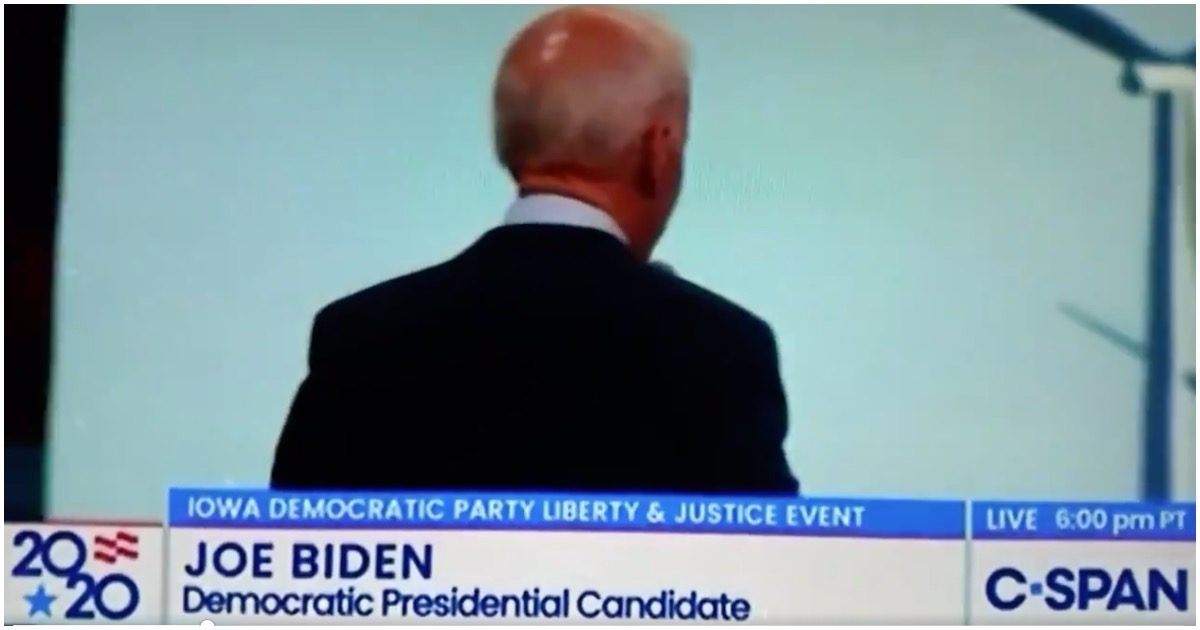 There’s nothing “Democratic” about the way Democrats go about their business. Therefore, if you haven’t done so already, it’s time to stop referring to them as the Democratic Party. They are the Democrat Party.

What Democrats love above all else is power and they will do everything possible to ensure they keep it, while convincing the uninformed they have their best interests at heart.

Attempting to enforce socialist policies is kind of a give away.

Check out the 2020 Democrat frontrunner speaking to a screen because he’s confused about where the camera is. He’s not even facing the audience.

HILARIOUS…
Joe Biden speaking in an arena in Iowa gets confused where the camera is and keeps talking to a screen. CSPAN keeps cutting away to try and help him out…hahahahahahaha
@realDonaldTrump @DonaldJTrumpJr

HILARIOUS…
Joe Biden speaking in an arena in Iowa gets confused where the camera is and keeps talking to a screen. CSPAN keeps cutting away to try and help him out…hahahahahahaha @realDonaldTrump @DonaldJTrumpJr pic.twitter.com/nF9pFV0TE1

Because Joe is a goofball. And even Democrats know it.

A pool report from a @JoeBiden fundraiser tonight in New York includes a quote where Biden refers to the G8, but it’s been the Group of 7 nations since Russia was kicked out in’14. He criticized Trump for his now cancelled plan to host at Trump Doral. pic.twitter.com/zlMYZu3DzM

.@JoeBiden called the G-7 Summit, the “G-8,” despite the fact that only 7 member nations were at the Summit.

And then claimed, “if I have any expertise, it’s in American foreign policy.”

His campaign is just becoming a parody at this point ⤵️pic.twitter.com/bPKhyUddZK

Biden calls the G-7 the “G-8.” Pretty soon he’ll be talking about World War VII and quoting “Malcolm the Tenth.” When my mom told me that in America “anyone can grow up and be president” I’m not sure this bumbling fool is what she had in mind

Trump made it clear on Twitter how upset he was with Dems and the mainstream media for causing yet another uproar. He also noted that this arrangement would have come at “ZERO COST to the USA.”

I thought I was doing something very good for our Country by using Trump National Doral, in Miami, for hosting the G-7 Leaders. It is big, grand, on hundreds of acres, next to MIAMI INTERNATIONAL AIRPORT, has tremendous ballrooms & meeting rooms, and each delegation would have…

…..its own 50 to 70 unit building. Would set up better than other alternatives. I announced that I would be willing to do it at NO PROFIT or, if legally permissible, at ZERO COST to the USA. But, as usual, the Hostile Media & their Democrat Partners went CRAZY!

….Therefore, based on both Media & Democrat Crazed and Irrational Hostility, we will no longer consider Trump National Doral, Miami, as the Host Site for the G-7 in 2020. We will begin the search for another site, including the possibility of Camp David, immediately. Thank you!

ICYMI: Dem Mayor Defies Stay-At-Home Order to Get Haircut Because She’s ‘Face of This City’