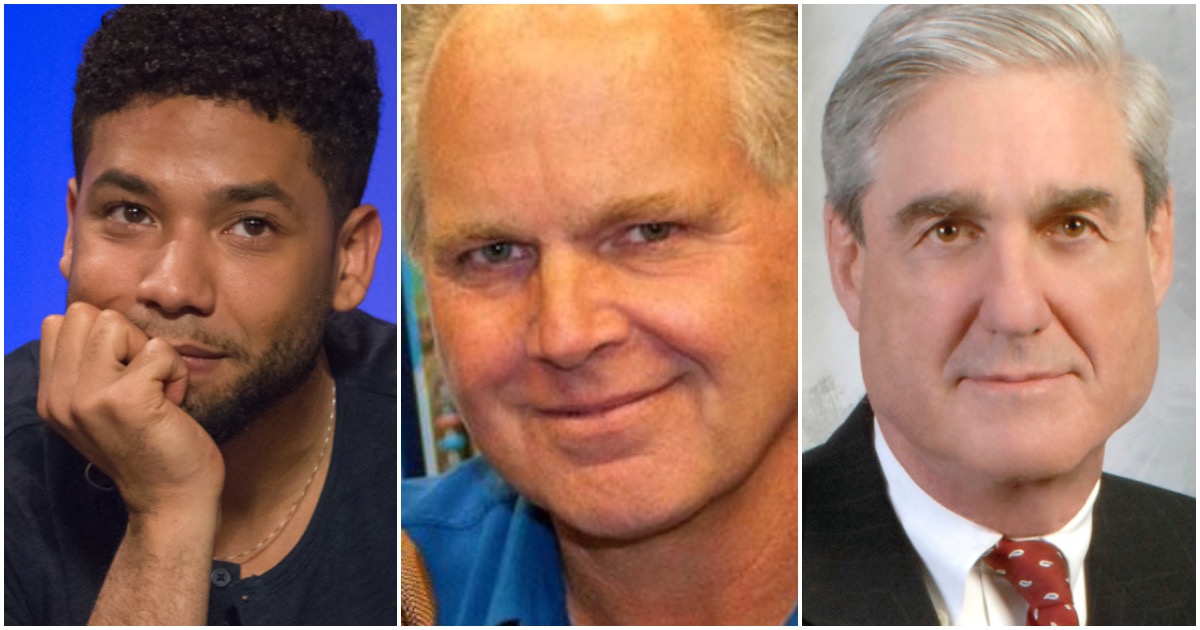 Whether it’s Michael Avenatti facing prison time, Special Counsel Robert Mueller clearing President Trump of any collusion with Russia, or Jussie Smollett getting off scot-free, America has had a busy week.

Radio legend Rush Limbaugh needs you to know something, though.

And that is, the Muller probe was far more of a “travesty of justice” than the Smollett hate crime hoax.

On his talk radio show Wednesday, Rush Limbaugh drew a connection between the two biggest stories of the week: the Cook County state’s attorney suddenly dropping all 16 felony charges against former “Empire” star Jussie Smollett for allegedly staging a hoax hate crime against himself and the final report by Robert Mueller that put a nail in the coffin of the Democrats’ and the Drive-By Media’s two-year “collusion” narrative. Both, he said, are a “travesty of justice” with political angles, but the latter is by far the most egregious.

Rush noted, “Now, folks, have you noticed all of the outrage over the dismissal of charges against Jussie Smollett? I mean, people are really, truly outraged over this — and I don’t blame ’em. This is a travesty of justice. It has not been explained. It’s been sealed, so nobody’s gonna ever really know what happened here. There’s no question that the Chicago PD is confident that they have the goods on the guy. They say they have even more evidence than they have revealed, and they were waiting to use it at trial.”

Limbaugh then noted that there’s a potential political angle to the story that traces back to the Obamas. “There are now stories about maybe the Obamas got involved,” he explained. “Tina Tchen, who is a former Michelle Obama chief of staff in the White House, is a friend with the prosecutor and a friend with the sister of Smollett.”

Rush added, “What in the world would be in it for them to be associated with this, which justifiably has people really mad about a travesty of justice? Now it’s been learned that … Jussie Smollett’s community service was doing 10 hours or 18, whatever it was, for the Reverend Jackson. That’s it! He even made a big deal about demanding his $10,000 back.”

The point is, said Limbaugh, that this is a clear “travesty of justice” that has justifiably outraged people, but as absurd as it is, it is only a shadow of the travesty that took place with the Russia investigation.

Limbaugh knows exactly how President Trump can win on the border wall. All he has to do is hang on.

Why? Because soon enough public opinion will sway in his favor.

Rush: “He’s got a good start. There’s all kinds of really good, long overdue things happening that we’ve wanted to happen. Like 95% of the EPA furloughed? A lot of nonessential government workers on furlough? This is exactly what we’ve wanted: The deemphasis of government, the shrinking of government, the illustration of the (pfft!) redundancy in the number of people and policies and so forth. The idea that people can function, that their lives can go on even in the midst of a partial government shutdown. If he can just hang on a few more weeks.“

ICYMI: Even Far-Left CNN Is Now Admitting That Evidence Against Comey Is Damning [Watch]