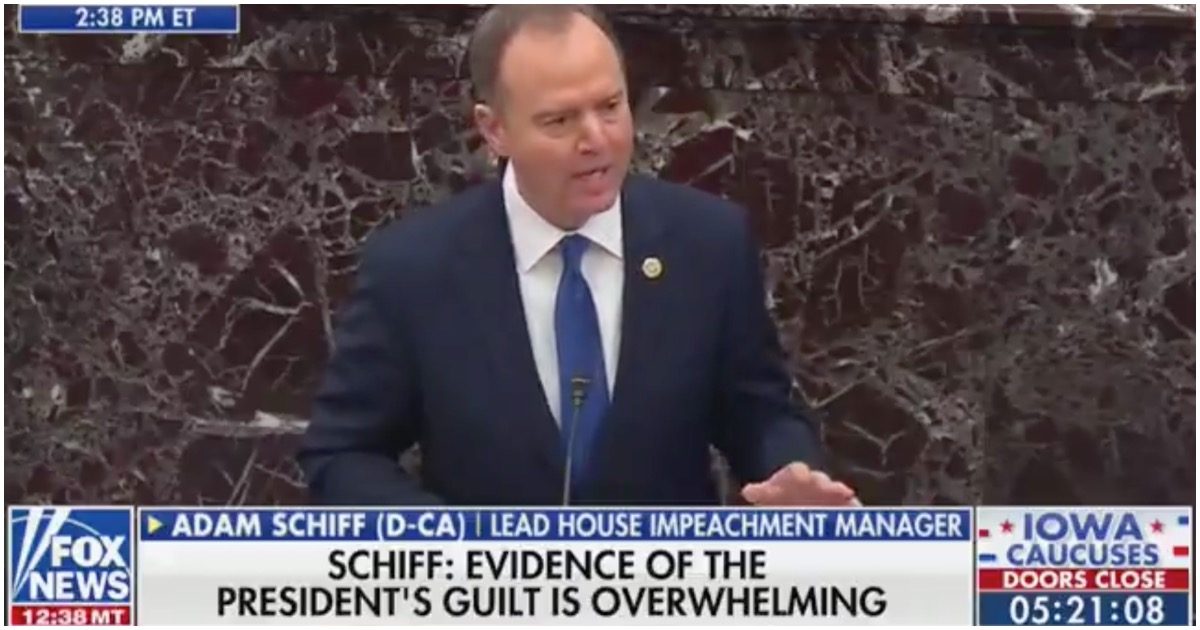 The day after the nation watched the Kansas City Chiefs defeat the San Francisco 49ers in Super Bowl 54, far-left Rep. Adam Schiff (CA) took to the Senate floor to say some pretty crazy stuff – even for him.

Trump might sell Alaska to Russia if they rig the election in his favor this November? Trump might reside at Mar-A-Lago and let his son-in-law, Jared Kushner, run the nation? What the heck is the guy talking about?

It looks like Schiff got caught lying – again. Go figure.

House Intelligence Chairman Adam Schiff appears to have mischaracterized a text message exchange between two players in the Ukraine saga, according to documents obtained by POLITICO — a possible error the GOP will likely criticize as another example of the Democrats’ rushed effort to impeach President Donald Trump.

The issue arose when Schiff (D-Calif.) sent a letter to House Judiciary Chairman Jerry Nadler (D-N.Y.) last week summarizing a trove of evidence from Lev Parnas, an indicted former associate of Trump’s personal attorney Rudy Giuliani. In one section of the letter, Schiff claims that Parnas “continued to try to arrange a meeting with President Zelensky,” citing a specific text message exchange where Parnas tells Giuliani: “trying to get us mr Z.” The remainder of the exchange — which was attached to Schiff’s letter — was redacted.

But an unredacted version of the exchange shows that several days later, Parnas sent Giuliani a word document that appears to show notes from an interview with Mykola Zlochevsky, the founder of Burisma, followed by a text message to Giuliani that states: “mr Z answers my brother.” That suggests Parnas was referring to Zlochevsky not Zelensky.

The word document contains a series of questions and answers, but doesn’t identify who is doing the asking or answering. Yet the questions center on the hiring practices at Burisma, while the responses include statements such as “we wanted to build Burisma as [an] international company” and “we also thought it would help in Ukraine to have strong international board figures,” which seems to point to Zlochevsky — not the Ukrainian president — as the respondent.

POTUS called out Schiff for being the lying [insert word here] that he is. And in typical Trump fashion, he spoke the truth and did so with confidence.