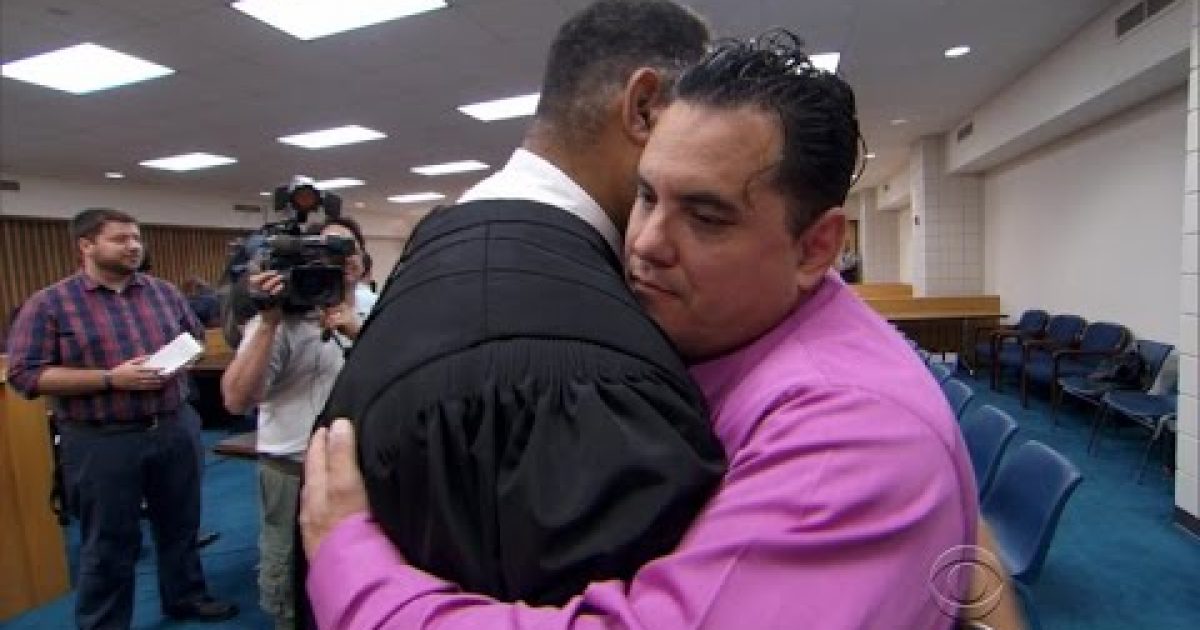 Sure, it’s great to be the one to hand down justice to an unrepentant criminal or someone who poses a serious danger to society. Still, judges have hearts like anyone else and there are just as many instances where a judge like Olivera is forced to sentence someone they truly wish they could help.

As a Gulf War veteran, Olivera is no stranger to the life-altering experience of combat. He’s seen plenty, placing him in a unique position to serve both his community and his fellow servicemen as a judge.

When Serna’s case came before him, Olivera was deeply moved.

Serna, a three-tour veteran of the war in Afghanistan and two-time Purple Heart recipient, is one of the innumerable veterans who find themselves suffering from PTSD and unable to cope back home.

For many veterans like Serna, alcohol or drugs seem to be waiting with open arms, offering false comfort and sending them on a downward spiral of self-destruction. The Veterans Treatment Court exists to serve veterans fighting this kind of battle, and it became Judge Olivera’s mission to make a difference in Serna’s life.

Serna was arrested for drunk driving a few years before this court date. One condition of his probation was that he was strictly prohibited from drinking alcohol. But when Serna lied about a recent urine test, Olivera couldn’t just let it slide.

“I gave Joe a night in jail because he had to be held accountable,” Olivera recounted to CBS.

Later on, when Serna entered his cell for the night, terrible memories came flooding back into his mind, memories of the event that sparked his PTSD.

“When I walked into the jail cell, and they closed the door behind me, I started feeling this anxiety,” Serna said. “It came back—a flashback.”

As an Army Sargent First Class, Serna survived an IED and a suicide bomber during his time in Afghanistan, but that wasn’t the event that shook him. Instead, it was a simple truck ride with three other men in his company that proved to be the most horrific event of his life.

“We were following the creek and the road gave way,” Serna recalled, tearfully, “And the vehicle went into the creek.”

As the water began rising in the truck, Serna found himself stuck and totally unable to move. The water rose up to his chin before finally subsiding and, tragically, he was the only one to leave that truck alive. Because of this incident, Serna not only suffers from PTSD, but extreme claustrophobia.

Within a few minutes of being locked up, Serna received the surprise of a lifetime when Judge Olivera walked through the door to join him for the night.

“We talked about our families,” Serna said, smiling. “The walls didn’t exist anymore. He brought me back to North Carolina from being in a truck in Afghanistan.”

“He is a judge, but that night, he was my battle buddy,” Serna said. “He knew what I was going through. As a warrior, he connected.”

And, just like that, Olivera, who saw his brother-in-arms struggling, lifted him up and carried him through the night, and hopefully sparked a change leading to a brighter future for Serna.

One Little Girl’s Birthday Almost Became A Tragic Disaster, Until This Officer Saved The Day

WATCH: A Group of Strangers Work Together to Save Puppies From Pet Store Inferno