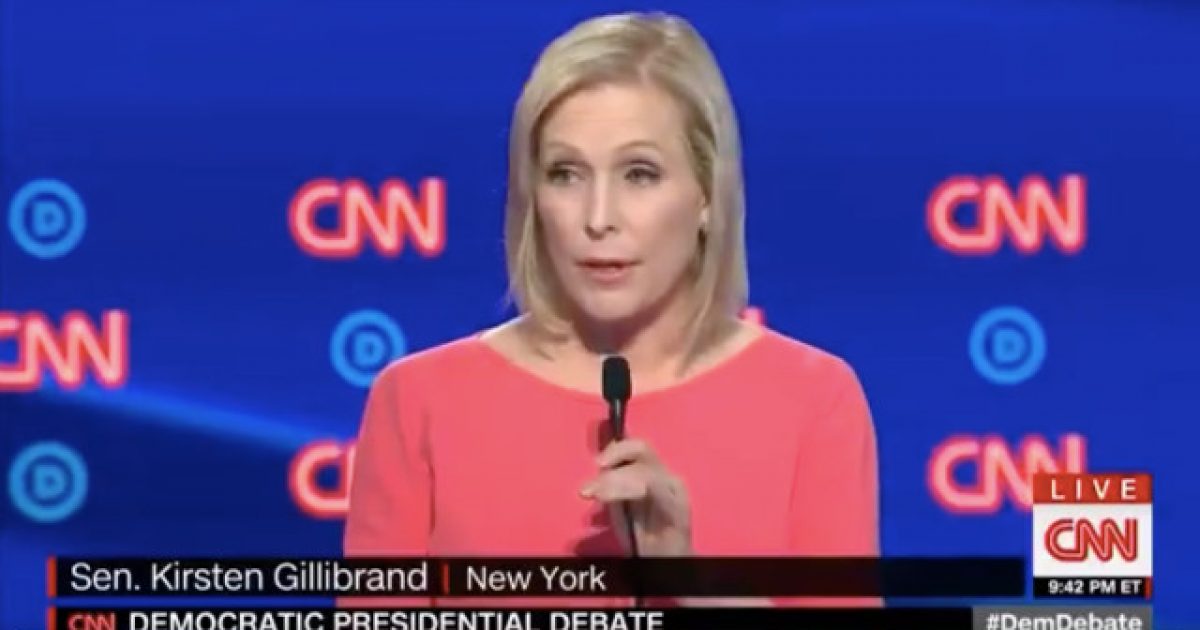 Presidential candidate, Sen. Kirsten Gillibrand decided that Wednesday night’s presidential debate would be a perfect night to try and show off her comedic chops by saying the first thing she would do if she became president would be to “Clorox the Oval Office.”

Isn’t she just a riot, folks?

Well, the joke was short-lived because the internet soon pulled the wind out of her sails by reminding her of her past.

Gillibrand’s laugh-line is rooted in the narrative that President Donald Trump is a sexual predator, which has been time and again echoed by elected Democrats. In December of 2017, for example, the New York senator called for Trump to resign from office due to accusations of sexual misconduct leveled against him. “President Trump has committed assault, according to these women, and those are very credible allegations of misconduct and criminal activity, and he should be fully investigated and he should resign,” she told CNN’s Christiane Amanpour.

However, Gillibrand has a history of aligning herself with men accused of sexual misconduct in effort to advance her career, deflating her “Clorox” rip against Trump.

The Daily Wire’s Ashe Schow, for instance, highlighted the politician’s ties to both former President Bill Clinton and Hollywood producer and Democrat mega-donor Harvey Weinstein; both of whom have been accused chronic sexual misconduct.

Kirsten Gillibrand: “The first thing I would do is Clorox the Oval Office.”

Gillibrand says she will Clorox the Oval Office. Where was she was Bill Clinton left office? Oh, using him and Hillary to fundraise and win elections.

Seems like strange company to keep if you’re going to be hammering on someone for sexual deviance and crimes, don’t you think?

How many times has Bill Clinton been accused of rape or sexual harassment? More times than you can count on your fingers and toes, that’s for sure.

Unlike Clinton, who also has connections to the NXIVM cult and Jeffrey Epstein, both of which are related to heinous sex crimes, Trump’s allegations have all been a complete wash.

The bottom line here is, if you’re going to make jokes about someone’s supposed sexual indiscretions, perhaps you ought to make sure your own associate list is squeaky clean.