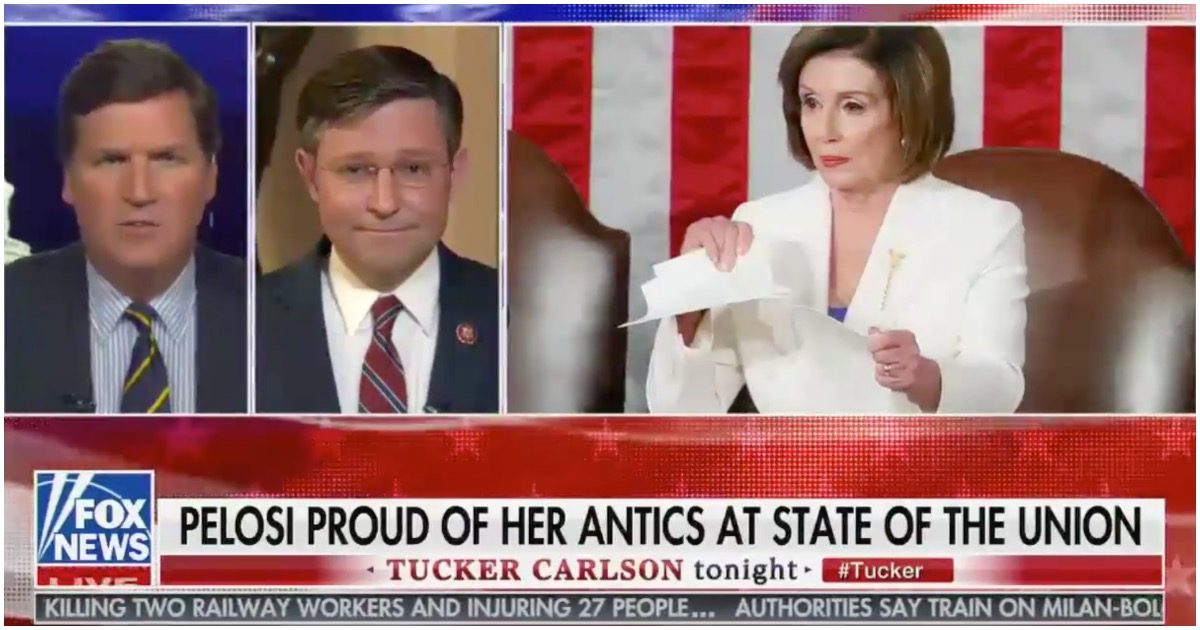 Not only was it petty and juvenile, but Speaker Nancy Pelosi (D-CA) apparently committed a felony when she ripped up President Trump’s State of the Union speech. Democrats won’t care, though. Most of them probably liked what Pelosi did.

Johnson said, “It was totally unprecedented. It was shameless and it was also unlawful, Tucker. A lot of people have been talking about this the last 48 hours and I did a little legal memo to point out to my colleagues that she actually committed a felony when she tore that paper up. It wasn’t just any copy of the State of the Union Address it was THE copy, the original. And we have over two centuries of custom and tradition. And, of course, the Constitution calls for the State of the Union Address. When the president delivers the copies to those top legal officers, those two top legislative officers in that co-equal branch of government, those are the official documents of the House. If you tear those up you violate a specific statute in the criminal code.”

Here’s Pelosi’s stunt, if you haven’t seen it…

Standing behind President Trump, Speaker Nancy Pelosi rips up what appears to be a copy of Trump's State of the Union speech at the close of the address. #SOTUhttps://t.co/VUOgoeHScApic.twitter.com/hSem11NtON

C-SPAN asked people to call in and give their opinions on the SOTU. What happened after that was brilliant. “I’m a Democrat, but I no longer will vote Democrat,” said one caller. “I think it’s outrageous that they sat there when all these good things are happening to our country and how much we love our country. And they looked like they hated our country…It’s outrageous and I will never vote Democrat again.” She went on to say that all her family voted for Hillary last time but this time they will never vote for a Democrat again.

WOW! After the State Of The Union DEMOCRAT callers into C-SPAN completely destroyed Pelosi, saying they will NEVER vote for the Democrat Party again!😮 @realDonaldTrump #sotu #StateOfTheUnion #NancyPelosi pic.twitter.com/mB3ExhXWdr

One of our last surviving Tuskegee Airmen.

The survival of a child born at 21 weeks.

The mourning families of Rocky Jones and Kayla Mueller.

A service member's reunion with his family.

Pelosi's act dishonored the institution and destroyed even the pretense of civility and decorum in the House. If this is the Speaker's "drop the mike" moment, it is a disgrace that should never be celebrated or repeated. In a single act, she obliterated decades of tradition.

Watch: Nancy Pelosi Accuses Trump of Being ‘Sedated’ During State of the Union Speech

Pelosi Makes It Clear: Dems Will Investigate Other Cases Against Trump With Eye On Impeachment