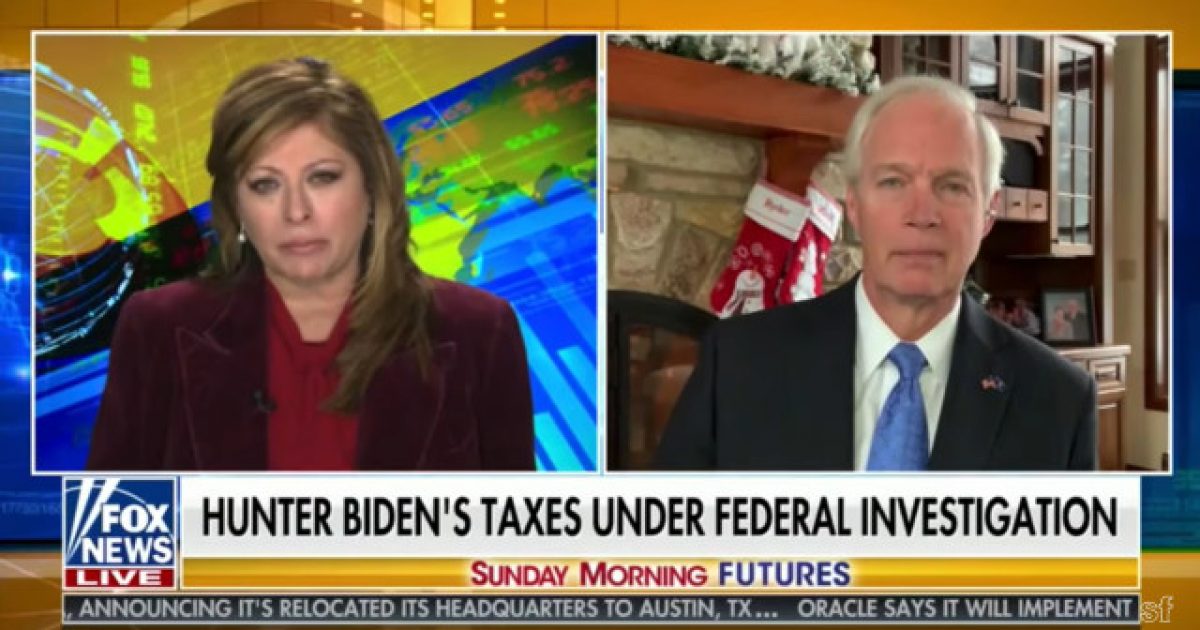 Over the weekend, Sen. Ron Johnson of Wisconsin had an interview with Maria Bartiromo of Fox News, where he claimed that the attorneys who are representing Hunter Biden are not cooperating with his current investigation into Biden’s business dealings.

Of course his attorneys aren’t playing ball. They all know that Hunter is guilty of corruption and using his father’s political clout to help cinch lucrative deals. Including ones that helped his dad, the current Democratic presidential nominee, get rich while abusing his power to facilitate the deals.

Johnson spoke of various people in his reply, including Devin Archer, a former business associate of Hunter Biden’s who served with him on the board of Burisma Holdings Ltd., Rob Walker and James Gilliar, who reportedly had a partial holding in a planned venture with Hunter and James Biden known as SinoHawk Holdings with the Chinese oil company CEFC China Energy Co., Gongwen Dong, an “emissary” for CEFC chairman Chairman Ye Jianming, and Ye Jianming himself.

Bartiromo started by asking, “You’ve been investigating this for over a year and I want to get your take on what we know here; you put a press statement out this week basically showing all of the requests that you have put out there for Hunter Biden and his associates. Have you gotten any response, and where are we on that investigation, sir?”

Johnson replied: “We’ve only got a response from Hunter and Devon’s attorney not to cooperate; nobody else has even responded to us. That contrasts, I think, sharply with, for example, President Trump’s children and his associates that voluntarily submitted to literally hundreds of hours of transcribed interviews, that turned over thousands of documents. Didn’t require subpoena, in most cases, so I don’t know why Hunter Biden and Devon Archer and their associates Rob Walker, James Gilliar, why are they basically hiding in the weeds?”

“Let me show a list of some of the deals that we’ve talked about in the past, and these deals include deals with China, and of course we’ve been talking all about how the Communist Chinese Party tries to bribe and blackmail people in the U.S. so that they can approve laws that are positive to China. Are you expecting a potential incoming administration that changes policy against China because of all of these deals that we hear about? We just saw the billion dollars that Hunter had taken from the Bank of China to try to come up with a hedge fund to invest in Chinese companies, Senator,” Bartiromo said.

“Let’s face it: Vice President Biden has not been honest with the American public. He had to know about Hunter Biden’s business financial foreign entanglements and particularly China; he shook hands with Jonathan Li, one of his business partners. Now we’ve found out that Hunter Biden wrote an email to his landlord asking for keys for Joe Biden, James Biden, Gongwen Dong? The signage was supposed to reflect Hudson West, which was the CEFC USA subsidiary. Now CEFC, that’s that Chinese company; it was taken over by the state in 2018; its chairman just “disappeared,” Ye Jianming; this is an individual that had ties to the Communist Party of China as well as the People’s Liberation Army,” Johnson responded.

“These are the people, this is the business, that the Bidens were fully in bed with; again, setting up an office with, to have the emissary, Gongwen Dong, get a key to that same office. So we are finding more and more of how involved not only Hunter Biden was, but also James as well as Joe Biden, and he has not been truthful with the American public, and it’s about time that the press started asking questions. As I said before this election, this is not going away. This is a big mess; it’s going to be a bigger mess if it becomes a Biden presidency, and that looks like the way we’re headed,” the Senator finished.

It should be clear by now that the mainstream media interfered in the presidential election this year by opting not to report on the Hunter Biden story, preventing people from learning that one of the major candidates running for the White House, may have abused his authority and power when serving in the Obama administration as vice president.

That’s serious business. If true, and it seems the evidence points in that direction, Joe Biden should be in jail, not the Oval Office.