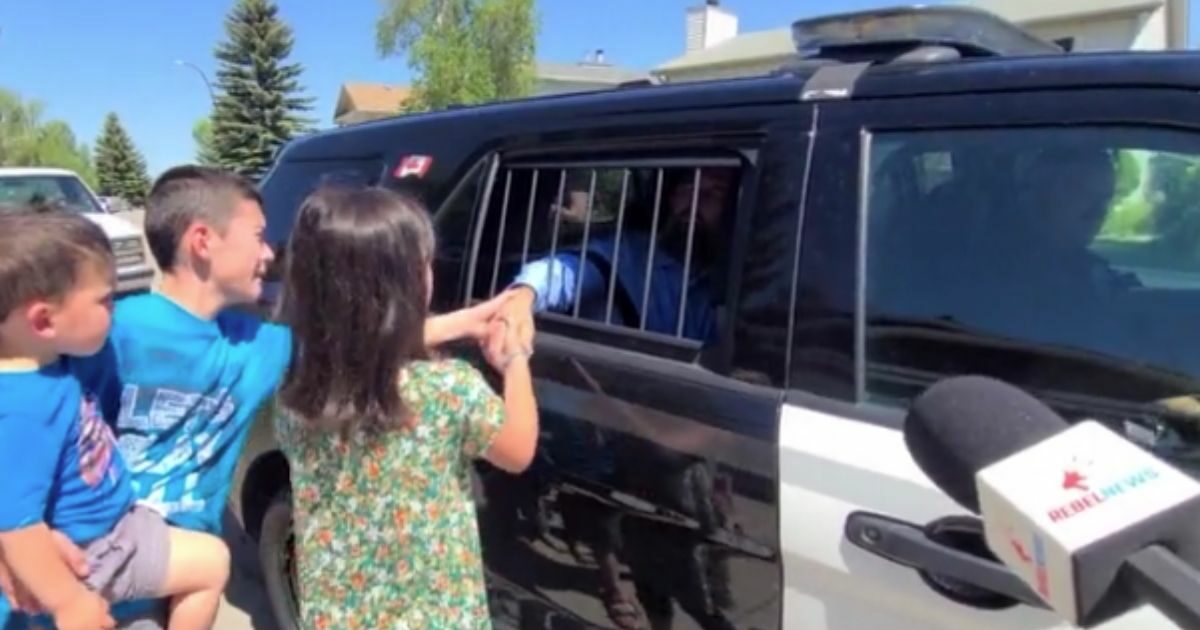 The moment that local governments in the Western world began to issue guidance or full-on mandates for religious gatherings in the early days of the pandemic, many were concerned that society had stepped onto a slippery slope.

Fast-forward 15 months later, and we’re seeing pastors arrested in front of their children after their “underground” church services were discovered by a police helicopter.

This is the stuff of tyranny and totalitarianism, not Western-style democracy. Yet here we are.

This week, Pastor Tim Stephens of Fairview Baptist Church was arrested outside his home as his distressed children cried, all for holding a church service discovered the day before by a police helicopter.

.@ATSoos and @KianSimone44 were on scene as police in Calgary, Alberta arrested Pastor Tim Stephens of Fairview Baptist Church for a second time on new charges stemming from his hosting of ‘underground’ church services the past two weekends.

The conservative Canadian website Rebel News reported that it is unclear if the helicopters were searching for unauthorized church services or just happened to notice the gathering. The outlet said that while police vehicles were later seen circling the service, which included group worship and a sermon from Pastor Stephens, they did not move in and attempt to stop the gathering.

The minister was arrested the following day for violating a court order that restricted him from holding services. Rebel News notes that the weekend prior, the church was effectively seized by Alberta Health Services for failing to adhere to local regulations regarding attendance, social distancing, and masks.

Stephens is being represented by the Justice Centre for Constitutional Freedoms.

Jay Cameron, a lawyer for the firm, blamed Jason Kenney, premier of the Canadian province of Alberta, for the arrest, according to the Calgary Herald.

“It appears that Premier Kenney’s government is targeting its enemies, those who are speaking out against lockdown restrictions and for Charter freedoms,” Cameron said, according to the newspaper.

Stephens has had several run-ins with the law for holding services in violation of local COVID-19 restrictions (as have other Canadian pastors). After Stephens was arrested in May, Alberta Health Services was forced to drop the charges after discovering the health order he had been accused of violating had been served to someone else by mistake, The Calgary Herald noted.

Now, he is being held in prison until June 28 for refusing to agree to bail conditions that would have hindered his ability to hold services.

Rebel News noted that despite efforts on the part of local authorities to prevent Stephens’ flock from gathering, services have only grown larger.

And now we can only assume that, as this man’s commitment to the Gospel of Christ is so emboldened by persecution, the men he is now locked up alongside will be hearing it, too!

That said, it is all the more chilling that we’re reading about a Canadian pastor who has not only been forced to conduct underground church services, but was arrested and put in prison after a police helicopter located the illicit gatherings.

“I just got a tip that the police may be on their way to arrest me,” Stephens tweeted Monday before police arrived at his house. “Why? I continue to lead our church to worship Jesus as Lord over every earthly power.”

I just got a tip that the police may be on their way to arrest me. Why? I continue to lead our church to worship Jesus as Lord over every earthly power.

This incident is close to home for us Americans, yet it sounds more like something that would happen in China or North Korea.

Our respective nations have long professed a commitment to defending God-given rights to gather and worship, yet after a century of diminishing respect for this deity who gives us these rights, we see an undeniable diminished respect for the rights themselves.

Tim was arrested again for holding an outdoor service in violation of Alberta’s health orders. He went before a Justice of the Peace this evening and refused the bail condition so he’ll remain in custody until his next court date June 28.@tim__stephens https://t.co/MDAuLCfeng pic.twitter.com/UCtPRjNohq

The damage this cultural trend has done to our governments’ commitment to defending these freedoms may have reared its ugly head amid the pandemic, but this has been in the making for a long time.

Let this be a very, very stern warning to us. It’s not as though we’ve been gathering and worshipping freely as our Canadian brothers and sisters live in fear — our churches have been targeted by earthly authorities who prioritize the mitigation of a virus over the inherent rights of Christians to worship.

The most disturbing behavior we saw from leaders here at home was the arbitrarily discriminatory restrictions on religious gatherings even as big box stores and abortion clinics enjoyed more freedom to conduct regular operations.

Again, this highlights how little our leaders regard both our God-given rights and our God himself.

They will answer to Him one day for what they have done — and we will also answer for our commitment to obeying His laws over man’s.

We have a duty to ensure that our First Amendment is protected, because the threats against it are no longer hypothetical. They’re very real, they’re here right now, and the more we get used to it, the sooner we can kiss them goodbye for good.