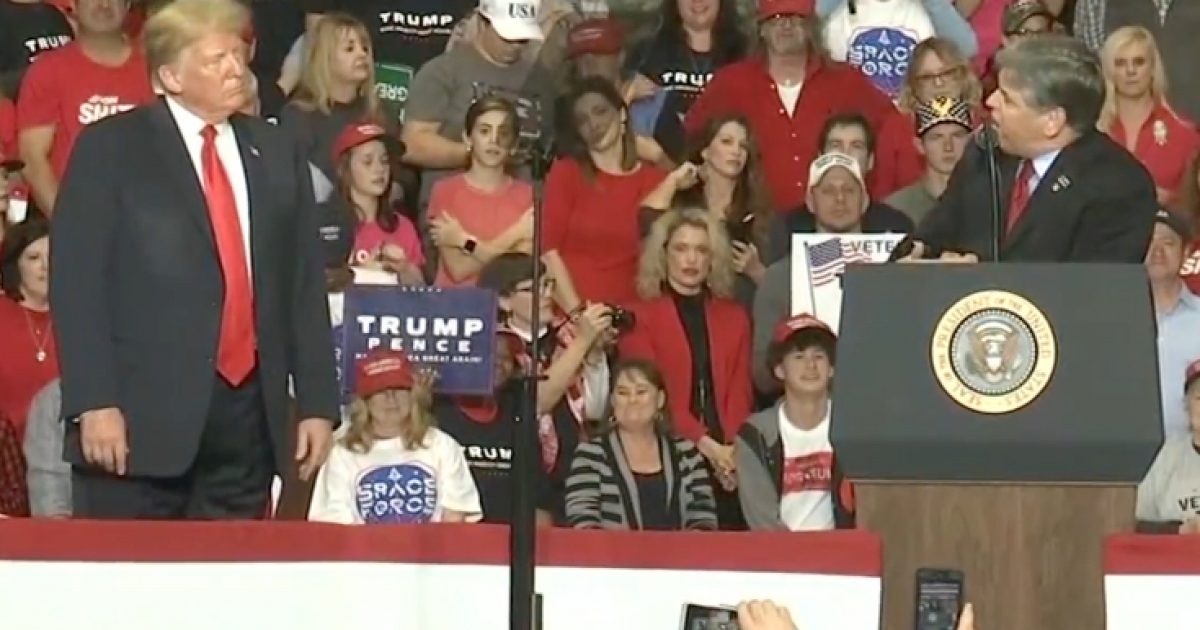 Last night was the final engagement for President Trump’s run of “Make America Great Again” rallies in the lead-up to the 2018 midterm elections.

Hailed as “the most important election of our lifetimes”, (a generic and overused line if there ever was one), 2018’s contest will likely be seen as a referendum on Donald Trump’s time in the White House, as well as a barometer for the democratic party’s re-admittance back into the mainstream of society as a whole.  Currently, the left is engaged in an ugly radicalization that has brought their fringes to the center in order to wreak havoc under the banner of “resistance”.  Mobs, not jobs, as the President is suddenly fond of saying.

With the latest rally being his most ambitious to date, Trump brought a cavalcade of special guests out on the road with him including longtime confidante and campaign manager Kellyanne Conway and White House Press Secretary Sarah Huckabee Sanders.

The appearance of Fox News host Sean Hannity, however, has many from Hannity’s own network more than mildly annoyed.

“People throughout the company think a new line was crossed,” one senior Fox News employee told CNN Business on Tuesday.

“It disturbs me to my core,” said another senior Fox News employee, who added, “I am so f—ing mad.”

“We were all told that Hannity was going to interview the president, but no one that I spoke with expected what happened last night,” added a third senior Fox News employee. “I’m aghast as are a number of other people.”

The Trump campaign had promoted Hannity over the weekend as a “special guest” at Trump’s final rally before Tuesday’s midterm election. But a Fox News spokesperson told CNN Business and other news outlets soon after that Hannity would simply be at the rally in Missouri to broadcast his show and cover the event for the network. Hannity offered an identical message in a Monday morning tweet, saying, “To be clear, I will not be on stage campaigning with the president.”

Yet just hours later, Hannity and Pirro were both on stage with Trump, energizing the Republican base ahead of Election Day.

Fox News released a statement calling the issue a “distraction” and admitting that it had been addressed internally.