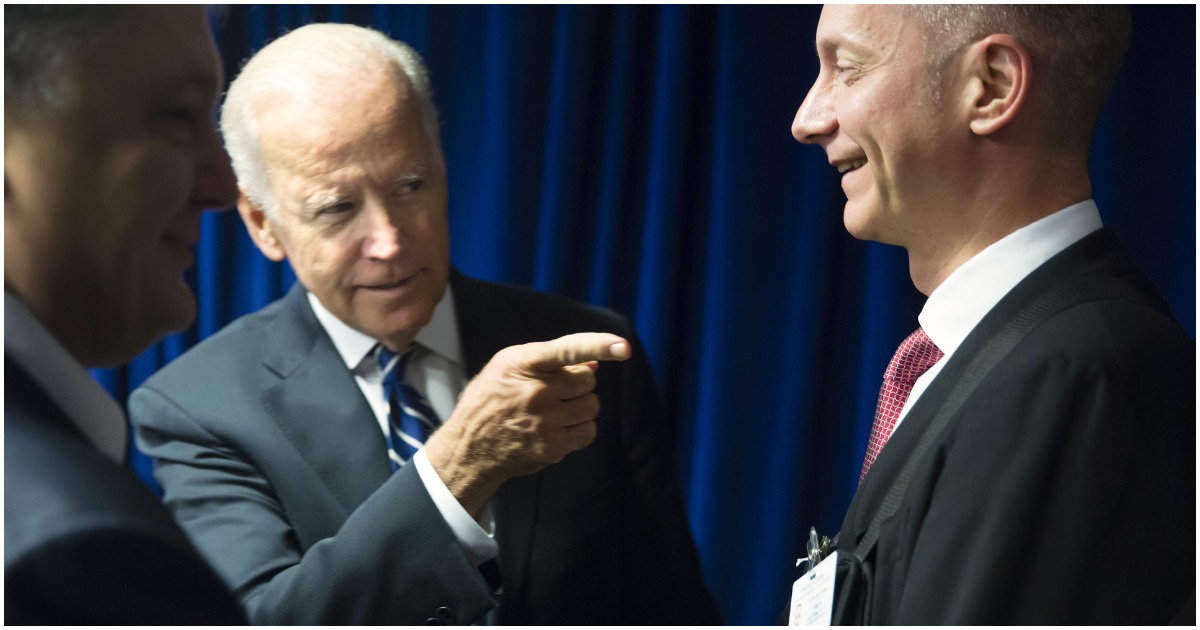 Former Vice President Joe Biden, you’d have to imagine, is one of those Democrats who “believes all women” regardless of the evidence.

For example, Joe was probably in Christine Blasey Ford’s corner over Brett Kavanaugh from the jump.

Now that Joe is being accused of sexual harassment, though, he’s saying his accuser is a liar.

Welcome to the Democrat Party!

Former Nevada Democrat state Sen. Lucy Flores accused former Vice President Joe Biden of sexual misconduct in a piece she wrote about a 2014 encounter she had with him that left her “mortified,” saying she had “never experienced anything so blatantly inappropriate and unnerving before.”

Flores noted, “Just before the speeches, we were ushered to the side of the stage where we were lined up by order of introduction. As I was taking deep breaths and preparing myself to make my case to the crowd, I felt two hands on my shoulders. I froze. ‘Why is the vice-president of the United States touching me?’“

This was an incredibly difficult thing to do, but something that felt necessary. It took awhile before I found the words and the support that made me feel like this was finally a story I could tell. https://t.co/Sr5Go3xuTe

Now, check this out…

New: Henry Munoz, the Co-Founder of Latino Victory Project, who organized the event with Lucy Flores and Joe Biden, questions Flores’ account, says he believes the two were never alone together. pic.twitter.com/vGa4nyyk2t

Statement from @JoeBiden this morning. pic.twitter.com/EbCchX2npU

Why this doesn’t make sense, per Yashar Ali:

This is absurd. In this statement Henry Munoz says that Flores and Biden were never alone. He says it twice…as if to prove the incident couldn’t have happened because they were never alone.

This is absurd. In this statement Henry Munoz says that Flores and Biden were never alone. He says it twice…as if to prove the incident couldn't have happened because they were never alone.

How is there even any doubt that it happened when *this* is one of the images from the event? If this happened on stage, to Eva, then crazy thought, but @LucyFlores is telling the truth. pic.twitter.com/Q6GiMdmznA

Lucy Flores: "The reason we're having these conversations about Vice President Joe Biden is because he's considering running for President." https://t.co/BYmDPeMsSi pic.twitter.com/4cuA6o6opi

After hearing President Trump’s rousing CPAC speech, a woman who works for the Biden Institute in Delaware said a remark made by POTUS reminded her of something Adolf Hitler might say.

Go figure. Democrats routinely compare 45 to the leader of the Third Reich.

However, what’s funny is that Biden, himself, said the same thing Trump said just a few years back.

Trump, according to a short excerpt on Mediaite, talked about “reclaiming our nation’s priceless heritage,” during his CPAC speech. It ordinarily wouldn’t be questioned or even noticed in a speech like Trump’s:

But these are not ordinary times. Samantha Vinograd, who is listed as a senior adviser at the Biden Institute at the University of Delaware (named after former Vice President Joe Biden), took to CNN to claim that Trump’s “heritage” line was insulting.

Vinograd, whose father is a survivor of the Holocaust, noted, “His statement makes me sick, on a personal level, preserving your heritage, reclaiming our heritage, that sounds a lot like a certain leader that killed members of my family and about six million other Jews in the 1940s.”

But if “reclaiming our … heritage” is problematic and reminiscent of Hitler, then Vinograd should also be upset with someone else: Joe Biden.

In 2011, while speaking at the Florida Democratic Party Convention, Biden said, “It’s time to fight back. It’s time to reclaim our heritage!” The former vice president made these remarks while stumping for then-President Barack Obama’s re-election campaign.

Joe Biden in 2011: "It's time to fight back! It's time to reclaim our heritage!" pic.twitter.com/MKn3HHPrL1

REPORT: Trump Is ‘Saving’ This Female Conservative for RBG’s Spot On Supreme Court