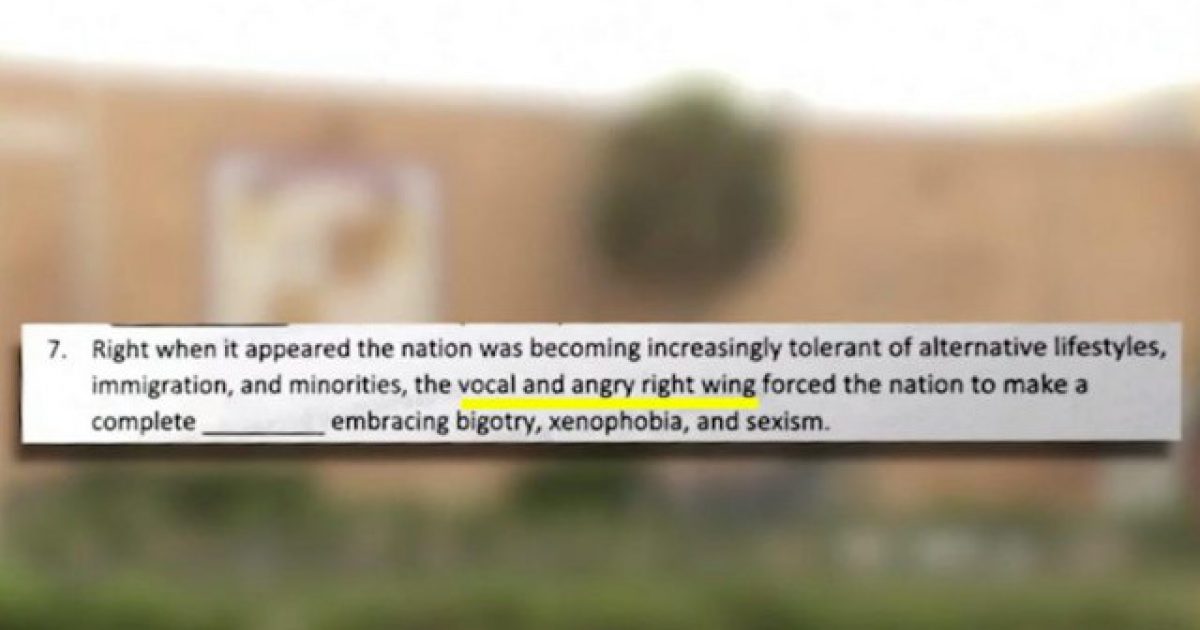 Parents of students at St. Augustine High School in Florida are furious after it was brought to their attention that a vocabulary quiz for their children contained a question that bashed conservatives.

Student Logan Parham was so stunned by what he saw on the quiz, handed out during his advanced English class, that he snapped a picture of it with his phone.

The seventh fill-in-the-blank statement stood out in particular: “Right when it appeared the nation was becoming increasingly tolerant of alternative lifestyles, immigration, and minorities, the vocal and angry right wing forced the nation to make a complete ________, embracing bigotry, xenophobia, and sexism.”

His mother Reanna agreed, telling the station she “had to read it twice. I was really surprised. Shocked.”

“It leads people to believe that anyone who leans toward the right — they’re a sexist or racist or a bigot,” she added to WKMG. “That happens a lot of times. We hear those kinds of things. We are not, and this doesn’t help.”

Osbert Cato, who has a ninth-grade daughter at the school, took a look at the quiz and added to WJAX that he also found the question disturbing.

“These are really trying times, and I think that as a community, people need to get together and talk things out,” Cato added to the station.

Here’s how the school district responded to all of the controversy:

The SJC School District sent this letter *exclusively to @ActionNewsJax –It was sent by the St. Augustine HS principal, to the teacher involved. It reminds the teacher about following the Principles of Professional Conduct & exercising good judgement. pic.twitter.com/tirJRSr5eJ

The school district has clarified that the controversial question will not be used on any further tests or quizzes going forward.

It’s scary to see the hive mind mentality of the left being forced on children in school, especially since these teachers know full well that they are undermining many parents’ value systems that they are trying to pass on to their children.

Public schools are no longer about equipping young people with the tools to be successful in life. If that was ever the intent, which is something that’s highly questionable. Instead, they, along with major universities, have been transformed into indoctrination centers used to churn out future generations of leftists.

Just one more reason to be cautious about where you send your kids to be educated.