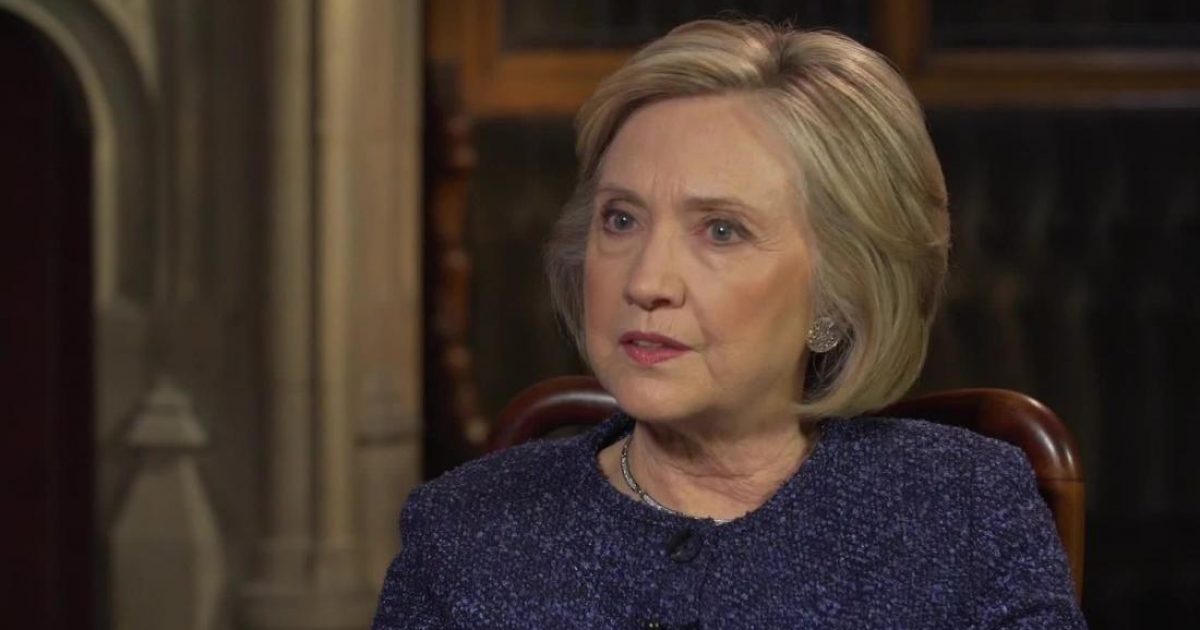 Hillary Clinton is a stunning woman.

She’s often praised for her courage, and she certainly is a courageous woman. She’s also utterly shameless. This is one reason she’s somehow managed to be so successful in politics despite leaving a trail of scandal and corruption in her wake.

She is willing to do whatever it takes to win, and she’s able to craft all the blatant failures of herself and her husband into some kind of self-pitying sob story of their resilience in the face of persecution.

So when it comes to the many allegations of sexual misconduct made against her husband, Bill, she has somehow managed to not even flinch as she claims to “believe all women” despite having brutally slandered the women who accused her husband.

In a recent interview with CNN, she declared that, when it comes to Trump’s infamous Access Hollywood tape vs. the various and sundry allegations made against her husband, Bill is clearly a victim because his accusers came forward as part of a “right-wing conspiracy”. Trump hasn’t been subject to this yet so clearly he’s guilty as sin.

Or something along these lines.

“There’s a very significant difference, and that is the intense, long-lasting, partisan investigation that was conducted in the ’90s,” Clinton said.

“If the Republicans, starting with President Trump on down, want a comparison, they should welcome such an investigation themselves,” she said.

She also praised her husband’s resilience.

“Bill had to be incredibly strong,” Hillary said. “First to get elected, then to get re-elected, and to survive.

“And it was not easy, by any means, obviously. But he really believes that Democrats had to be tougher and stand up to the bullying and the intimidation.”

Clinton doesn’t just play the world’s tiniest violin for herself, her husband and their collective legacy; she has a collection of microscopic Stradivariuses perfectly tuned for each possible occasion — and when it arises, she produces that precise instrument and Itzhak Perlmans that bad boy until even I almost feel sorry for her.

to her credit, [interviewer] Amanpour wasn’t bowled over by Clinton’s playing or that she glossed over why he had “to survive” an impeachment attempt and numerous accusations of sexual misconduct. That’s what prompted the question that led to Clinton saying the “intense, long-lasting, partisan investigation” against her husband that Trump apparently hasn’t endured.

Right. Trump has no idea what it’s like to be the target of a long-lasting partisan investigation.

Neither does Kavanaugh, apparently, who is likely to go down in history as a textbook example of the victim of a partisan character assassination after the attack he just endured.

Of course, that’s not the way Hillary sees it:

Clinton said her husband was “standing up to bullying and intimidation” when he fought allegations by Broaddrick, Paula Jones and Kathleen Willey. And she said this just days after she declaimed Kavanaugh “deserved laughter” for even intimating the accusations against him might have been out of vengeance.

The double-standard and shamelessness are insane. I don’t think Clinton is unaware of how preposterous this argument is. I think she’s just aware that if you dig your heels in and refuse to ever admit fault, eventually the other side will blink.

You’ve got to hand it to her. She literally never backs down.

VIDEO: ‘Morning Joe’ Drops Truth Bomb on Democrats for Treatment of Kavanaugh. Here’s What They Said.