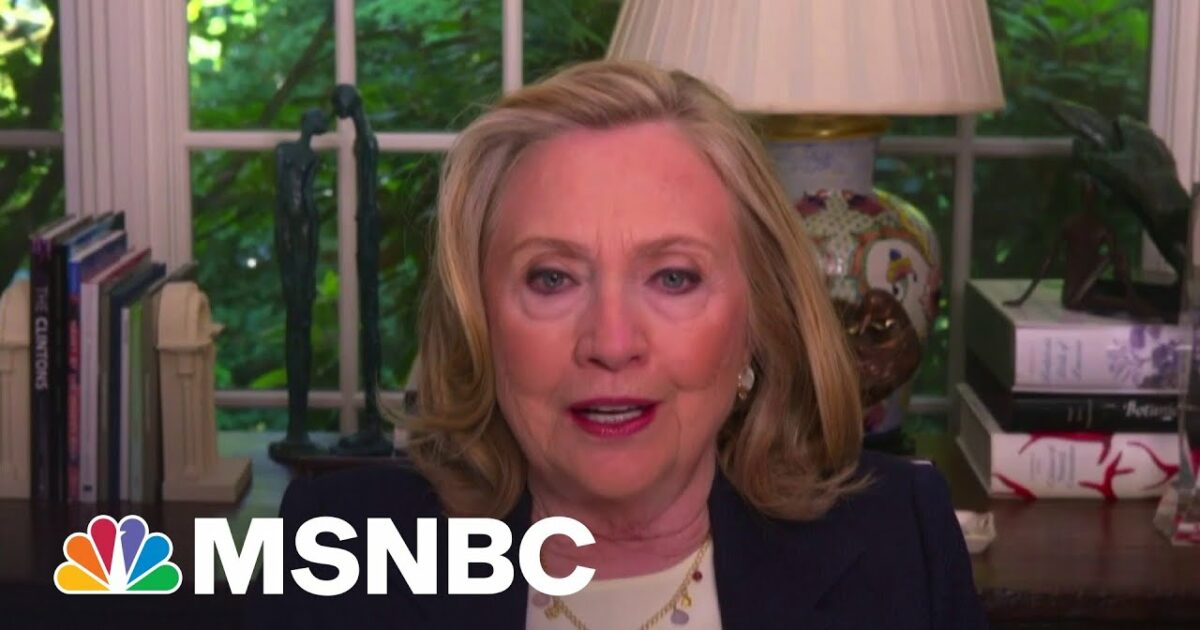 Failed former Democratic presidential candidate Hillary Clinton said on Wednesday that Russian President Vladimir Putin helped to rig the 2016 election against her — and then claimed that people who dispute the 2020 election results are working on behalf of Russia.

“Putin is the great disrupter. He has a clear mission to undermine democracies, first and foremost, the United States,” she told MSNBC’s “Morning Joe” on Wednesday morning in a lashing of former President Donald Trump and his supporters.

“We don’t have, you know, Trump being in effect a spokesperson for Putin any longer,” Clinton said. “We have a president who will stand up and defend American interests.”

She also claimed that the 2016 election was not fair and that she lost because of Russian intervention, asserting that Putin “helped elect Trump.”

Clinton then immediately claimed that people who dispute the results of this last election are working for the Kremlin, either directly or indirectly.

“And sadly, what we’ve seen over the last four years, and particularly since our election in 2020, is that we have people within our own country who are doing Putin’s work.

“Now, whether they are, as we say, witting or unwitting, they are doing his work to sow distrust, to sow divisiveness, to give aid and comfort to those within our country who, for whatever reason, are being not only disruptive but very dangerous.

“So, I think President Biden knows he has got to work on both fronts. We have problems here at home. … We’re letting partisanship, frankly, interfere with patriotism. And we’ve got to lay down some markers for Putin and then follow up with them.”

Clinton also accused Trump of emboldening and “elevating” Putin over his refusal to strike an adversarial tone with him from day one of his administration during the MSNBC spot.

“We can’t turn the clock back. … We not only lost four years, we emboldened Putin,” she said. “We gave him a green light. I never thought I would see some of what we saw during the four years of the Trump administration.”

Interestingly, Clinton’s tone from Wednesday is undercut by some of the facts.

For example, the former first lady’s portrayal of a Democratic White House taking a hardline stance against Russia prior to Trump’s election does not match the facts.

In 2012, then-President Barack Obama, during a presidential debate, slammed GOP nominee Mitt Romney for describing Russia as a chief threat to the U.S. and its interests abroad.

“Gov. Romney, I’m glad you recognize al-Qaida is a threat, because a few months ago when you were asked what’s the biggest geopolitical group facing America, you said Russia, not al-Qaida,” Obama said in a memorable moment. “You said Russia. And the 1980s are now calling to ask for their foreign policy back.

Clinton at the time was Obama’s secretary of state.

Democrats, including Clinton, did not start pushing a narrative that Russia was the chief threat to the American public and democratic process until they falsely accused Trump of being connected to dark Russian operatives prior to the 2016 election — which Clinton lost in an election she now disputes.

Now that Democrats have found themselves the benefactors of what many conservatives view as a stolen election, Clinton and other high-profile Democrats are connecting a distrust in the electoral process to work on behalf of a foreign adversary.