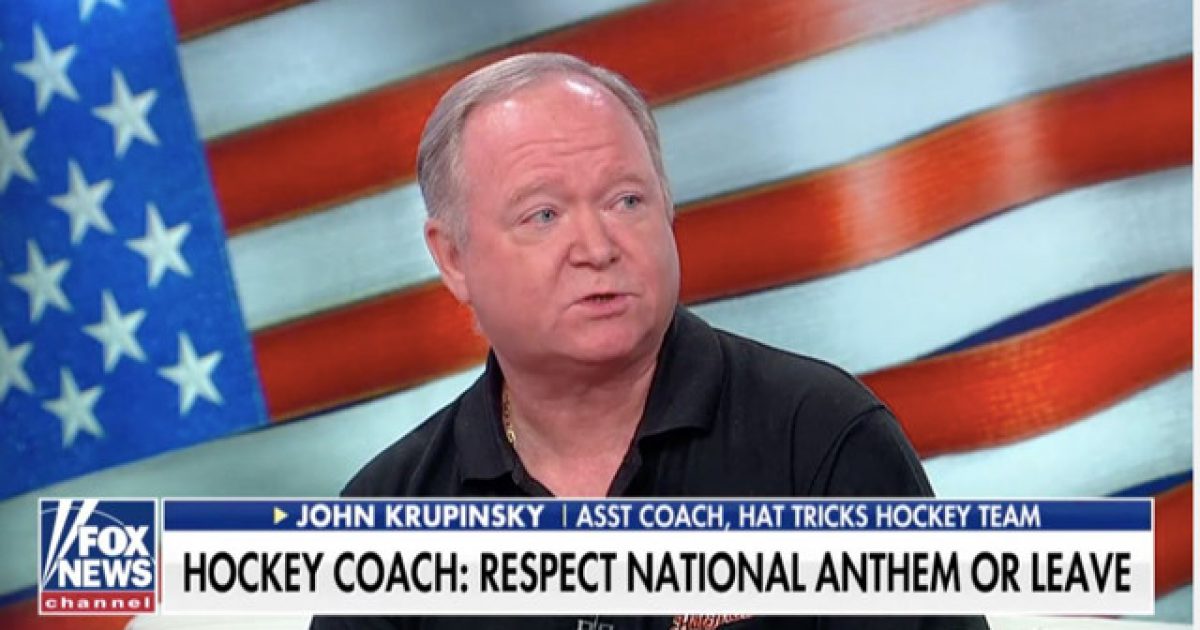 John Krupinsky, a hockey coach who recently went viral after he demanded his players respect the National Anthem, isn’t backing down from his remarks, stating the reason he’s passionate about this issue is that he’s seen too much death and disrespect.

In the video in question, Krupinsky — who also serves as a police sergeant, says, “If there’s anybody here who is going to be disrespectful to either the American or the Canadian national anthem, grab your gear and get the f*** out now because you’ll never see the ice in this arena. We don’t have that problem in hockey. We’re better than that, but there was no sense in wasting anybody’s time if that s*** was going to happen.”

The assistant coach for the Danbury Hat Tricks of the Federal Hockey League discussed the video on “Fox & Friends.”

“I take pride in my country,” Krupinksy said. “I’ve unfortunately seen it cover too many coffins. I think we can take a timeout to give two minutes’ worth of respect to our soldiers, to our firemen, to your policemen. I don’t think that’s asking too much. I’m not going to apologize for asking players to show a little bit of respect when it’s either the American or Canadian national anthem.”

He added, “Some people said, ‘Oh you wouldn’t let your players protest.’ I wanna be clear: My players would be free to protest on their day off. If they had something they wanted to do.”

When the national anthem is playing, however, it’s an entirely different story.

“I don’t think it’s too much to ask your employees to show some respect for the flag and for the country,” he reasoned.

The world of sports absolutely needs more men like Krupinsky to help balance out all the wannabe Kaepernicks out there who are using their platforms to destroy their country and bash the men and women have died to protect their way of life.

Hopefully, his players will grow to appreciate his stance and passion on the issue and respect his words without giving pushback.

BUSTED: Dems Use Photo From Obama-Era to Slam Trump for ‘Inhumane’ Border Treatment