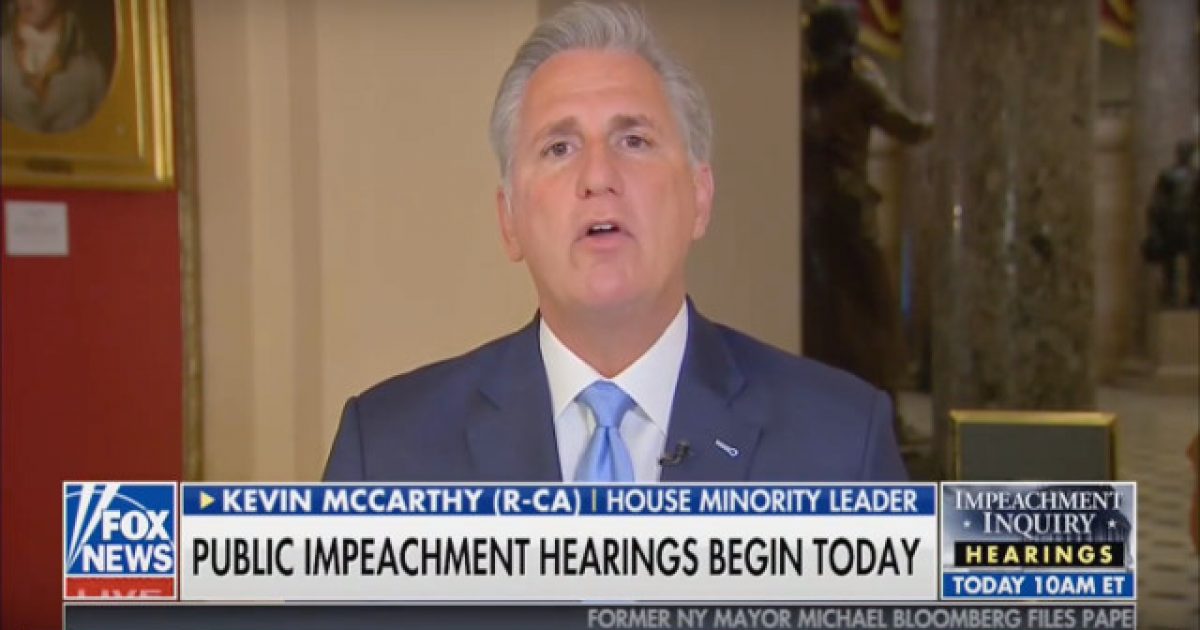 House Minority Leader Kevin McCarthy recently delivered a sharp statement about the motivations behind the current impeachment fever that has swept through the Democratic Party in Congress, stating the left is framing Trump because they’re scared of the potential outcome of the 2020 election.

Here’s more of what McCarthy said via The Washington Examiner:

“We’ve never had an impeachment in the first term,” McCarthy said on Fox News hours before the first public impeachment proceedings began in the House. “They are so afraid to face the president in the election; they’re trying to frame him.”

McCarthy has been one of Trump’s strongest supporters on Capitol Hill since Democrats announced a formal impeachment investigation into the president’s conduct. Democrats have seized on a July 25 phone call between Trump and the president of Ukraine after a whistleblower alleged the president abused his power in asking the foreign leader to investigate Joe Biden.

“There’s no due process, the president’s attorney is not in the room, cannot cross-examine, we cannot have our witnesses,” McCarthy complained. “We can’t have a whistleblower who this all started from, an individual who was not even on the phone call.”

Over the last several weeks, the GOP has placed most of their focus on discrediting the whistleblower who made the initial complaint against the president and have requested that the individual be named and forced to testify in the public hearings.

Republicans have repeatedly accused Democrats of running a “sham” impeachment with the goal of undoing the 2016 election. Democratic leadership has responded to the calls for the whistleblower to be named by stating that doing so would put his life in danger and would discourage future whistleblowers from coming forward in the future.

Ginsburg died peacefully, unlike the tens of millions of babies whose violent murder she advocated
September 23rd, 2020 DC Clothesline