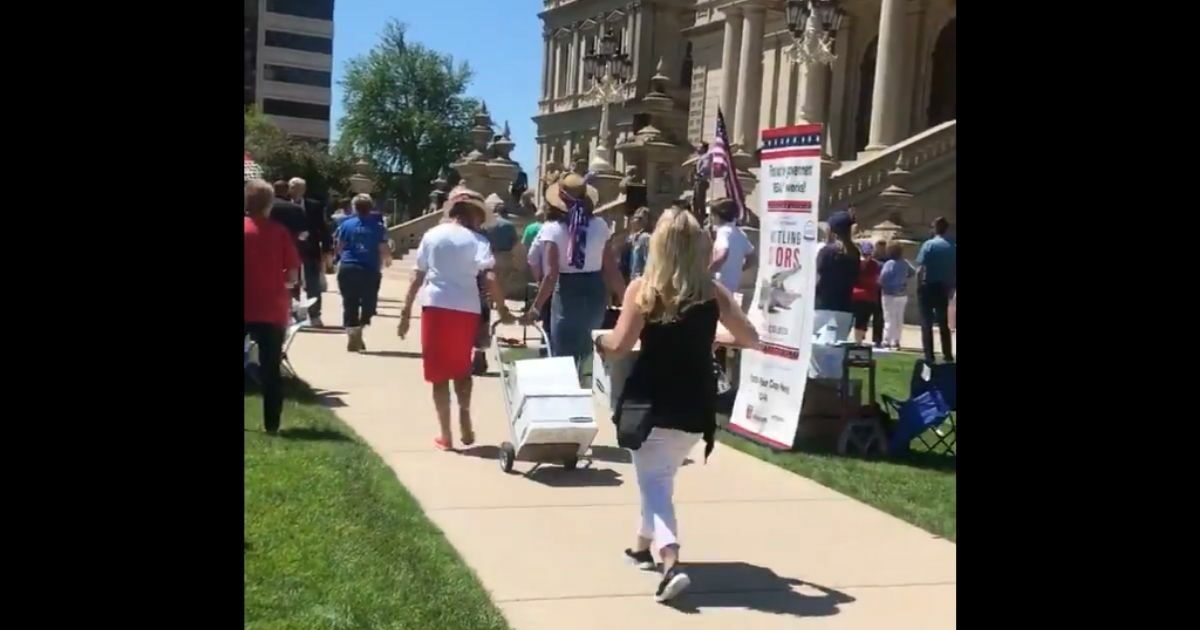 It looks like calls for investigating the 2020 election won’t end anytime soon.

For the state of Michigan, things are starting to get interesting.

On Thursday, residents championed election integrity efforts by delivering more than 7,000 signed affidavits alleging voter fraud to state officials and demanding a forensic audit of the 2020 presidential election, according to reports.

JustTheNews reported that hundreds of people gathered outside the Capitol in Lansing for the event.

Women, some sporting patriotic garb, could be seen transporting the documents in a video tweeted Thursday.

According to 100PercentFedUp.com, Kristina Karamo, a Republican and the state’s first black, female candidate for secretary of state, “delivered boxes of thousands of affidavits” to acting Secretary of State Jocelyn Benson.

Ironically, a valid photo ID is required to enter the building to see Benson, who maintains that voter ID laws are inherently racist, according to the report.

“Does this mean the Sec of State Benson is a racist?” Karamo asked in a video posted by the outlet.

A security guard put a wrench in Karamo’s plans, the report said. He prevented her from entering the building with the affidavits, then left the scene for a moment and returned, informing Karamo and others that “he didn’t believe anyone would sign the form Karamo brought to prove the boxes had been received,” according to the report.

The guard later said that the secretary of state’s office would rubber-stamp the form but would not sign the receipt of delivery.

Of course, we’ve witnessed the uphill battle for election integrity since November, and the Michigan fight is no exception.

“If we do a deep-dive forensic audit similar to Arizona, it will do either one of two things,” Matt Seeley, spokesman for the Michigan Conservation Coalition, said during a phone interview with JustTheNews. “It will prove that all of the politicians who say there’s nothing to see there, that they were right. Or it will prove that there’s a big problem with the integrity of our elections and that we need to address it in a major way.”

He also reiterated that this isn’t a Republican or Democrat issue, but rather an issue that speaks to all voters.

Seeley is right — and polls are on his side.

One November poll from Politico indicated that an alarming 70 percent of Republicans didn’t believe the 2020 election was “free and fair.”

In a separate Rasmussen poll that month, even 30 percent of Democrats said they believed it likely or very likely that votes were stolen from former President Donald Trump.

Huge: “How likely is it that Democrats stole votes or destroyed pro-Trump ballots in several states to ensure that Biden would win?”

So where does that leave voters? Discouraged and feeling as if their votes will not count in future elections.

As Arizona comes to the final stages of its election audit, we’re left to wonder what might happen in Michigan in the weeks — and months — to come.

The patriots have done their part; now it’s time for state officials to do theirs.