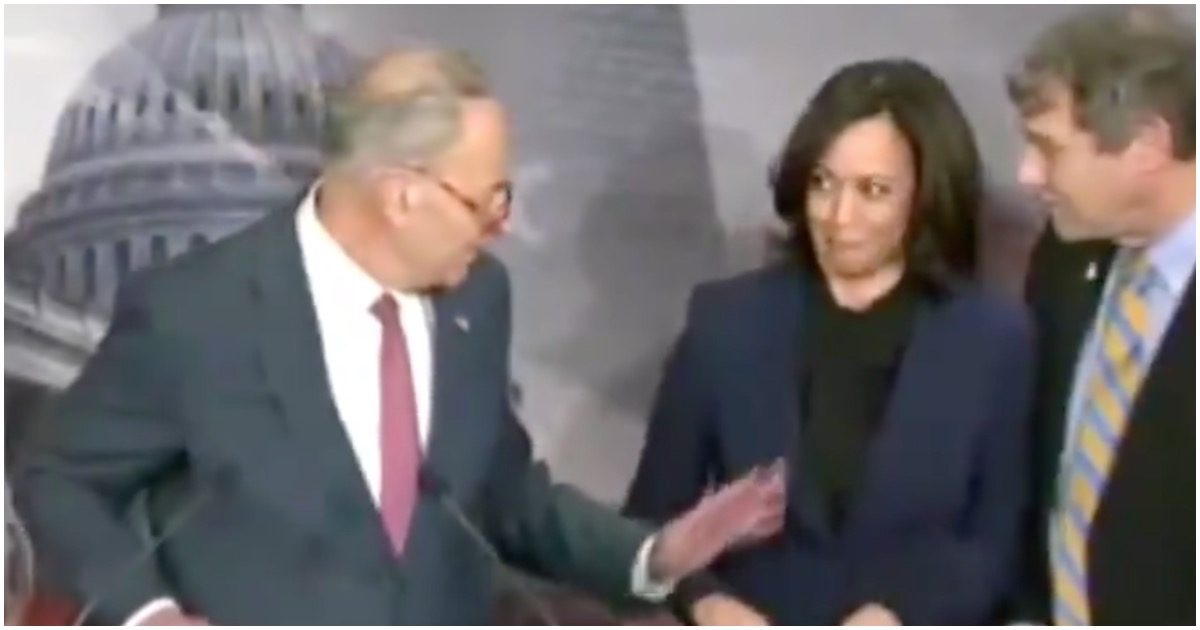 Democrats love clowning around during press conferences. Below you’ll see Chuck Schumer telling failed presidential candidate Kamala Harris to be quiet. Below that, you’ll see Ilhan Omar and Rashida Tlaib refuse to stop talking at a different presser. What it shows is a lack of respect.

Trending: Trump Steps Back From Insurrection Act, But Not Before Military Leaders Issue Strong Rebuke

Schumer, joined by Harris, Sen. Sherrod Brown, D-Ohio., and Sen. Patty Murray, D-Wash., held a press conference on Friday as Democrats continued to pressure Senate Republicans to allow additional witnesses to give their testimony. But as a reporter began asking a question to the lawmakers, Harris was seen having a good chuckle with her Ohio colleague, prompting the minority leader to halt Harris’ laughter.

When you worked really hard on the presentation but the rest of the team that didn't do any work won't stop giggling behind you pic.twitter.com/OeorVn44a7

Remember: Democrats said that #impeachment was "sad" and "somber."

Did Senator Harris not get the memo? 🧐 https://t.co/GdK3vlooCC

.@SenSchumer: "I believe that the American people should hear what every Senator thinks and why they're voting the way they're voting. And we will do what we can to make sure that happens." pic.twitter.com/vL3RMGfg2d

While Tlaib and Omar were laughing it up and telling jokes with Rep. Primala Jayapal during a press conference where Rep. Sheila Jackson Lee was talking about American troop casualties in Iraq, Alexandria Ocasio-Cortez remained silent.

When compared to Omar, Tlaib, and Jayapal, AOC now looks like a pro-American Trump supporter – in this particular instance.

Does she regret saying that?

HARRIS: "I would never condone anyone using that word in any way shape or form, even including the guy, against the guy I’m running against. Period. Period. Period"

"I have worked my entire career to do a number of things including to ensure our disability community receives the dignity and the rights that they deserve. I just… rolled out a policy on that, I think I might be one of the only candidates that did."

"That is a reflection of just my long standing commitment to the dignity and the rights and accessibility and all of the associated points about the rights of our disability community," Harris says on her disability plan.

More on her plan here:https://t.co/YxgtAxB2d9

@KamalaHarris told me that “in the year 2019, people should know it’s hurtful.” She said she did not hear him use the term.

Flashback: County Records Contradict Warren’s Claim She Was Fired for Being Pregnant

‘Bloodletting And Wilding’ Are Part Of An Agenda To Tear Down America
June 5th, 2020 Clash Daily