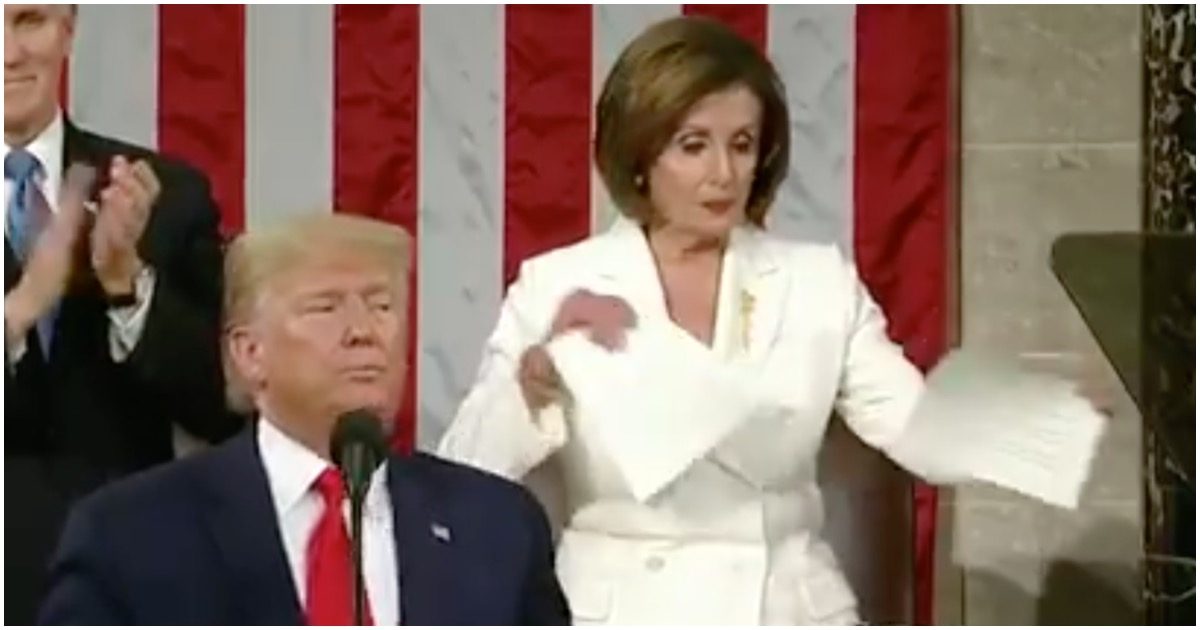 Speaker Nancy Pelosi (D-CA) apparently thought she was going to come away looking good for ripping up President Trump’s State of the Union address script in front of the cameras. She was wrong.

Her little stunt has backfired in a way she probably didn’t see coming, considering Dems generally have very poor foresight.

A top congressman and prominent Democrat law professor are both calling on House Speaker Nancy Pelosi to resign after her conduct during President Donald Trump’s State of the Union address last night.

Nancy Pelosi should step down as Speaker. I'm confident that the American public will be directly sending her that message themselves later this year if she doesn't read the tea leaves herself and resign on her own terms today. It's time.

Turley wrote about the first time that he walked onto the floor of the House of Representatives 44 years ago, saying, “The country was deeply divided, but both parties maintained the tradition of civility and decorum. I was struck how members, even in the heat of furious debates, would not attack each other by name and followed rigid principles of decorum. They understood that they were the custodians of this institution and bore a duty to strengthen and pass along those traditions to the next generation.”

Check out the pre-rip footage:

10:24 PM: Pelosi holds up the already torn paper and finishes ripping it in half. pic.twitter.com/IR2y9CeYVo

America is thriving economically, no thanks to Nancy or any Congressional Democrat. The best part is that President Trump hasn’t had to use a million executive orders to get his agenda passed, unlike his predecessor.

Check out Pelosi on live TV yesterday. Talk about ridiculousness!

Pelosi said today:
– Trump won't be president next year "one way or another"
– Dems may "have him removed sooner" than the election
– Trump "will be impeached forever"

It's clear: Impeachment was a Democrat hit job to stain Trump’s legacy and hurt him at the polls. Nothing more. pic.twitter.com/LY4TUwNiuZ