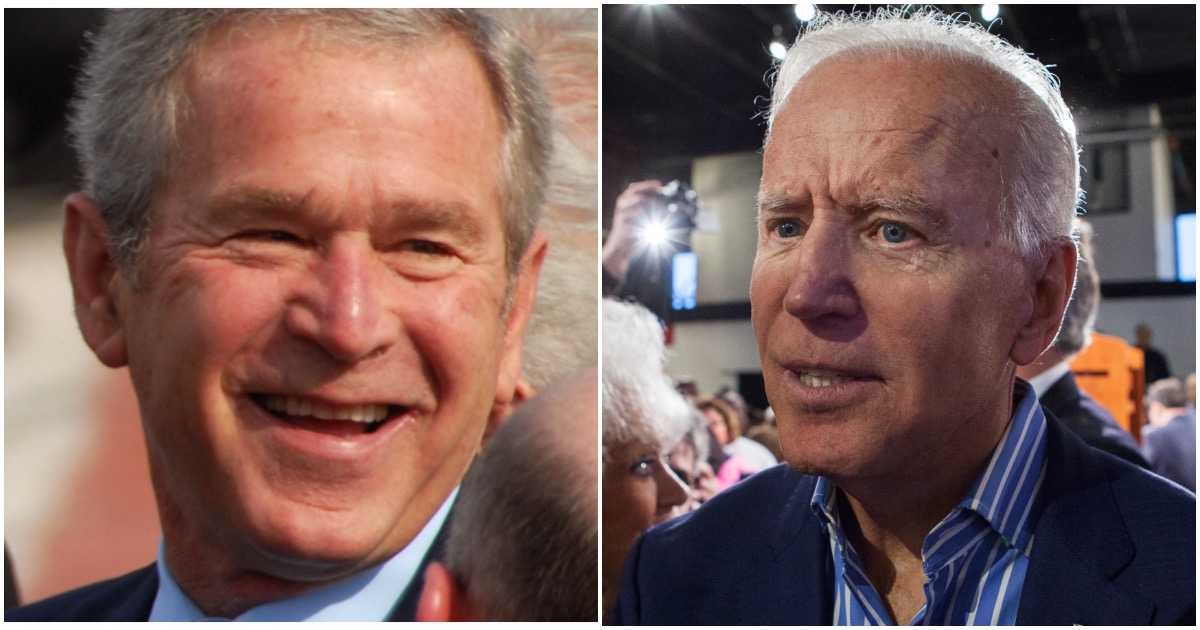 There’s definitely something wrong with the 2020 Democrat “frontrunner” at this point.

The guy is just not in control.

He can’t remember the simplest details and he’s even starting to make stories up out of thin air.

Heck, even David Axelrod called him out for being such a goof.

But to not recall who was president before Donald Trump?

Former Vice President Joe Biden was speaking in New Hampshire Friday when he once again made a verbal gaffe, referring to George W. Bush as the “last president.”

“I’m the only guy that’s beaten the NRA, and my state is a big gun-owning state because of hunting,” Biden said in Laconia, New Hampshire, according to a video posted by the GOP War Room.

“I’m the only guy that’s beaten them twice. I got assault weapons banned for 10 years, it had to be reauthorized because of hanging chads in Florida. The last president said no, I’m not going to reauthorize it.”

What sense does it make to beat up on people who had nothing to do with a particular incident? These George Floyd rioters and looters are nothing but bullies who want attention. They’re bored. They weren’t given enough attention as children – or maybe too much. And now, innocent Americans are paying the price. On Saturday, the mayor of Nashville invited protesters to join him at city hall. What happened next was a complete disgrace. LOOK: https://twitter.com/JohnCooper4Nash/status/1266761804316921858?ref_src=twsrc%5Etfw%7Ctwcamp%5Etweetembed%7Ctwterm%5E1266761804316921858&ref_url=https%3A%2F%2Fwww.thegatewaypundit.com%2F2020%2F05%2Fnashville-mayor-urges-people-join-black-lives-matter-protest-saturday-leftist-mob-torches-city-hall-nashville-courthouse-video%2F WATCH: https://twitter.com/Breaking911/status/1266905816856215552?ref_src=twsrc%5Etfw%7Ctwcamp%5Etweetembed%7Ctwterm%5E1266905816856215552&ref_url=https%3A%2F%2Fwww.thegatewaypundit.com%2F2020%2F05%2Fnashville-mayor-urges-people-join-black-lives-matter-protest-saturday-leftist-mob-torches-city-hall-nashville-courthouse-video%2F https://twitter.com/KeithnNashville/status/1266908824243441664?ref_src=twsrc%5Etfw%7Ctwcamp%5Etweetembed%7Ctwterm%5E1266908824243441664&ref_url=https%3A%2F%2Fwww.thegatewaypundit.com%2F2020%2F05%2Fnashville-mayor-urges-people-join-black-lives-matter-protest-saturday-leftist-mob-torches-city-hall-nashville-courthouse-video%2F In Dallas, a business owner was severely beaten by wild thugs simply for protecting his shop. LOOK: https://twitter.com/ElijahSchaffer/status/1266925493384736769?ref_src=twsrc%5Etfw%7Ctwcamp%5Etweetembed%7Ctwterm%5E1266925493384736769&ref_url=https%3A%2F%2Fwww.thegatewaypundit.com%2F2020%2F05%2Fhorror-dallas-business-owner-tries-defend-shop-sword-looters-leftists-stone-kick-beat-skateboard-not-moving%2F https://twitter.com/ElijahSchaffer/status/1266930823934152706?ref_src=twsrc%5Etfw%7Ctwcamp%5Etweetembed%7Ctwterm%5E1266930823934152706&ref_url=https%3A%2F%2Fwww.thegatewaypundit.com%2F2020%2F05%2Fhorror-dallas-business-owner-tries-defend-shop-sword-looters-leftists-stone-kick-beat-skateboard-not-moving%2F https://twitter.com/ElijahSchaffer/status/1266927491949588485?ref_src=twsrc%5Etfw%7Ctwcamp%5Etweetembed%7Ctwterm%5E1266927491949588485&ref_url=https%3A%2F%2Fwww.thegatewaypundit.com%2F2020%2F05%2Fhorror-dallas-business-owner-tries-defend-shop-sword-looters-leftists-stone-kick-beat-skateboard-not-moving%2F Stay tuned for more…