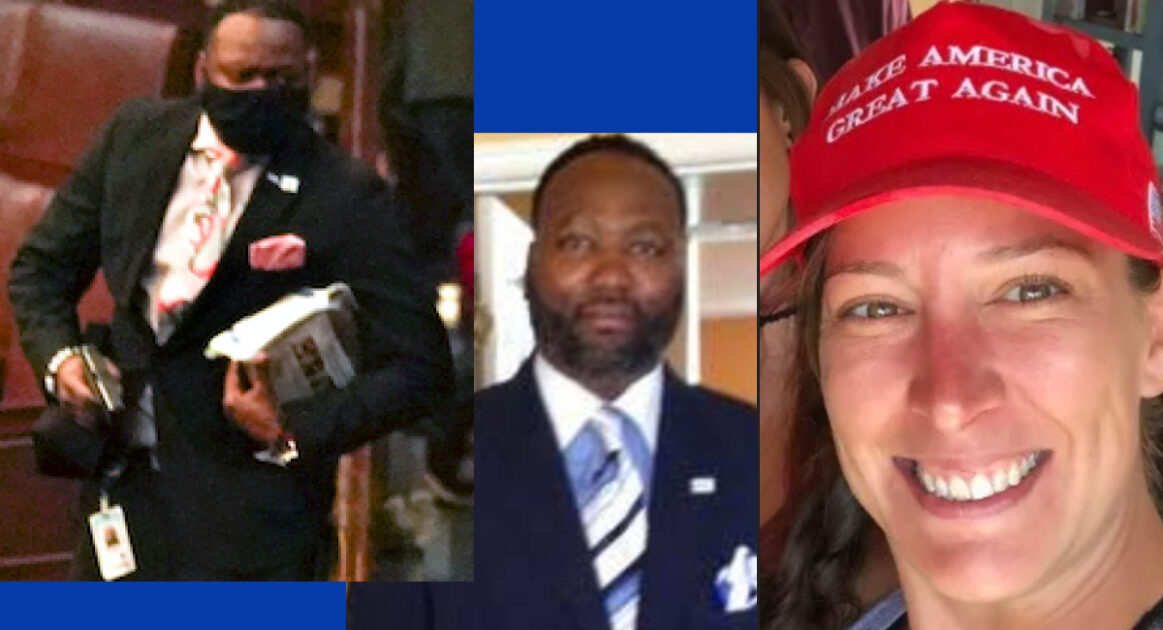 It can be reported with accuracy that the Capitol Police Officer who murdered Ashley Babbit on January 6 is one Lt. Michael L. Byrd, an officer with a troubling record of bumbling and violations.

According to Paul Sperry of RealClearInvestigations, it is beyond doubt that Lt. Byrd, a 53-year-old black man, is the officer who illicitly shot to death unarmed MAGA protester Ashley Babbitt, a 35-year-old US Air Force veteran who was among the crowd of people who entered the Capitol Building on the eventful day of January 6, 2021.

Contrary to the lies by Democrats, there were no armed “insurrectionists” who entered the Capitol that day. And the only person who died during the incursion was Babbitt, show down by the officer who was the ONLY person to fire a shot during the several hours-long event.

Babbitt served two tours in Afghanistan and Iraq before later deployments with the National Guard to Kuwait and Qatar, said her ex-husband, Timothy McEntee.

Even today, though, the U.S. government has officially refused to outright name Byrd as the assassin who took out an innocent military veteran. However, there is one bit of incontrovertible evidence that points to Byrd as the killer.

In a little-noticed exchange, Byrd was cited by the acting House sergeant at arms during a brief discussion of the officer who shot Babbitt at a Feb. 25 House hearing. Both C-SPAN and CNN removed his name from transcripts, but CQ Transcripts — which, according to its website, provides “the complete word from Capitol Hill; exactly as it was spoken” — recorded the Capitol official, Timothy Blodgett, referring to the cop as “Officer Byrd.” His name is clearly audible in the videotape of the hearing (see video embed further below).

Byrd appears to match the description of the shooter, who video footage shows is an African American dressed that day in a business suit. Jewelry, including a beaded bracelet and lapel pin, also match up with photos of Byrd.

In addition, Byrd’s resume lines up with what is known about the experience and position of the officer involved in the shooting — a veteran USCP officer who holds the rank of lieutenant and is the commander of the House Chamber Section of the Capitol Police.

Following the shooting, Byrd’s Internet footprint was scrubbed, including his social media and personal photos.

But Biden’s government is going all out to shield this killer from accountability.

Because Congress has exempted the USCP from Freedom of Information Act requests, the family is suing the D.C. Police “for documents that identify the officer who shot Babbitt … as well as notes and summaries of what the officer said regarding the shooting and the reasons he discharged his weapon.” (The D.C. Police has led the investigation into Babbitt’s shooting.) A hearing before a judge is scheduled for Sept. 3. Washington-based watchdog Judicial Watch also is suing for the records.

“They sit back, and they completely refuse to release the name of their own police officer that was involved in a shooting of an unarmed woman,” said Ashli Babbitt’s husband, Aaron. “It’s ridiculous, it’s absolutely ridiculous.”

Byrd has a history of questionable actions.

For instance, in 2019, Byrd was investigated for leaving his service weapon laying unattended in a Capitol bathroom. The firearm was Byrd’s service Glock 22, the same style weapon that was reportedly used to murder Babbitt.

Biden is shielding this out of control, dangerous cop from the public.

One has to wonder why?