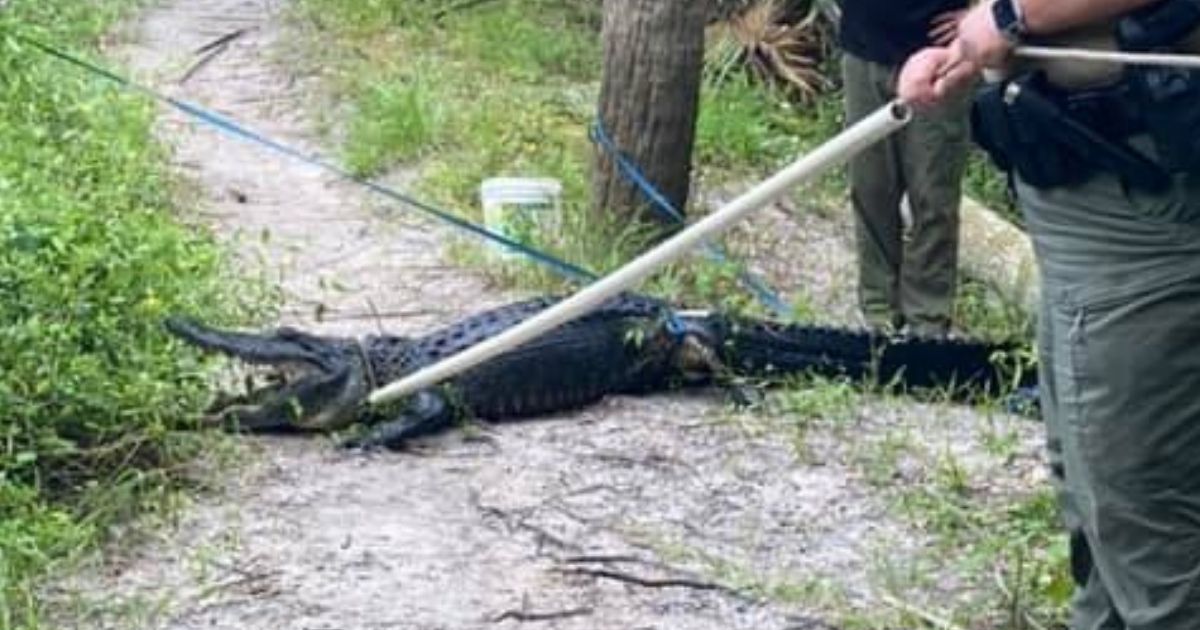 Lots of people talk about being in the right place at the right time, but there are certainly cases of the opposite as well. This appears to be one of those.

On Monday, Robert Bassett of Palm City was biking the trails in Halpatiokee Regional Park in Stuart, Florida, a 500-acre preserve with lots of bike trails and lots of warning signs.

Those signs have to do with a local feature that is reflected in the name of the park, which in Seminole means “Alligator Water.”

According to fellow mountain biking enthusiast Scott Lorraine, Bassett lost control coming around a corner, landed right on a large female alligator who responded by biting him and ended up in the stream below the path, seriously wounded.

This time of year is when alligators are often sitting on nests and tending to young. The 8-foot-6-inch female alligator was likely guarding a nest, and she treated Bassett like the intruder he appeared to be, biting him and spinning.

Thankfully Charles Shannon was nearby, walking his dog, when he spotted the struggle and came to the poor man’s aid.

“He was hanging on roots like five feet below,” Shannon added to WPTV-TV. “It was hard to get him out.”

Shannon used his dog’s leash to form a makeshift tourniquet and credited another bystander, a nurse from Germany, with helping out until first responders showed up.

Bassett sustained severe wounds in his right thigh and torso and remains in serious condition at Lawnwood Regional Medical Center, but without Shannon’s help, he could have been dead in the water.

Lorraine said that even though Bassett experienced a freak accident, it was a “blessing” that someone had been close enough to help.

“Total bad luck to total blessing to have somebody there,” Lorraine said. “He said it took him down, three spins he admits it too, he said ‘I’m dead,’ because the thing had him, grabbed him right by the leg. You can see how big the gator is.”

“We put barricades there because we knew it was it so close to the water,” he continued. “We really had it there in case someone did go in and they could pull themselves out, but he didn’t have a chance to do that. It’s just totally weird, to me it’s as weird as a lightning strike.”

After Bassett was attended to, the Florida Fish and Wildlife Conservation Commission had to figure out what to do with the alligator. They contracted trapper John Davidson to catch her.

Davidson told The Palm Beach Post that the alligator will be relocated to a farm near Fort Drum.

“She was sitting 10 feet off the bank when I showed up,” Davidson said, according to WPTV. “That leads me to believe that she was a female and sitting on a nest somewhere close. So we’ll attempt to rescue the babies if we can.”

A man said he was attacked by an alligator, pictured on the left, after falling off his bike in Florida.

The unidentified victim suffered serious injuries from the bite, authorities say, and was loaded into a helicopter. https://t.co/8tkEqlhnVT pic.twitter.com/zJGeSM6PIY

“This is really pretty out here. People hike and walk and you’re with nature. Especially this time of year, you just have to be aware of what’s around you.”

State Rep That Accused Cops of Being Racist Has Been Accused of Punching, Hitting and Choking Women