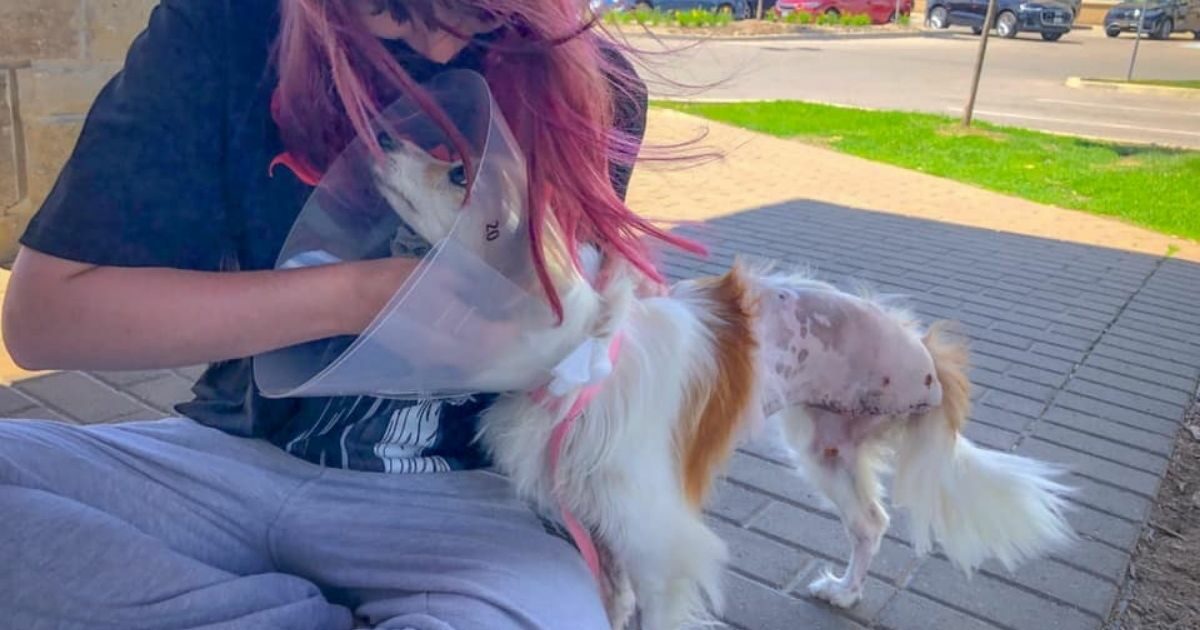 On June 9, Jennifer Jenkins of Orillia, Canada, had her 21-year-old son, Damian, take the two family dogs out for a walk.

Partway through their excursion, the trio was approached by a large, black dog who was not on a leash. It set its sights on Nina, the larger of the two small dogs, and attacked.

“My son had our other (even smaller) dog in his arms, but Nina was snatched and my son was helpless; he screamed for help until he lost his voice,” Jenkins wrote on a GoFundMe page set up for the poor dog.

“It seemed like ages before anyone came to the scene, but by then, Nina had been bitten, dragged and shook repeatedly in a savage, unrelenting attack.”

Damian, who has autism, struggled to keep the leash but Nina and the leash were eventually torn out of his hands in what was a “brutal and unrelenting frenzy,” according to Jenkins.

Eventually, a neighbor heard the commotion and tried to help Damian retrieve Nina, but it took the attacking dog’s owner stepping in once he got home to get the dog to release the poor little pup.

“My son is autistic and was just traumatized,” Jenkins told Barrie Today. “When he picked up Nina, the owner asked him if he wanted a ride home. … He was responding to this incident like it was nothing.”

But it was definitely not nothing: After getting checked out at VCA O’Sullivan Animal Hospital, Nina’s back left leg was found to have over 20 puncture wounds, compression wounds, missing skin, missing flesh and bruises.

The local hospital wasn’t equipped to handle the extent of her injuries, so Nina was transported to another hospital. Her back leg was so mangled that it had to be amputated, and the family is looking at over $17,000 in medical bills.

There has been no attempt from the attacking dog’s owner to reach out to the family, according to Jenkins, but even as radio silence ensues from that particular party, other neighbors have come forward to let Jenkins know that the attacking dog has a history of attacking their dogs, too.

“We are planning to take legal action against these ignorant and negligent dog owners, especially since learning from their neighbors during my own investigation yesterday, that they have a long history of violent incidents; not just with other innocent dogs like Nina, but with children as well,” Jenkins wrote on the GoFundMe page.

“I am horrified that this is still going on and we aim to put a stop to them once and for all; but, our first priority of course, is Nina.”

Jenkins also shared that they got Nina and their other dog shortly after leaving an abusive relationship, and that they are “our healing, they are family, they are a huge part of our happiness, our balance, our joy, our peace.”

So far, the family’s GoFundMe has raised almost $7,000 in U.S. currency. Based on Jenkin’s Facebook posts, Nina went home on Wednesday and is getting lots of love as she continues to recover.

Ontario Provincial Police Constable Ted Dongelmans confirmed that a police report has been filed and an investigation is underway.