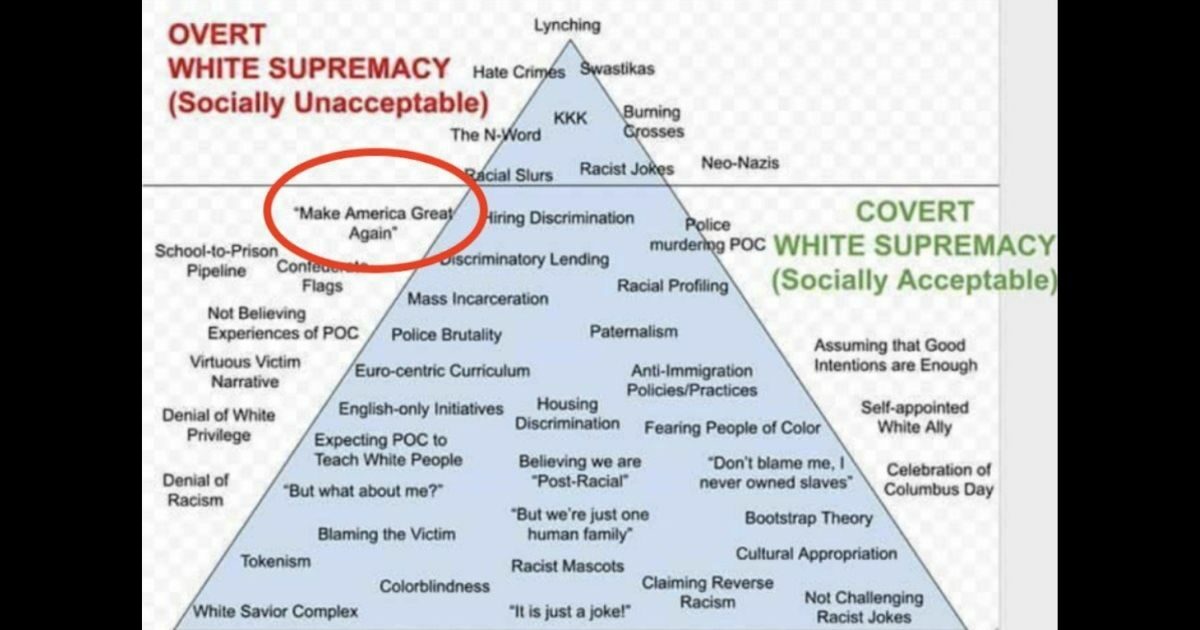 The lies of critical race theory are being spread through various outlets across the country. One place where lies about “inherent racism” have been heavily promulgated is inside public schools.

According to Turning Point USA Chief Creative Officer Benny Johnson, an area education agency in Iowa has expanded its definition of racism to include practically anyone who disagrees with it politically.

Johnson tweeted a picture on Tuesday of a chart that was reportedly shown to teachers and that originated with the Mississippi Bend Area Education Agency. (Iowa’s area education agencies are not school districts, but rather aim to “work as partners with children, families, and educators to ensure equitable, efficient, and effective educational services that prepare all Iowa children for a life well-lived,” according to Iowa’s Area Education Agencies.)

The chart provides what it calls “examples of racism.” Some of them are classified as “overt white supremacy,” and they are mostly things that any rational person would oppose. Examples include “lynching,” “hate crimes” and “swastikas.”

Underneath these examples are an array of ideas the chart defines as “covert white supremacy.” One of the ideas in this category is the phrase “Make America Great Again.”

This is done through MANDATORY Critical Race Theory training FORCED on teachers at taxpayer expense.

The suggestion that former President Donald Trump’s campaign slogan is inherently “white supremacy” is absolutely ridiculous. The left cannot even provide evidence that Trump himself is a white supremacist, let alone every person who supported him.

Johnson also pointed out that Trump won Iowa in the 2020 election by more than eight percentage points.

This means teachers were reportedly being told to define the majority of people in their state as “covert white supremacists.”

This is a ROCK SOLID, REAL WORLD application of Critical Race Theory being used as a *political* weapon to target Republicans.

This is NOT education.

It is naked political vengeance using the state education system and our children’s educators.

This training is CRT in practice pic.twitter.com/U4jaEZaVdU

“This is NOT education,” Johnson wrote. “It is naked political vengeance using the state education system and our children’s educators.”

As Johnson pointed out, this type of training underscores how dangerous the ideas contained in critical race theory can be. The theory suggests that every white person is inherently racist, whether they know it or not.

The goal of this type of training is not to eradicate racism, and it clearly deepens racial divides much more than it heals them. However, Democrats have a vested interest in convincing white people they are inherently evil.

If voters actually believe they are evil, Democrats can utilize that guilt to convince them to support leftist policies. By classifying “Make America Great Again” as “white supremacy,” this area education agency has accidentally said the quiet part out loud.

Other terms defined as “covert white supremacy” by this chart include “claiming reverse racism,” “denial of racism” and “not believing experiences of people of color.”

In other words, every white person must admit not only that they are racist, but also agree that it is impossible for a person of color to ever be racist. Those are both disgusting and completely false implications.

In addition to the chart, teachers were reportedly given definitions of terms including anti-racist and critical race theory. Johnson argued the very definition of CRT in this presentation explains how dangerous it is.

The presentation itself defines ‘Critical Race Theory’ as a tool for the destruction of America:

“Unlike traditional civil rights, which embraces … step by step progress, critical race theory questions the very foundations of the liberal order … and principles of constitutional law,” the definition read.

On June 8, Republican Iowa Gov. Kim Reynolds signed a bill prohibiting “the idea that one race or sex is inherently superior to another race or sex [and] that the United States of America and the state of Iowa are fundamentally or systemically racist or sexist” from being included in mandatory diversity training, KCCI-TV reported.

While Johnson did not specify the date on which the area education agency’s reported training took place, he said that it would not have been allowed under this new law.

On the other hand, Reynolds issued a statement on the incident following an inquiry from Johnson.

“This is indoctrination, not education,” Reynolds said. “And it’s exactly why I took action to ban teaching divisive concepts and critical race theory in Iowa schools. Kids need to be taught how to think and not what to think.”

BREAKING: Statement from Gov. @KimReynoldsIA: “This is indoctrination not education. And it’s exactly why I took action to ban teaching divisive concepts and critical race theory in Iowa schools. Kids need to be taught how to think and not what to think.”

The alleged anti-Republican training from this area education agency is a very fitting example of the ways Democrats exploit race for their own benefit. This type of partisan brainwashing should be banned in every public school across the country.