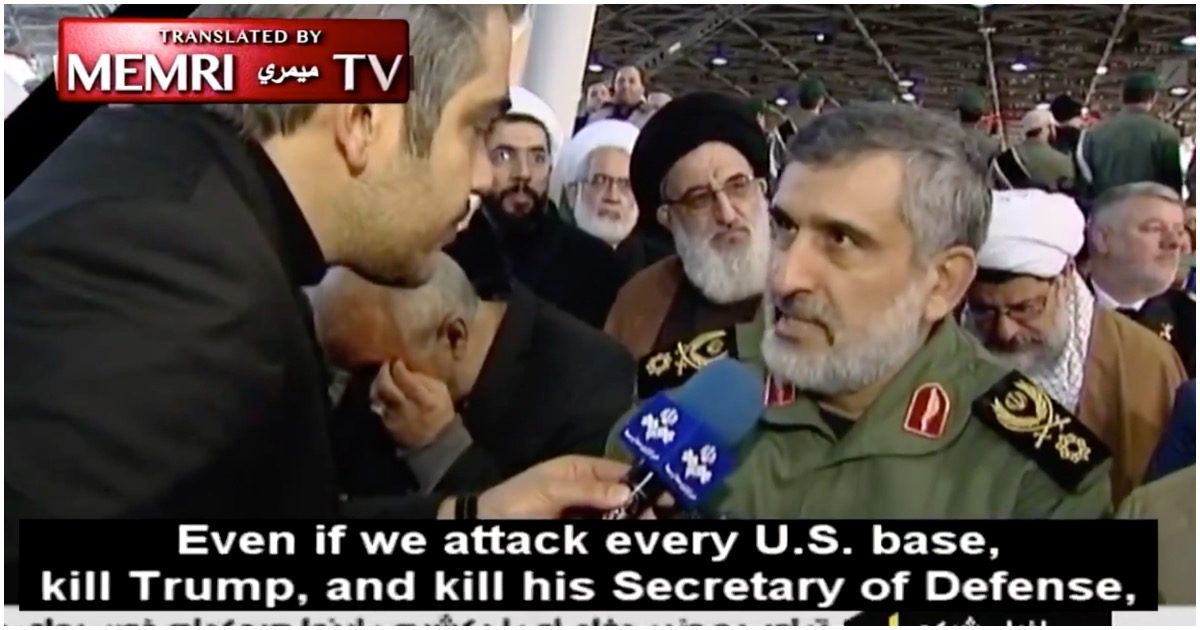 Delusions of grandeur. Naivety. Ignorance is bliss. All apply to Iran. Like American Democrats, bloodthirsty Iranian leaders think they can take down President Trump with useless threats and pathetic actions. They forget that POTUS is not as easy to deal with as Obama, who would rather toss money at a problem instead of attempting to do what needs to be done. From Daily Wire:

General Amir Ali Hajizadeh, commander of the Islamic Revolutionary Guard Corps’ Aerospace Force, said this week, “Even if we attack every U.S. base, kill Trump, and kill his Secretary of Defense, this would not be enough to avenge the blood of Hajj Qasem (Soleimani.) The blood vengeance for Hajj Qasem should take the form of expelling America’s evil from the region. We should cleanse the region of their accursed presence.”

Hajizadeh said that it will “absolutely” happen, adding, “[Trump] cannot threaten the Iranian people, who sacrificed 300,000 martyrs. Who the hell is he to threaten us? He must order many coffins for his soldiers before making any threats.”

General Amir Ali Hajizadeh, Commander of IRGC Aerospace Force: Killing President Trump and His Defense Secretary, Attacking Every U.S. Base Would Not Be Enough to Avenge Soleimani’s Blood pic.twitter.com/wqV77Gdp8x

Senior IRGC General Naqdi Predicts: Muslims Will Pull Americans out of Embassies and Military Bases and Hang Them Blindfolded from Trees pic.twitter.com/97nVFah8f7

After Trump warned Iran that he would retaliate “very fast and very hard” if the world’s leading state sponsor of terror acted on their threats to harm Americans or American assets, AOC, naturally, sided with the terrorists and blasted Trump for being a radical.

This is a war crime.

Threatening to target and kill innocent families, women and children – which is what you’re doing by targeting cultural sites – does not make you a “tough guy.”

It does not make you “strategic.”
It makes you a monster. https://t.co/IjkNO8BD07

Happy 1 year anniversary to dunking on haters and advocating for peace✌🏽 https://t.co/2d5J9UaZL1

Border Patrol On Alert After Intel Warns of ‘Suicide Bomber En Route to the U.S.’ (Details)