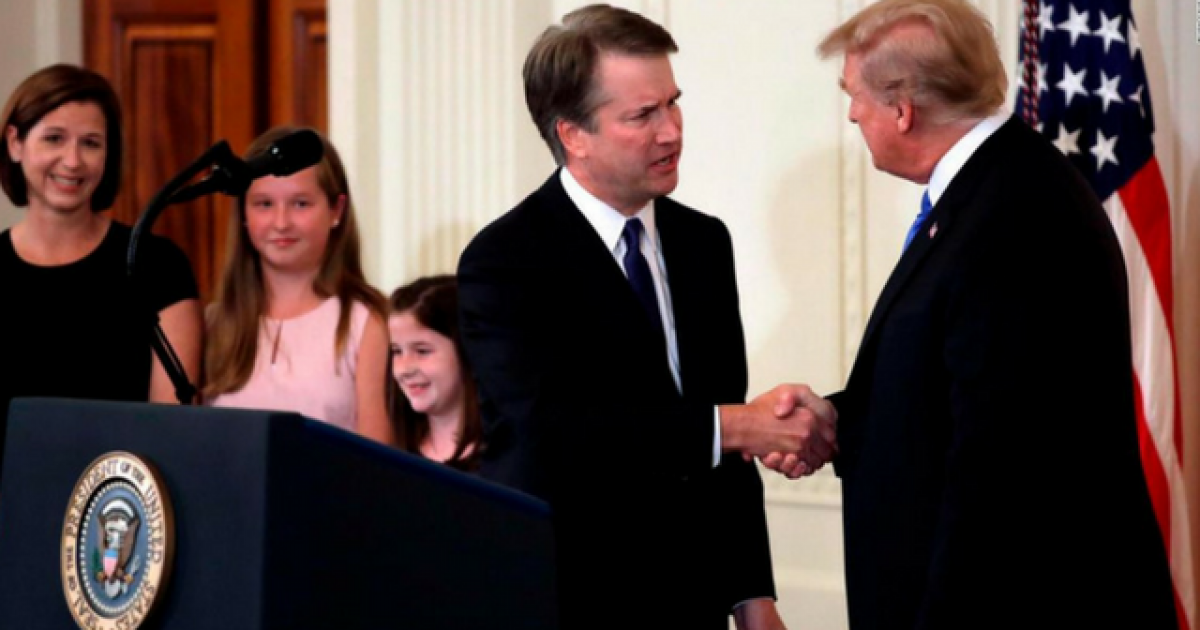 Brett Kavanaugh, Trump’s nominee to the Supreme Court has been subject to the predictable barrage of criticism and apocalyptic language (Hillary Clinton thinks he’ll set us back to the 1850s, for example, which is as hyperbolic as it sounds).

So as they claim millions will die once he’s confirmed and that he simply cannot serve because he once enjoyed eating spaghetti with ketchup (wut), it was only a matter of time before he somehow got sucked into the modern-day witch trials that are the #MeToo movement.

Now, not to belittle the sexual harassment and abuse that women who have come forward during the #MeToo movement have experienced. Very real victims with very troubling stories of very real abuse have bravely shared their stories.

But it is impossible to deny that the #MeToo movement has very much mimicked the famed Salem witch trials, in which it became all too easy to accuse anyone of being a witch and watch them tried, convicted, and punished entirely in the court of public opinion.

So sooner or later, someone was going to go after Kavanaugh with this accusation–and it’s honestly surprising it didn’t come sooner.

Seemingly inspired by the political campaign against Congressman Jim Jordan (R-OH) who coached a wrestling team at Ohio State while a doctor who would later be accused of sexual abuse attended his team, Kavanaugh has also been hit with claims that he “had to have known” about sexual impropriety committed by a former boss.

The Daily Wire has the story:

Kavanaugh had previously clerked for 9th U.S. Circuit Judge Alex Kozinski from 1990 to 1991. Kozinski abruptly retired last year after 15 women accused him of sexual harassment. Now [feminist group] Ultraviolet is tying Kavanaugh to Kozinski by demanding an investigation into whether the Supreme Court nominee knew about his former boss’ alleged abuse.

“Judge Kozinski’s office had a long history of being a toxic and dangerous environment for women,” chief campaigns officer for UltraViolet, Karin Roland, told McClatchy in a statement. “The American public deserves to know what Kavanaugh saw and heard, and if he did witness or hear about any harassment, what he did or could have done to report it.”

Unlike the rumors surrounding Jordan, no one has come forward to claim Kavanaugh knew about Kozinski’s abuse but did nothing, but critics wrote in a memo prior to Kavanaugh’s nomination that he must have known.

Kozinski was accused of “abuse, including showing them pornography in his chambers, forcibly kissing them and inviting them to have sex,” according to McClatchy.

Unfortunately for UltraViolent and Kavanaugh’s enemies on the left, the allegations aren’t holding much water when you consider how many women have worked with Kavanaugh and have jumped to his defense.

Multiple former colleagues and employees of Kavanaugh have now reached out to defend the judge.

Eighteen women who formerly clerked for Kavanaugh also signed a letter on his behalf and sent it to the Senate Judiciary Committee, which is responsible for holding a hearing on Kavanaugh’s nomination.

“We know all too well that women in the workplace still face challenges, inequality, and even harassment. Among other things, women do not enjoy a representative share of prestigious clerkships or high-profile legal positions,” the women wrote. “But this Committee, and the American public more broadly, should be aware of the important work Judge Kavanaugh has done to remedy those disparities. In our view, the Judge has been one of the strongest advocates in the federal judiciary for women lawyers.”

Indeed, when Kavanaugh, who one former clerk described as a “gentleman”, was first nominated he mentioned how proud he was to have had so many women clerk for him.

Sexual abuse allegations should not be a club to beat ideological opponents over the head with; it is a very real sin against one’s fellow man that should be taken seriously, outside the realm of politics. The very fact that left-wing feminists try to make it political speaks to how very little it has to do with actual women’s equality and how much it has to do with a specific ideology.

Kavanaugh has been the SCOTUS nominee for exactly one week.

Can you imagine what else they’re going to try to fling at him between now and his confirmation hearing in October?