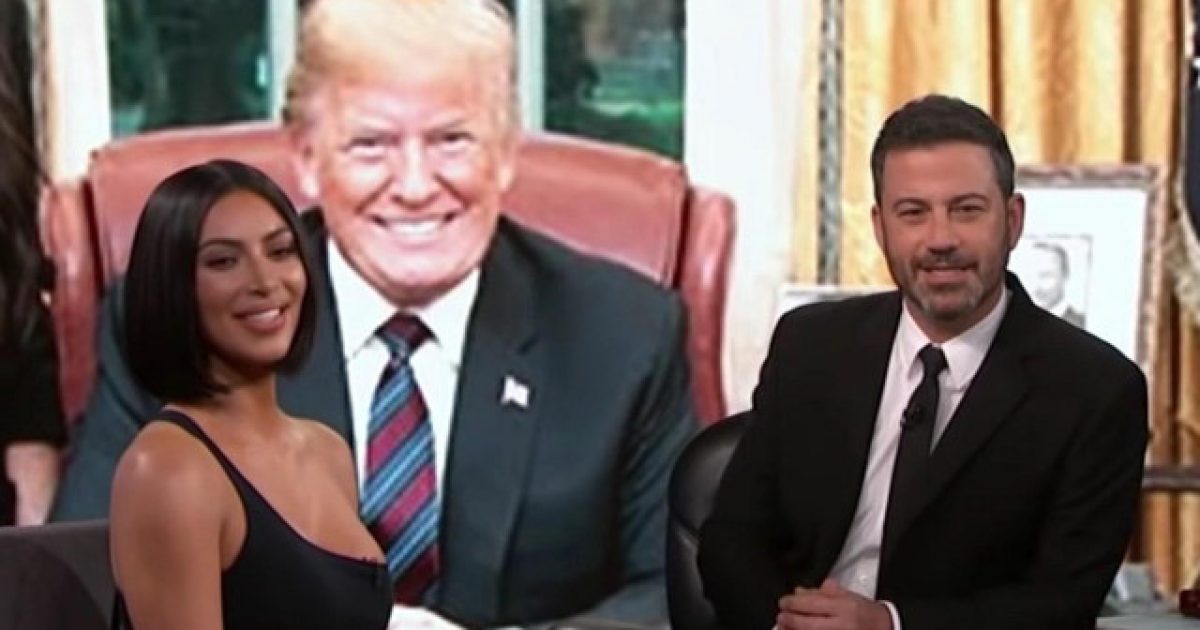 Late night talk show host Jimmy Kimmel decided to take an opportunity to mock President Trump and First Lady Melania Trump while conducting an interview with Kim Kardashian. However, if he was expecting to rile her feathers or get her to bash on the president, his plan backfired egregiously.

The main reason for Kimmel’s shenanigans was because it wasn’t long ago that Kardashian had a visit to the White House fighting to help a woman get a presidential pardon and be released from prison. Her meeting went well and the president had the woman released.

In the interview on “Jimmy Kimmel Live” Monday, the late night critic of the president ask Kardashian to explain how it was that she ended up in the Oval Office seeking a pardon for a woman with a life sentence.

Kardashian related that she was in a nude photo shoot when the president called, and Kimmel said that had she told him she was naked at the time, he would have freed the entire prison. Kardashian laughed, but didn’t add anything to his joke.

Kimmel then joked that first lady Melania Trump needed to be pardoned and freed by President Trump – Kardashian didn’t join in on this attack either.

When Kimmel asked if her husband Kanye West still supported the president, Kardashian responded that he did.

She explained that Kanye West “doesn’t necessary agree with the policies, he likes his kind of his personality and how he made it to be president when everyone really underestimated him.”

“He’s not political so he doesn’t really dig deep into what’s going on,” she added.

“I have nothing bad to say about the president and he’s done something amazing and so I am very focused,” she said to Kimmel.

“Right because you still have people on the list!” Kimmel mocked, referring to other people she wanted Trump to consider for a presidential pardon.

Even as Kimmel continued to slam on Trump, Kardashian stated that she hopes to have more meaningful dialogues with the president about issues she feels are important.

All in all, and this is something a lot of us probably never thought we’d say or hear coming from another live human being, Kim Kardashian seems like a smart, intelligent, objective person who legitimately wants to do a little bit of good in the world.

She certainly did the right thing by advocating for Alice Marie Johnson, a woman who is practically the poster child for the importance of criminal justice reform in this country.

Kimmel could actually learn a thing or two about treating the man in the Oval Office with respect from Kardashian. Again, when a Kardashian is the shining example of a model citizen, you know things are just about as bad as they can get.