Iran Has A Hissy Fit At World Cup
The Lid

A friend of mine recently commented that the ‘social’ justice movement in America is alive and well, and that great things have been happening. It then occurred to me, when you put any word in front of the word ‘justice,’ the true meaning of justice is altered.

Thomas Jefferson wrote that, “The most sacred of the duties of government is to do equal and impartial justice to all its citizens.” The hallowed duty to fulfill the promise of justice for all remains, or ideally should remain, as the guiding ideal for the people we elect to government.

I asked my friend for an example of social justice and was told that power lines being installed near poor neighborhoods instead of wealthier neighborhoods was a prime example. I then explained that that was not an issue related to ‘social’ justice but to justice itself. Social justice is some group’s attempt at righting what they consider to be wrong.

This is not 1860, or 1960. Today there are numerous avenues for illuminating any issue of merit. At the local level, there are zoning boards in every municipality, city councils usually with members on the left and the right, town hall meetings, public forums, newspapers, local television stations – a variety of entities that can be brought to bear to examine an issue and to forge some type of equitable redress if needed.

No form of political government is anywhere near perfect or even equitable, much of the time. Democracy is difficult, but all other forms of government are worse.

In a democracy, or representative republic, such as we have in the U.S., you can’t go off half-cocked and do exactly what you want because you think that a particular law is bad. You have to work to change the law, to change policies, to address inequities within the framework of democracy, and within the bound of the justice system.

Consider the phenomenon of sanctuary cities. For a sanctuary city to exist, one has to have a mayor, city council members, an alderman, and other committee members, including those whose were elected as well as as appointed, to believe that what they’re espousing is right, while ignoring what has been passed into law. This ruling class thus by-passes what a majority of citizens count on each and every day.

If laws routinely discriminate against one segment of the population versus another, then by all means work to change the law. When you substitute or insert catchphrases into the mix, such as ‘social’ justice, what that actually means is that you have another viewpoint of an issue. Further, you deem that your view and your actions are more meritorious than whatever came before them.

Years ago, by exhibiting such behavior, you would be regarded as a vigilante. What a 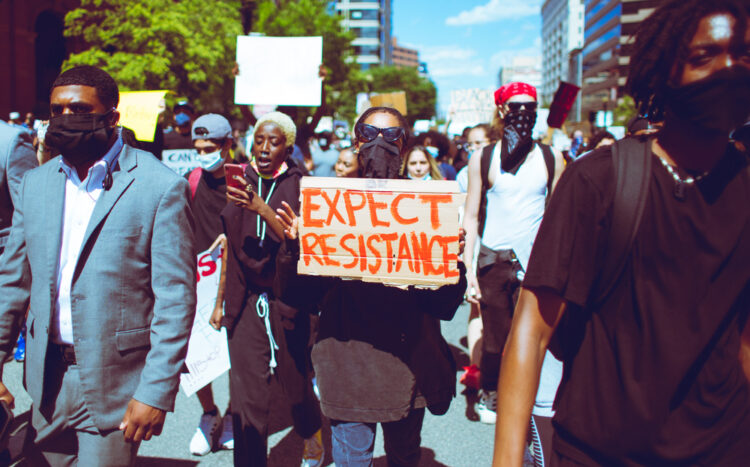 re vigilantes? A self-appointed group of citizens who engage in policy enforcement without having legal authority, usually because they deem the legal agencies to be inadequate.

Because we dwell in a society where the media is distinctly liberal, and even leftist – as we have witnessed with big tech and, unfortunately, a variety of government agencies – those advocating for ‘social’ justice have the wind at their backs. Yet, they violate the rights, and votes, of half the population and perhaps much more.

We All Have Opinions

Related:
Washington Post: Vaccinated Are the Majority of COVID Deaths

Any one of us could offer a running list of issues that we’d like to change in society. If we simply decide, willy nilly, to start ignoring existing laws in favor of what we want to have done, how long will it take before society breaks down completely? Taking the law into your own hands is the essence of what it means to be a vigilante. Vigilante-dominated societies are not healthy. Many of the people who reside in them live in constant fear.

Taking the law into your own hands is an ill-advised shortcut, a way to seek what you want without working through the system, however imperfect the system might be. This country, any country, does not need more vigilantism.

Jeff Davidson
Jeff Davidson is "The Work-Life Balance Expert®" and the premier thought leader on work-life balance, integration, and harmony. Jeff speaks to organizations that seek to enhance their overall productivity by improving the effectiveness of their people. He is the author of Breathing Space, Simpler Living, Dial it Down, and Everyday Project Management. Visit www.BreathingSpace.com for more information.
Interracial Commercials That Intentionally Contort American Demographics
Believe in Your Own Potential at Any Age
November 8, A Vital Date for Our Future
Make Your Boss Look Good, and Get Ahead
Breathing Space for November
See more...
Advertisement

Washington Post: Vaccinated Are the Majority of COVID Deaths

The liberal outlet came out with a stunning article just a day before Thanksgiving, one with a very interesting statistic about COVID deaths.
By Bryan Chai, Western Journal  November 28, 2022 Comment MoreShare

It is unclear what sort of response this will trigger from the Kremlin, but there is no doubt that some sort of rebuke is forthcoming.

Hmm…wonder what this could mean?

Is the White House scrambling to keep the Democrats’ ducks in a row?

It shouldn’t need to be said, but when the freedom of speech scares you, it may be time to reevaluate your relationship with your government.

The eruption is ongoing at the time of this writing.

Pope Francis reportedly had no idea that he was being recorded during his conversation with a cardinal last year.
By Peter Partoll, Western Journal  November 28, 2022 Comment MoreShare
Next