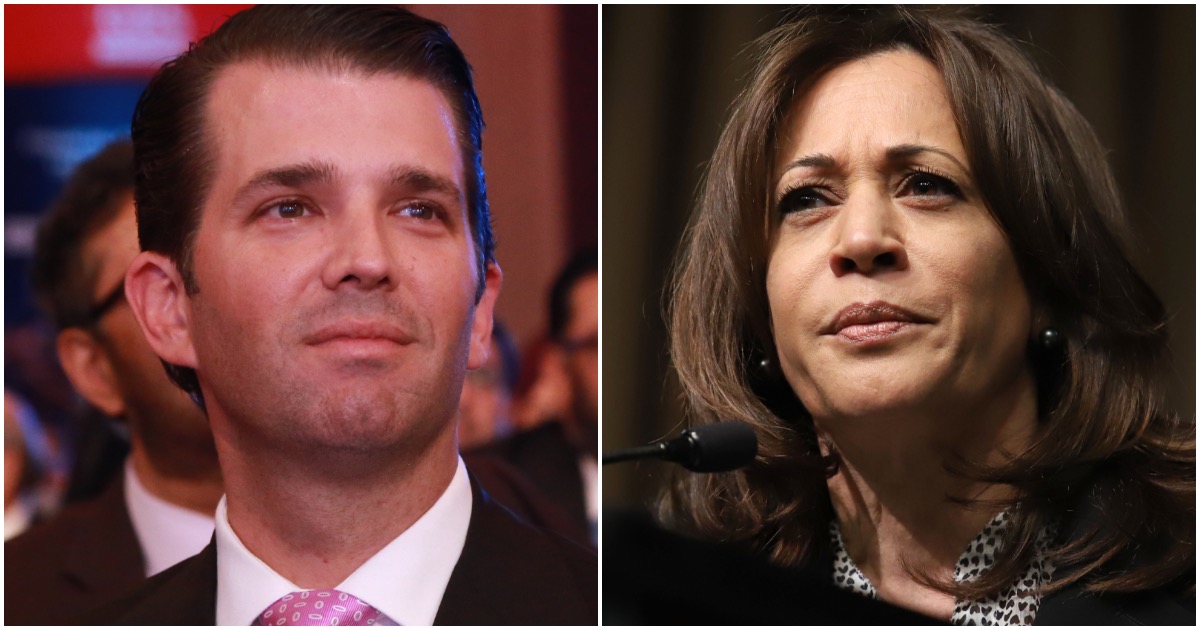 It won’t be too much longer before Kamala Harris is out of the 2020 presidential race. Many people probably figured she was already out, seeing as how Biden, Bernie, and Warren are the radicals who receive the most attention. They are media darlings, after all!

Regardless, the countdown clock is on for the California Senator and many other liberal candidate, such as Cory Booker (who?), Beta-male O’Rourke (why?), Marianne Williamson (what?) and Andrew Yang (huh?). Until then, Donald Trump Jr. is going to keep doing his best to expose the nation to their collective ignorance.

On Friday, Don Jr. went after Kamala. Why he gave her any attention at all is a bit of a mystery. But the end result was pretty funny. Check it out…

Why is @KamalaHarris the only person that laughs at her jokes… always way to long and way too hard? The most disingenuous person in politics… after Hillary.

Why is @KamalaHarris the only person that laughs at her jokes… always way to long and way too hard? The most disingenuous person in politics… after Hillary. pic.twitter.com/elskW29XeP

Harris responded: “You wouldn’t know a joke if one raised you.”

Based on your tanking poll numbers, what’s definitely a joke is your entire campaign 🤣 Yikes!

Based on your tanking poll numbers, what’s definitely a joke is your entire campaign 🤣 Yikes! https://t.co/3vkxo5gUyO pic.twitter.com/oKMCKuscBR

Source close to Don Jr. responds to Harris tweet: “We feel bad for Kamala at this point … she’s irrelevant. She’s a phony who should go back to lying about listening to Snoop Dogg before Snoop Dogg was even a rapper.”

Source close to Don Jr. responds to Harris tweet: “We feel bad for Kamala at this point … she’s irrelevant. She’s a phony who should go back to lying about listening to Snoop Dogg before Snoop Dogg was even a rapper.” https://t.co/0vzUvykFnO

.@KamalaHarris suggests her 2020 gun-control policies would have stopped the anti-police mass shooting in Philly. pic.twitter.com/72Rl8dhfde

Harris, like every other liberal running for president, is a hypocrite.

As she seeks to end the “gender pay gap” – a myth as big as climate change – Kamala fails to recognize that women on her own staff earn less than men.

Don’t you see the problem there, Senator?