Face it: Joe Biden HATES You And Wants You To SUFFER!
Conservative Firing Line

*NEW* BREAKING: Look What Biden Is BUILDING In Poland After The DISASTER In Afghanistan… Are You F**king Kidding Me?
America's Freedom Fighters

Kansas attorney general candidate Sarah Swain — who is a Democrat — has found herself embroiled in a potentially devastating controversy after posting a disgusting photograph featuring comic book superhero Wonder Woman choking a police officer with her lasso around his neck.

Swain has earned a reputation in her state for being vehemently anti-cop, which makes the posting of this photograph even more disturbing.

Since the flack started rolling in, Swain has issued an apology for the negative attention the poster has attracted.

The poster, which has hung in Swain’s law office for several years, featured a Wonder Woman-looking character lassoing a cop, binding him across his chest and around his neck.

The poster, which went viral on social media, drew so much criticism that she issued a statement on the matter, and the Kansas Democratic Party spoke out against the offending poster, according to KWCH-TV.

On Monday, the party said that promoting violence against police officers should disqualify Swain’s candidacy for attorney general and called for her to end her campaign.

Swain issued a statement Monday in response to the mounting criticism and calls for her to end her campaign for attorney general. 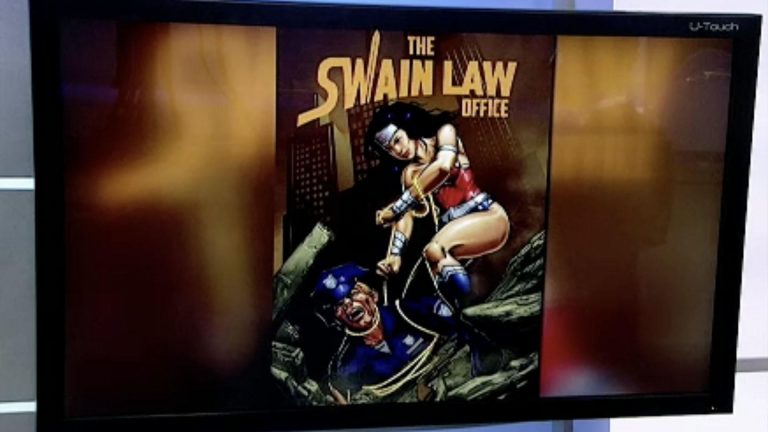 According to the station, Swain said:

In the criminal justice system, truth is at the heart of every case because the Constitution ensures that each of us is presumed innocent until proven guilty. As a criminal defense attorney for nearly 17 years, I have seen firsthand the injustice that can be doled out at the hands of less-than-honest police officers. I have been involved in many cases where the truth was ignored and people’s lives were destroyed. These are just some of the experiences that eventually led me to run for Attorney General of Kansas.

For the last several years, a poster has hung inside the front door of my law office. It shows a female superhero wielding a lasso of truth and using the lasso to force the truth from the mouth of a police officer, a metaphor for the rigors of cross-examination, which forms the cornerstone of a zealous defense. I understand that this picture has been misconstrued by many as advocating for violence against the police and for that I apologize. I am not anti-law enforcement; I am pro-truth. And I do not condone violence in any form.

As my campaign for attorney general moves ahead, I look forward to hearing from the citizens of Kansas about the critical issues facing our Attorney General and engaging in public discourse about my platform, which includes a commitment to true criminal justice reform, proper funding of our public school system, the legalization and/or decriminalization of marijuana and CBD, ending the war on drugs, increasing transparency surrounding police shootings of citizens, and much more.

“I understand that this picture has been misconstrued by many as advocating for violence against the police, and for that I apologize,” Swain said. “I am not anti-law enforcement. I am pro-truth. And I do not condone violence in any form.”

This photograph is disgusting in every single way, not only for the violence it demonstrates toward police, but also in the sheer arrogance it reeks of.

Does Swain really believe she is some sort of superhero fighting for truth and justice with her obvious negative attitude toward law enforcement officers? If she is really pro-truth, does that mean she’s pro-life too? You know, seeing as how the truth is, human life begins at conception?

The point is, the picture is distasteful and if she is really this hateful toward police, she should not be allowed to continue running for attorney general.