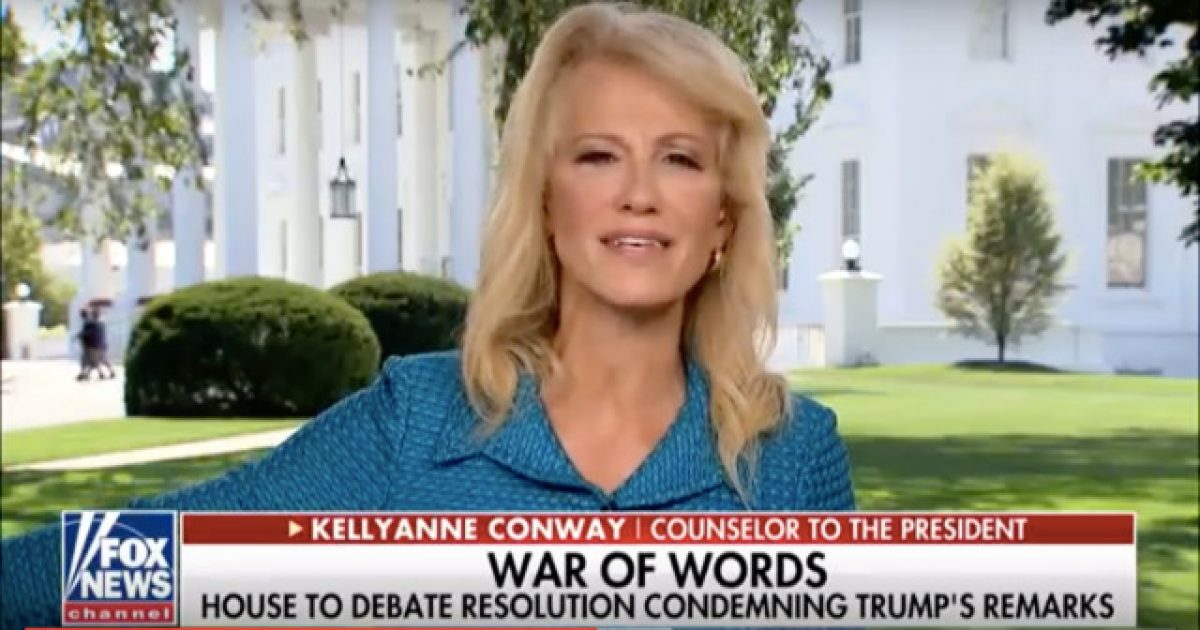 Regardless of what you think about Counselor to the President Kellyanne Conway, the truth of the matter is, she fits his administration like a glove, mostly because she’s not afraid to take her own off and get gritty with those who oppose this administration.

A good case in point is when Conway made a recent appearance on Fox News where she totally annihilated Rep. Alexandria Ocasio-Cortez and her companions in the “Squad” with just one line.

This is so, so good.

On Tuesday, appearing on Fox News, Counselor to the President Kellyanne Conway launched a fiery attack on the four female Democratic legislators who have been dubbed the “squad,” Reps. Alexandria Ocasio-Cortez (D-NY), Ilhan Omar (D-MN) Rashida Tlaib (D-MA) and Ayanna Pressley (D-MA), pointing out that they had no moral high ground to stand on criticizing the Trump administration when they themselves were the only four Democrats who voted against a humanitarian aid bill for the southern border. Conway snapped, “These four people in the so-called “squad” that have done squat in Congress other than pose on magazine covers and go on late-night comedy shows and cause trouble in their own caucus were under fire a couple short days ago by senior Democrats.” Conway also denounced people who had disrespected the American flag, the military, and also ripped the press for their fawning treatment of the four women.

Asked about President Trump’s tweets that seemingly targeted the four women and the Democrats who reacted with outrage, Conway responded:

The Democratic response is very predictable; you hardly need to cover it. It’s always racism, sexism, xenophobia, and it’s getting tired. These four people in the so-called “Squad” that have done squat in Congress other than pose on magazine covers and go on late-night comedy shows and cause trouble in their own caucus were under fire a couple short days ago by senior Democrats, elected officials; Greg Meeks, William Lacy Clay, Nancy Pelosi. Even Ayanna Presley threw a little shade at Nancy Pelosi yesterday in that press conference; it was more like a gaga in front of a bunch of supplicants who never challenged their factual assertions and just cover anything the four of them say without scrutiny and without examination.

But Ayanna Presley said “Our squad is more than four people.” If Nancy Pelosi said they’re just four people, they only have four votes, a glass of water could have won their districts … these four women are distinctive for one reason I want America to know: they are the only four Democrats to vote against any form of humanitarian aid at the border when that vote was taken two weeks ago. They have no moral authority to ever talk about the border and the kids and the humanitarian crisis there. They are the only four Democrats to vote against the Democratic package and the package that got signed into law. I was at the border last Friday; that aid is already making a difference in terms of the conditions down there.

I disagree with that assertion, Bill; what the President is doing — we’re sick and tired of many people in this country. Forget these four. They represent a dark underbelly in this country of people who are not respecting our troops, are not giving them the resources and the respect that they deserve. They voted against the military aid. They voted against pay raises, they voted against the $716 billion that this president has put forward. They scoff at things like the V.A. Choice Act, the Whistleblower and Accountability Act. We’re the ones helping veterans and military in this White House. We’re tired of people not kneeling for the flag out of disrespect. We’re tired of some of these women paling around with terrorists. One of them is in pictures with somebody who was responsible for the murder of three Israeli soldiers. Where is the press? Stop falling down on the job. Stop being so afraid of and adoring of four people who got here a few short months ago.

This fiery takedown is precisely why Conway and Trump make such a good team. Neither one of these two are afraid to speak their minds and let the truth speak, regardless of how it might make them look to others.

And when it comes to AOC and her ilk, it’s time for folks on the right to come out swinging against her and make sure neither she nor her buddies get re-elected to office. Not just for the sake of our country politically speaking, but also for the sanity of all of us who have to hear and write about the neverending list of horribly stupid things they say.