While Joe Biden was in Shanksville, Pennsylvania, with “doctor” Jill to commemorate the downing of Flight 93, a group of kids hilariously trolled Biden right to his face.

Biden took a second to take a photo with a group of eight kids, most wearing Trump regalia.

There is a LOT of Trump stuff going on in this photo.

The tallest girl has a red Trump hat on, while the girl to her right sports a blue Trump cap. The taller girl is also wearing a USA shirt — that surely makes Democrat Biden wretch, too. Kids wearing patriotic gear makes all Democrats sick.

Then there is the boy wearing a red Trump shit that hilariously reads, “I’ll be back.”

If you look at the faces of these cherubs, you can tell that every one of them, are in on the joke against Biden, too. 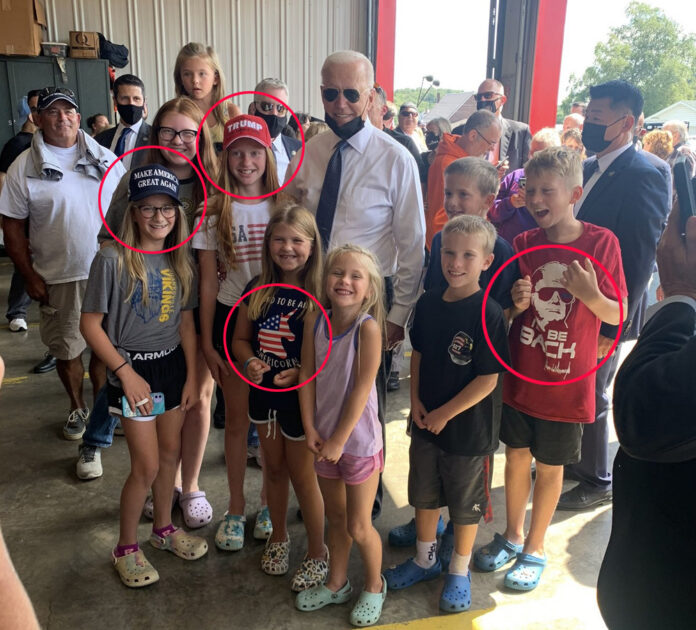 We may not always see eye to eye, but we can all come together to be UNITED! My daughter Ryleigh is sporting her blue Trump hat! 💙🇺🇸❤️ @kayleighmcenany @DonaldJTrumpJr pic.twitter.com/f8f2ibdtah

Biden also found a less than welcoming atmosphere at several of the events he tried to attend over the weekend:

And that isn’t to even mention all the stadiums erupting in chants of “fuck Joe Biden”… oops, I just mentioned it.