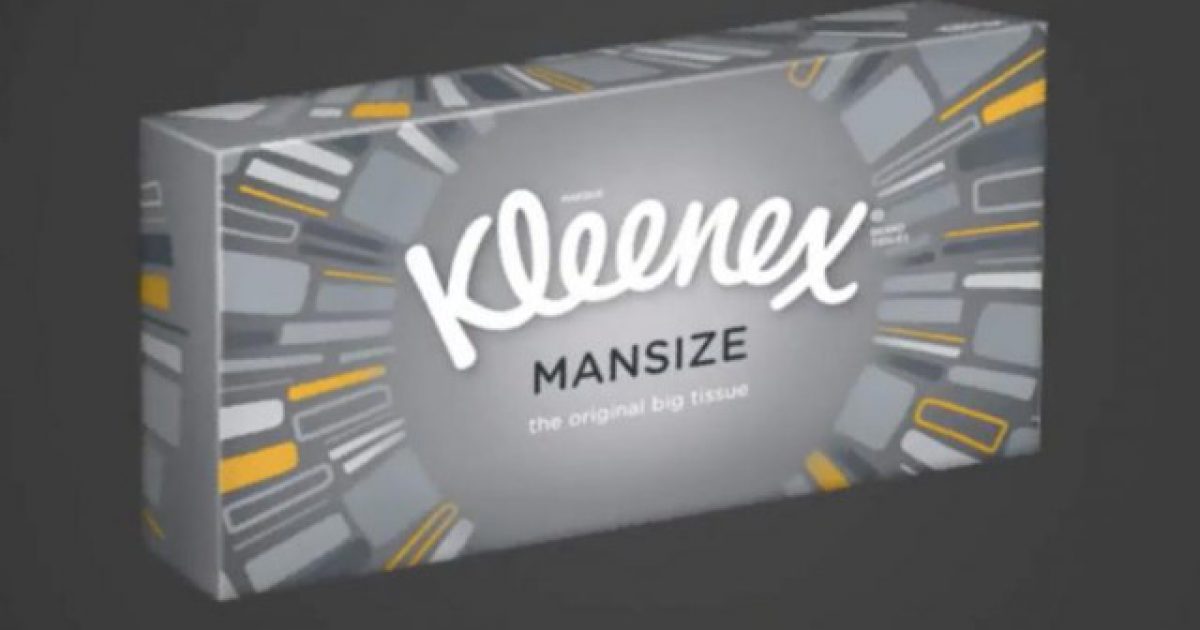 Kleenex brand tissues recently decided to create a new product called “mansize” tissues, which is not only hilarious, but very practical. However, as you can imagine, such an item did not go over well in our overtly politically correct climate.

It didn’t take long for folks to hit the social media platforms and start calling the product “sexist,” which has led to Kleenex rebranding the product. Yes, apparently products designed for men are now sexist.

According to a report in the U.K.’s Telegraph, the “Mansize” tissue — which is the country’s most popular tissue — will undergo a facelift so as to not offend those who believe assigning a gender to tissues is wrong.

In a statement, the company said that they received a “consistent increase of complaints on gender concern,” and as a result, they will rebrand the tissues as “Kleenex Extra Large.” Instead “Mansize,” the tissue box will now boast phrases like “comfortingly soft” and “confidently strong.”

A spokesperson for the company told the outlet that the company “in no way suggests” that “comfortingly soft” and “confidently strong” are “exclusively masculine [traits], nor do we believe that the Mansize branding suggests or endorses gender inequality.”

“Kleenex Mansize tissues have been on shelves for the past 60 years. Over that time, the brand has always been characterised by a much larger tissue size, which is both soft and strong,” the company statement read.

“It was launched at a time when large cotton handkerchiefs were still very popular and Kleenex offered a unique disposable alternative,” the statement added. “Despite that our consumer service is registering consistent increase of complaints on gender concern related to Mansize subbrand.”

“Kimberly-Clark in no way suggests that being both soft and strong is an exclusively masculine trait, nor do we believe that the Mansize branding suggests or endorses gender inequality,” the statement explained. “Our Mansize tissues remain one of our most popular products, with 3.4 million people buying these tissues every year.”

“Nevertheless,” the statement concluded, “as we remain committed to developing the best possible products for our consumers and take any feedback extremely seriously, we decided to renovate our current product and update the product subbrand as Kleenex Extra Large.”

Sam Smethers, a chief executive for the Fawcett Society, a hardcore feminist campaign group has approved of Kimberly-Clark’s changes to the “mansized” tissues and has praised the moves the company is making to capitulate to the far left’s gender neutral agenda.

At the end of the day, it seems sort of silly to make a big deal out of tissues, but it seems folks these days are perpetually offended, always managing to take small, insignificant matters and blow them up into dire, urgent causes negatively impacting the whole human race.

Descendant of Pocahontas Has Harsh Words for Liz Warren

What Jeff Sessions Just Announced Will Have Americans Cheering