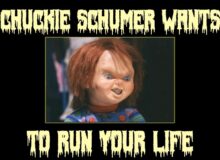 A Kentucky family suffered a horrible tragedy during the devastating flooding that swept parts of the state on Thursday.

According to the Lexington Herald-Leader, Brittany Trejo said her four young cousins were taken from their parents arms by the flood waters in Knott County, Kentucky.

The youngest was one-and-a-half years old, and the oldest was eight.

Trejo said the parents, Amber Smith and Riley Noble, made every attempt to save their children after their home filled with water.

“They got on the roof, and the entire underneath washed out with them and the children,” Trejo told the Herald-Leader.

“They managed to get to a tree and … held the children a few hours before a big tide came and wash them all away at the same time.”

After the children were taken from them, Smith and Noble reportedly remained stuck in the tree with no course of action to save them.

“The mother and father was stranded in the tree for eight hours before anyone got there to help,” Trejo said.

On Friday, Kentucky Gov. Andy Beshear confirmed the bodies of all four of the children had been recovered. They were among at least 14 people who were confirmed to have died in the floods in Knott County as of Friday afternoon.

Losing a child is one of the most tragic fates imaginable for a parent. Losing four at the same time is almost unthinkable.

As this family grapples with the tragedy, they most certainly need our prayers. We should pray the Lord would provide them comfort as they navigate this period of mourning.

Sadly, Smith and Noble are not the only ones who need prayers after losing love ones from the Kentucky floods.

On Sunday, CNN reported the death toll from the floods in much of the eastern portion of the state had risen to at least 25. Beshear said the toll is very likely to “get worse.”

He said his main focus on Sunday was “to get as many people to safety as possible.” National Guard members from Kentucky, Tennessee and West Virginia are just some of the people who are responding to the tragedy.

Related:
Is It Time for Red States to Forms a NATO-Like Alliance?

“It is a really hard thing right now, with how wide the destruction is (and) areas that are impacted, to get any firm number on people that are missing,” Beshear said.

Even amid the uncertainty, he shared a message of encouragement to his constituents in a tweet on Saturday.

“To everyone in Eastern Kentucky, we care about you and we love you,” Beshear wrote. “We’re going to do our very best to do everything we can to help you.”

To everyone in Eastern Kentucky, we care about you and we love you. We’re going to do our very best to do everything we can to help you. ^AB

As authorities continue to search for those who are missing and rescue as many people as possible, Americans must continue to pray for God’s providence during this tragedy.

Grant Atkinson, The Western Journal
Is It Time for Red States to Forms a NATO-Like Alliance?
Pentagon Chiefs Getting Chilling Silence When Trying to Contact China
Pelosi Mocked for Story About Digging to China: 'We Are Truly Led By Imbeciles'
Scientist Admits Fraud: Invalidates 'Distant Star' Supposedly Photographed by $10 Billion Telescope
Assaults on Seattle Firefighters Skyrocket So High That It May Impact Critical Services
See more...
Advertisement