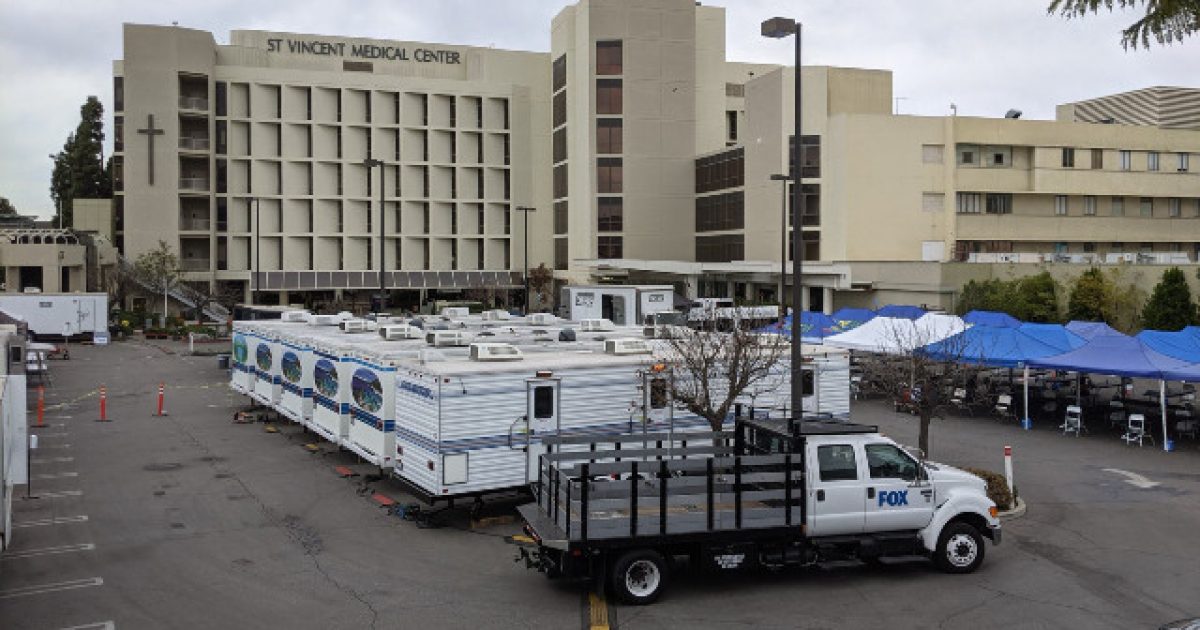 California officials have been making a lot of noise of an impending wave of COVID-19 infections lately, but yet, for whatever reason, a full Hollywood production has been allowed to take over a shuttered Los Angeles hospital that was briefly opened earlier this year to treat coronavirus patients.

If you happen to pass by the former St. Vincent Medical Center, you’ll immediately notice that the parking lot is chock full of trailers that are typically used when movie studios or TV production companies are on-location for film shoots.

A truck was spotted in the lot that belongs to Cinelease, which describes itself as “a market leader in lighting and grip equipment rentals.”

There are also tents covering outdoor dining areas and a line of cooks hard at work preparing meals.

What could be interpreted as a makeshift crew parking sign pointing to an indoor lot reads “TRIAGE,” a common word around hospitals but also the name of a pilot greenlit by ABC executives earlier this year.

After a shortage of intensive-care unit beds triggered a regional stay-at-home order throughout Southern California and beyond, public health authorities have been warning of a wave of new infections from Thanksgiving gatherings that is about to hit.

Dr. Patrick Soon-Shiong, a billionaire who owns The Los Angeles Times, purchased the former 366-bed hospital out of bankruptcy earlier this year for $135 million. After a federal judge approved the sale on April 10, The Times reported that its owner “plans to create a coronavirus research facility on the campus” that would “attract doctors and experts on the virus” and “relieve pressure on other hospitals.”

The bankruptcy judge presiding the case went on to try and convey a sense of urgency for those involved to go ahead and complete the transaction. Judge Ernest M. Robels said, “there is a risk that the purchaser will walk away if the sale does not close promptly, since the purpose of the sale – establishing a research center to address the COVID-19 pandemic – would be defeated absent a prompt closing.”

So the question that needs to be asked is if there’s a second wave coming that is as disastrous as they claim, why aren’t all resources, like St. Vincent Medical Center, being fully utilized to ensure that beds are available for those who are ill and need them?

Why is a film being made there instead of being prepared to reopen and treat patients again?

Perhaps it’s because there isn’t probably going to be a massive wave? Maybe, just maybe, these folks are fear mongering.

Just some food for thought.