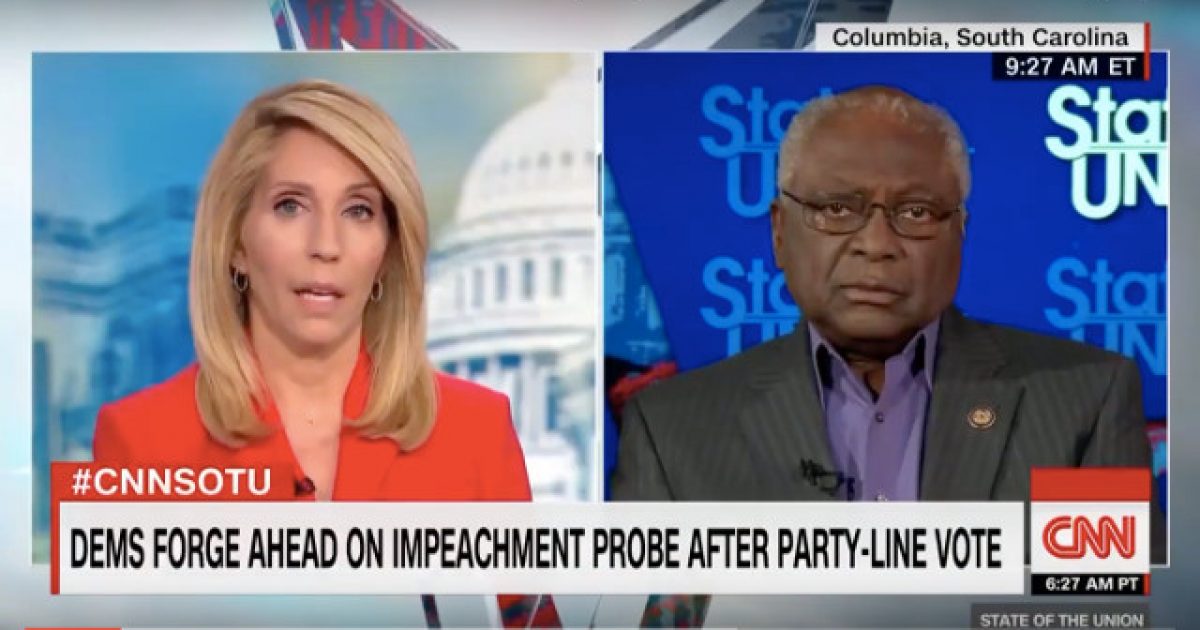 Democrat Rep. James Clyburn, who is the House Majority Whip and the third-ranking House Democrat, confessed on Sunday that pursuing after impeachment is a move that could end up backfiring on the Democratic Party in a big way during the 2020 presidential election, but the risks of the measure aren’t going to dissuade them from trying it anyway.

Recent polls have indicated that there’s a swell of support for Trump in states like Pennsylvania, Michigan, and Wisconsin, folks who don’t want to see the president impeached.

Clyburn was asked about all of this during an appearance on CNN’s “State of the Union” program on Sunday.

“Is it possible that this could have a negative impact on your party’s prospects in 2020?” host Dana Bash asked.

“Sure, it could,” Clyburn admitted. “And that would make this whole process much more political than I would like for it to be.”

The 14-term congressman explained that Democrats will continue to pursue impeachment even without bipartisan support because, for him at least, the process is about “preserving this republic.”

Clyburn went on to say, “I believe that this whole process, to me, is about preserving this republic, protecting the democracy that we hold dear. And I do not believe that we ought to allow our political feelings to get in the middle of this. This country is worth saving. And I do believe that we are in a crisis, much like that Thomas Paine wrote about back in 1776, when he talked about summer soldiers and sunshine patriots.”

Even more interesting, Clybrun went on to say that he has “no idea” what crime Trump has actually committed that would warrant impeachment. But then he continues on, saying that because he’s not sure there’s been a crime, that’s why they need the inquiry.