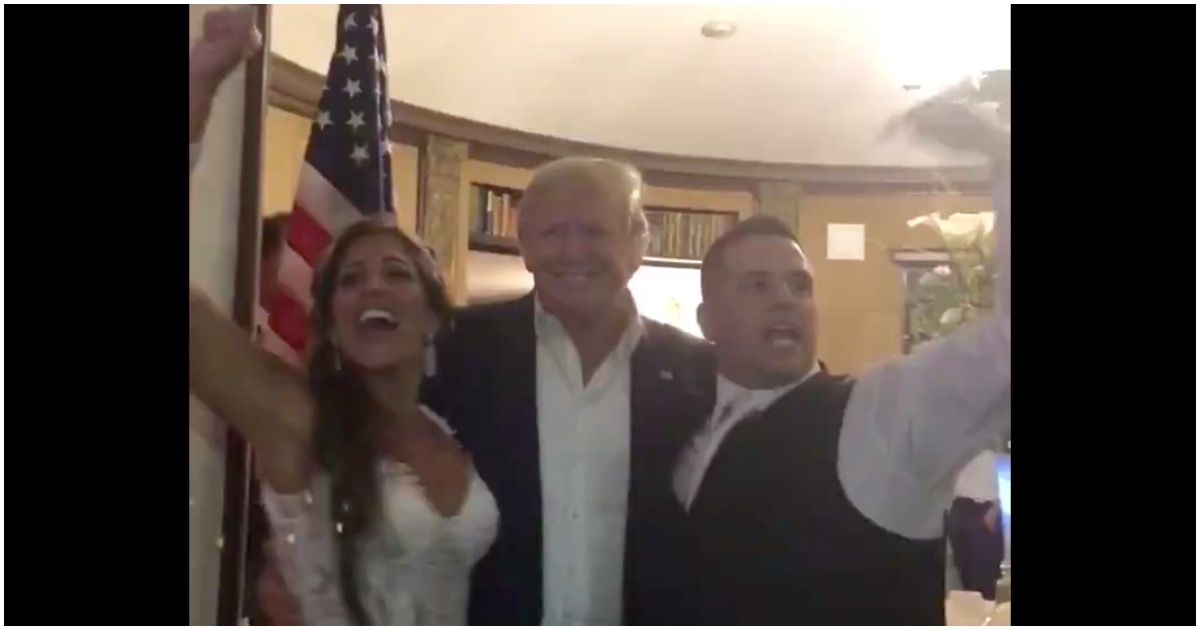 If you build it, he will come.

Talk about a lasting memory.

The wedding was complete with red hat-wearing guests and “Trump 2020” flags in the reception hall.

PJ Mongelli and Nicole Marie, who tied the knot at Trump National Golf Club Bedminster, are both “huge Trump fans,” TMZ reported. Nicole Marie reportedly sent several invitations to the president hoping he would come, “including a booklet that showcased encounters that she had with him, including rallies and Trump parties,” according to TMZ.

So honored to have President Trump @realDonaldTrump at my brothers wedding last night at @TrumpBedminster . Thank you for making their dream come true! #45 #KAG #2020 #USA @realDonaldTrump pic.twitter.com/hwlxaIQpYH

Not only has Trump risen to the highest office in the land, but he has done so with the gusto of a cultural cataclysm.

His anti-establishment ethos, combined with his bombastic approach to politicking, has created quite a proud cult of celebrity around the Commander in Chief. Trump’s iconic phrases, mannerisms, and attitude have simply permeated the American landscape since his candidacy was first announced.

And, of course, there is the simply iconic “Make America Great Again” hat, with its bold, bright red color and piercing white lettering.

Now, as the one-millionth MAGA hat sale seems inevitable, the coveted cap is being held under lock and key…but it could still be yours.

…soon, the president’s re-election team plans to give away, as part of a fundraising contest, the millionth red “Make America Great Again” hat produced by the campaign since 2015. The campaign had Trump sign it.

In a fundraising email to supporters Tuesday, the campaign said anyone who contributed to the campaign that day would be automatically entered in the contest to win the hat. The president, the campaign said, signed the hat at his desk in the White House and plans to present it to the winner at an upcoming rally.

The hat is currently squirreled away, being “guarded” by John Pence – nephew of Vice President Mike Pence, and a staffer on the President’s reelection campaign.

In determining the “millionth” hat, Trump’s team only considered hats sold officially through the campaign, and not the glut of counterfeits that have been produced over the course of the last few years.

Trump Got Up Early In the Morning & Fired the Killshot At Omar, Tlaib, & AOC Like It Was His Job