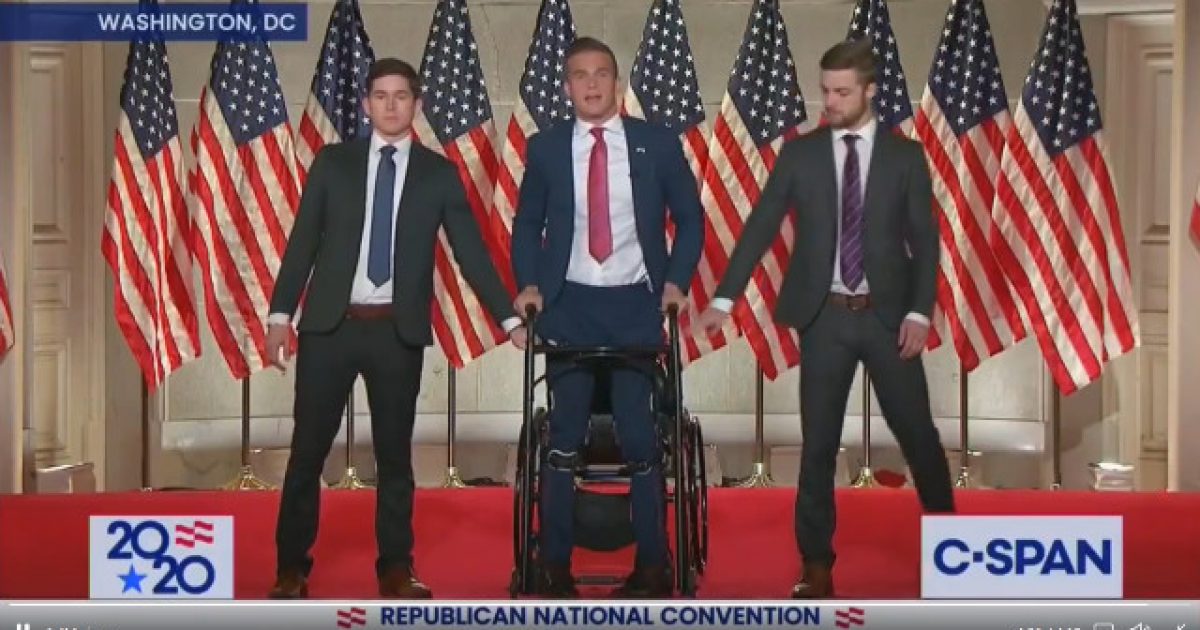 Madison Cawthorn is a 25-year-old Republican candidate for the 11th Congressional District in North Carolina. He’s also paralyzed. However, he’s not let that stop him from standing up boldly for the principles he believes makes this the greatest nation on earth.

During a speech given at the Republican National Convention, Cawthorn stood up and recited the Pledge of Allegiance in a touching moment of true, heartfelt patriotism.

However, the move didn’t sit well with a PBS journalist who attacked him for doing it right after. This did not go over well on social media.

Cawthorn standing to recite the Pledge was enough for PBS journalist Yamiche Alcindor to criticize him on Twitter, writing, “Madison Cawthorn made it a point to stand, suggesting that all Americans to (sic) should stand during the pledge of allegiance & national anthem. It was a direct rebuke of actions by ppl — including black athletes who are currently sitting out games — protesting police brutality.”

Madison Cawthorn made it a point to stand, suggesting that all Americans to should stand during the pledge of allegiance & national anthem.

It was a direct rebuke of actions by ppl — including black athletes who are currently sitting out games — protesting police brutality.

Cawthorn began by mentioning the terrible car accident that robbed him of the use of his legs, saying, “Instantly, my hopes and dreams were seemingly destroyed. I was given a 1% chance of surviving. But thanks to the power of prayer, a very loving community, and many skilled doctors, I made it.”

“My accident has given me new eyes to see and new ears to hear; God protected my mind and my ability to speak, so I say to people who feel forgotten, ignored and invisible: I see you. I hear you,” Cawthorn stated.

Cawthorn continued on, “In times of peril, young people have stepped up and saved this country, abroad and at home. We held the line, scaled the cliffs, crossed oceans, liberated camps, and cracked codes. Yet today, political forces want to usher in the digital dark ages. A time of information without wisdom and tribalism without truth. National leaders on the Left have normalized emotion-based voting and a radicalized identity politics that rejects Martin Luther King’s dream. MLK’s dream is our dream: for all Americans to be judged solely on their character.”

He then rose to his feet and said, “And be a radical for our Republic, for which I stand; one nation, under God, with liberty and justice for all.”

Conservatives took to social media to let Alcindor know what they thought of her egregious criticism, and boy, it was brutal:

Madison Cawthorn may be paralyzed, but @Yamiche is the one who is a completely broken person. Only a deranged lunatic who worships at the altar of politics could get angry at the sight of a paralyzed person standing up. What a sad, pathetic way to go through life.

If you thought, "certainly nobody could attack this man in a wheelchair for standing up at the end of his speech," you haven't met our completely insane White House press corps, currently viciously attacking a paralyzed man for not sharing their far-left political views. https://t.co/aDNqFg68hj

How on earth could you possibly turn the rather moving act of a FREAKIN' PARAPLEGIC rising for the national anthem into some weird BLM trip? When someone holds the door open for you, is that a rebuke of BLM too?

My patience for takes like this has reached its limit. https://t.co/p7EZPmzoj8

Alcindor is off her rocker to make such an awful statement. But, that being said, maybe it was a repudiation of people not standing for the pledge. Good. They need a sharp rebuke, a reminder of how good their country has been to them and how easy they have it here.

Sen. Tom Cotton Says He’s Going To ‘Expose’ Biden As Being ‘Weak And Wrong For America’ During RNC Speech