Pro-Abortion Hackers Take Their War to the Cyber Realm

Face it: Joe Biden HATES You And Wants You To SUFFER!
Conservative Firing Line

*NEW* BREAKING: Look What Biden Is BUILDING In Poland After The DISASTER In Afghanistan… Are You F**king Kidding Me?
America's Freedom Fighters

Liberal blogger and political provocateur, Anne Landman is once again doing her part to further divide America and to stir the pot between folks on the left and right, because, well, when you don’t have solid factual arguments to back up your beliefs you get personal.

Landman has put up a billboard as a public statement about her displeasure over President Trump’s relationship with Russian President Vladimir Putin, a sign that features the word “GOP” with a hammer and sickle, the symbol for the old Soviet Union.

The sign some motorists probably have already seen shows the GOP on an all-red background with the “O” replaced with a Soviet-era hammer and sickle.

“I bought the billboard myself for a week purely out of my own level of outrage and frustration over Trump’s secret meeting with Putin in Helsinki,” Landman said. “The things he did and said, trusting Putin over the conclusions of all of our own country’s intelligence agencies, blaming Americans for Russian cyber attacks on our election, making secret agreements, offering to consider handing Americans over to Putin’s intelligence agents to be interrogated, it was just unbelievable.” 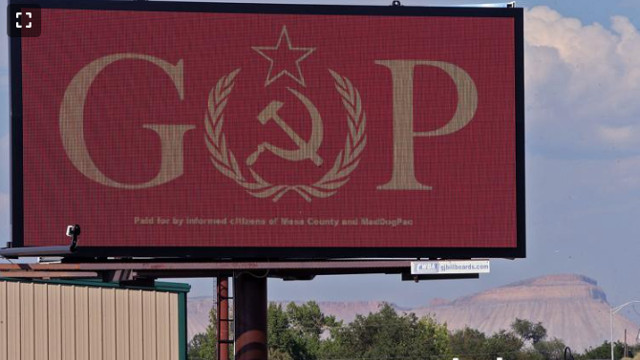 Landman said she has since received numerous donations from others around town to expand the billboards for a few more weeks.

She said the sign initially cost her $265 for a week. Since then, she’s collected another $1,696, and plans to post the sign, which currently is on an electronic billboard on U.S. Highway 6&50 at the Rimrock Marketplace, in at least two other locations.

Landman said she got the idea for the sign from a Facebook friend and contacted the owner of the image, MadDog PAC, a political action committee formed to raise money to build political opposition to Trump, for permission to use it.

So, apparently, having positive relations with another country is no longer diplomacy but is yet another reason to add to the ever growing list being compiled by the left to justify their protests and fancy art projects. Like this one.

Trump has simply attempted to regain respect for America on the geopolitical stage by being tough, but has also reached out to difficult nations as a means to have peaceful relations and avoid conflict.

Either Biden is hiring dolts, or the left has simply given up on hiding their true intentions.

A cancel culture effort to punish Justice Clarence Thomas by removing him from his teaching position has failed.
By Jack Davis, The Western Journal  July 1, 2022 Comment MoreShare

The US is increasing troops and military equipment in Europe and will now have a permanent presence in Poland.
By Abby Liebing, The Western Journal  July 1, 2022 Comment MoreShare