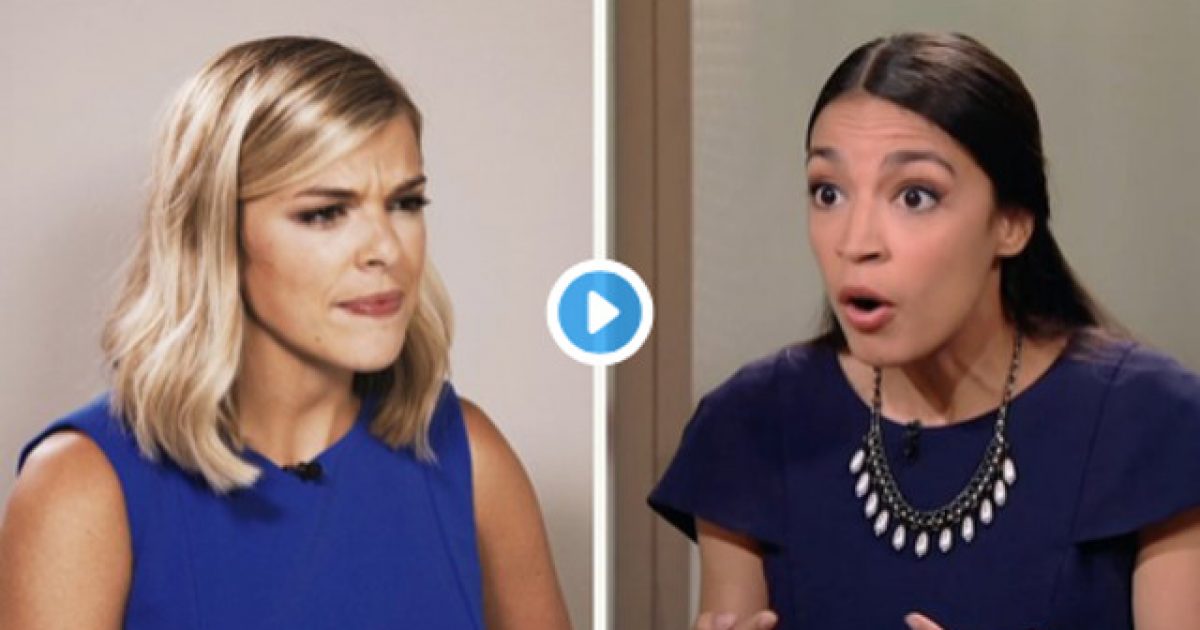 Earlier this week, CRTV posted a hilarious video of host Allie Stuckey conducting an interview with avowed socialist and Democratic House candidate Alexandria Ocasio-Cortez. In the video, Stuckey asks questions and Ocasio-Cortez answers via clips from her “Firing Line” with Margaret Hoover interview spliced into it.

The whole point of the video is to be humorous and satirical, but when you’re the radical left, who have spent the last several decades doing their best to suck all of the funny out of life with their outrageous political correctness standards, it’s easy for things that tickle the funny bone to go over your head.

Which is precisely what happened here. As soon as the video was posted and the left’s latest savior-in-training became the target of ridicule, they do what they do best and got outraged about it all.

On Monday, CRTV posted a video of host Allie Stuckey conducting an “interview” with socialist Democratic House candidate Alexandria Ocasio-Cortez. In the video, Stuckey asks questions, and footage from Ocasio-Cortez’s viral interview on “Firing Line” with Margaret Hoover is used for her “answers.” The footage is edited hilariously, humorously making Ocasio-Cortez look like she admits to having no idea what she’s talking about — and it’s obviously satirical.

For example, Stuckey asks, “Do you have any knowledge whatsoever about how our political system works?” and a clip shows Ocasio-Cortez shaking her head “no.” That’s almost as bad as Ocasio-Cortez’s real answers in the real interview with Hoover, where she blasted the Israeli “occupation of Palestine” before admitting she’s not a foreign policy expert and made totally silly claims about U.S. unemployment.

A doctored video of @Ocasio2018 has over a million views on Facebook. It takes her @FiringLineShow interview out of context to make it look like she doesn't know answers to questions she was not asked.
https://t.co/uU3oA7ooaf

Manipulated video to create entirely fake interview presented as real by verified account here and on Facebook where it has over 1.1 million views in less than 24 hours. https://t.co/P6E5LfQi3K

This faked interview of @Ocasio2018 by @CRTV has nearly 1 million views on Facebook. In less than 24 hours.

Not labeled satire (other than a ???? emoji).https://t.co/ipUPsOoyLH

Wow. This is Ocasio-Cortez's PBS intv w/ Margaret Hoover (https://t.co/OhjfHuWqQC) spliced together w/ a CRTV "interviewer." Notice that they never appear on camera together, and the interviewer shot is lit different + higher res? Took 1min on google to sort out. Reprehensible. https://t.co/khu8uXQnpV

While evening network comedy shows do doctored, joke interviews all the time, @conservmillen's fake interview with @Ocasio2018 is *not* obvious parody, is done in bad faith, and is extremely likely to deceive. Alarming. https://t.co/UgPVK5CLPN

Republicans are so scared of me that they’re faking videos and presenting them as real on Facebook because they can’t deal with reality anymore.

Ladies and gentlemen, this is the definitive proof you’ve all been searching for. Being a liberal does indeed require you to be brain dead. There’s simply no other explanation for getting this angry over something the Daily Show does on a regular basis.

At the end of the day, these folks want to dish out, but they can’t stand taking it. If you can’t stand the heat, get out of the kitchen. Those are words the left really needs to study and put into practice.

Stuckey hasn’t done anything wrong. It’s satire. If their new favorite “it girl” can’t hack being mocked and made fun of, perhaps politics is not the right career for her.

The idiocy of liberal America never fails to astound and amaze.